The Pacific Alliance initiative was a renewed attempt to advance the free movement of goods, people, services, and capital throughout Latin America’s Pacific Rim. The start of Australia’s free trade agreement (FTA) negotiations in 2017 was lauded as a major opportunity to advance trade in the Pacific, as the four states then comprised 35 percent of Latin American GDP, totalling nearly AU$ 2.3 trillion.

The Alianza del Pacífico, or Pacific Alliance, was created in response to a series of left-wing initiatives in Latin America during the 2000s, such as UNASUR and ALBA. In contrast to these groups, the Pacific Alliance was advanced by countries with right-wing governments eager to promote neoliberalism and economic liberalisation across borders. Indeed, within two years of its launch, the four member-states committed to the elimination of all tariff barriers between the countries by 2020.

The Pacific Alliance differed markedly from other Latin American initiatives in its outward-facing orientation. The alliance currently has 59 observer members, including Australia and New Zealand. This externally facing posture differs significantly from the similarly neoliberal MERCOSUR group, currently comprising the major economies of Argentina, Brazil, Paraguay, and Uruguay.

Australia and New Zealand were invited to become Associated States of the Pacific Alliance in June 2017 , marking their first step in negotiating comprehensive free trade agreements with the Pacific Alliance states. This initiative was a counterweight to the Trans-Pacific Partnership (TPP), which had become mired in controversy following the withdrawal of the US in January of that year. Australia’s objectives in the Pacific Alliance FTA involve the diversification of exports of products, including agricultural products and mining equipment, as well as services, such as international education and mining-related services.

Progress on negotiations for the FTA between Australia and the Pacific Alliance has slowed markedly. Five rounds of negotiations were conducted between 2017 and 2018, without tangible results. Crucially, the Pacific Alliance FTA was significantly sidelined by the signing of the Comprehensive and Progressive Agreement for Trans-Pacific Partnership (CPTPP) in 2018 – involving Chile, Mexico, and Peru as signatories from Latin America. President Joe Biden’s election and renewed US enthusiasm for multilateral initiatives, such as the CPTPP, now significantly reframe any future FTA between Australia and the Pacific Alliance.

There are currently additional internal impediments to cross-border economic integration within each of the four countries of the Pacific Alliance. The region has been severely affected by the current pandemic, which has limited global initiatives to open borders economically. The past two years also witnessed great political turmoil in member states. Chile has experienced major social protests since 2019, which have culminated in the start of a process to revise its constitution. Similar protests continue in Colombia, while Peru is experiencing a period of extreme political uncertainty. All four countries have presidential or legislative elections in 2021 or 2022.

The economic aims of the Pacific Alliance are particularly undermined by these political circumstances. It is difficult to imagine the success of a Latin American initiative tied closely to neoliberalism, given the rising popularity of left-wing governments and anti-austerity movements across the region. Even Latin American governments comprised of right-wing populists are frequently economic nationalists and opposed to the free market.

Integration with the Latin American Pacific Rim is an increasingly strategic option for Australia, whether via the Pacific Alliance FTA, the CPTPP, or other initiatives. Latin America currently represents fewer than one percent  and two percent, respectively, of Australia’s exports and goods. However, there is considerable scope for growth and enhanced cooperation around technology, capital goods, and industry-related services in the areas of agriculture and mining.

International education services, which are within the scope of both the Pacific Alliance FTA and the CPTPP, stand out as having particular potential for development in the regions’ commercial relations. International education was Australia’s fourth largest export before the pandemic, and Latin America has steadily emerged as a key market over recent years. Colombia was the seventh-largest source of international students in Australia in 2020,and Brazil, which is not in the Pacific Rim but is Latin America’s main economy, was the fifth. These two countries were the only non-Asian states among the top 15 sources of international students in Australia in 2020. 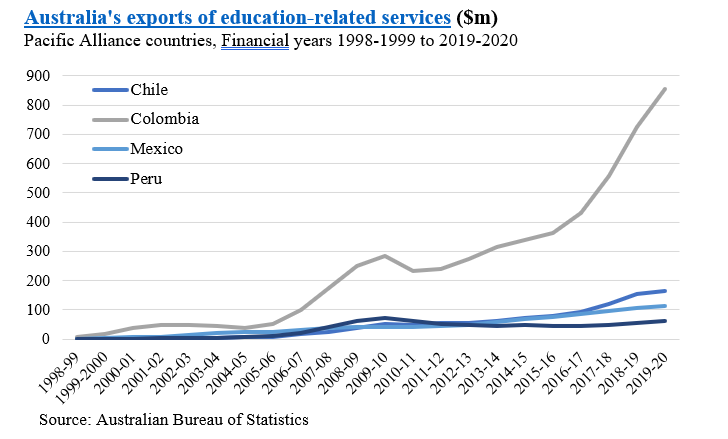 Our ongoing research shows that Latin American students in Australia are not merely temporary mobile students. Their condition as “international students” needs to be understood in the context of a complex, multistage migration journey within the contemporary Australian migration regime. For young, highly skilled Latin Americans, studying in Australia is a way to remain in the country, often with the goal of eventually migrating permanently. Those who return to Latin America do so with a robust cultural and social understanding of Australia, with the capacity to become future catalysts of trade and integration between the regions.

International education offers a significant area in which to develop trade relations between Australia and Latin America’s Pacific. Better exploring the reciprocal opportunities in the particular area of vcational education and training, which is a distinguishing factor of Latin American enrolments, provides a key opportunity to build on current trajectories of growth between the two regions.

The FTA negotiations between Australia and the Pacific Alliance, which commenced with such high hopes four years ago, now provide a bedrock of mutual awareness and trust from which to deepen and renew trade opportunities. The inclusion of international education in negotiations for both the Pacific Alliance FTA and CPTPP signals an early recognition of the area’s potential. While neoliberal trade initiatives in Latin America will likely remain difficult in the near future, the twin fields of education and migration provide significant potential to deepen trade and integration between Australia and Latin America’s Pacific, even in the absence of a Pacific Alliance agreement.

Rafael Azeredo is a PhD candidate at Griffith University, Australia. His research explores Brazilian migrants in Australia in relation to their interaction within the migration regime and sense of community. He has over 10 years of experience working with Latin America–Asia-Pacific relations in the context of business, migration and education.

Advantages and Disadvantages of AUSFTA in the Automobile Industry

The Australia-United States Free Trade Agreement came into effect on the 1st of January 2005, after being signed the previous year. It has since allowed easy and greater access to Australian products into the United States.

With the Prime Minister promoting an EU-Australia trade deal during his visit to Europe last month, it's worth looking at the projected benefits and opportunities, in particular for strengthening Spain-Australia links.

This week in Australian foreign affairs: Payne’s statement on consular support for Australian journalists in China; the announcement of several diplomatic postings; DFAT’s new Hardship Program for Australian citizens struggling to return from overseas; and more.