This week’s Commonwealth Heads of Government Meeting in London takes place amidst an outcry against the threatened deportation of the children of the Windrush generation who immigrated from the Commonwealth Caribbean.

A warm welcome, a snarling dismissal

The Empire Windrush was the vessel on which many Commonwealth citizens emigrated to the United Kingdom (UK) from the Caribbean. They accepted the warm invitation to work hard and contribute to Britain. Many of the children and younger people who travelled on the vessel, “the Windrush generation”, are thought to have done so under their parent’s passports and papers.

The UK Home Office has at best made an administrative error with the associated paperwork, and at worst actively destroyed it. In doing so, a terrible scenario has been created whereby people who have lived and worked their whole adult lives in the UK are having their immigration status queried.

Jobs have been lost, people have been put through inexcusable stress due to the threat of deportation, investigations are ongoing as to whether some have been deported, and now it has emerged that Dexter Bristol, a gentlemen who emigrated to the UK from Grenada in 1968 has “died suddenly while embroiled in turmoil over his immigration status.”

On the 70th anniversary of the Empire Windrush’s arrival, the UK’s original warm faced welcome has been countered by a sickening display from its other face. Orthrus, the two-headed dog of Greek mythology, has been allowed to emerge as the model by which the UK conducts its affairs.

A meeting of friends

The Commonwealth Heads of Government Meeting (CHOGM) began in London this week under the theme, “towards a common future.” The importance of this particular session has been brought into focus with the Head of the Commonwealth, Queen Elizabeth II, reducing her working commitments at the age of 92; the UK’s ongoing negotiations to leave the European Union; increasing barriers to international trade; and interest in how the positive sentiment generated at the Commonwealth Games can be harnessed to support “a more prosperous, secure, sustainable and fairer future for all (their) citizens.”

As Alexander Downer AC, Australian High Commissioner to the UK succinctly put it: “there is no doubt the British government, as it leaves the EU, is investing more in the Commonwealth.”

But the UK attitude and performance at CHOGM2018 will be closely scrutinised. The potential of the Commonwealth is found in unique relationships and the willingness of partners to support each other: to listen, to make changes that will benefit one another, and to provide their unique expertise to assist a friend.

Britain’s ability to demonstrate it can act for the common good as a friend among equals must be demonstrated if its intentions to invest more in the Commonwealth are genuine, and it will be judged by Commonwealth partners accordingly. As the world’s fifth largest economy and a permanent member of the UN Security Council the UK can do much to help fellow Commonwealth members. It must grasp however, that it is through cultural intelligence and a collaborative spirit that progress will be made.

It is from this international perspective that we view UK Prime Minister Theresa May’s initial refusal of the request from representatives of 12 Caribbean countries for a meeting to discuss the children of the Windrush generation.

As the BBC has reported, “thousands of people who arrived in the UK as children in the first wave of Commonwealth immigration face being threatened with deportation. They have lived and worked in the UK for decades but many are now being told they are here illegally.”

Following thorough media coverage, the expression of hurt and astonishment on social media, the signing of a petition and significant work by members of the British parliament, the Home Secretary Amber Rudd apologised and launched a series of steps to correct this error. Prime Minister May has subsequently agreed to meet with the Caribbean officials who first requested to talk with her.

The matter will also be debated in the House of Commons on Monday 30 April after more than 100,000 signatures were submitted in support of a petition calling for “an amnesty for anyone who was a minor that arrived in Britain between 1948 and 1971.”

Orthrus off the lead

Several factors have combined to heighten the expectation and potential of CHOGM as a force for good, a forum for mutual benefit. But the UK administration has responded as Orthrus: as one head speaks openly and welcomes fellow Commonwealth guests to the UK, the other has been observed as snarling, aggressive, and has taken a bite out of the collaborative spirit of the Commonwealth with its cruelty towards Caribbean Commonwealth citizens. Such akrasia, with one head acting against the better interest of the other, asks questions of the UK’s true intentions and how it sees itself in the Commonwealth. 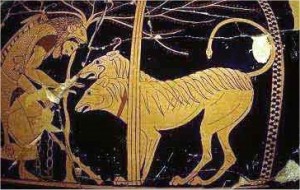 That this situation was ever allowed to emerge points to a lack of respect for those who have worked hard their whole lives to make a meaningful contribution, and perpetuates a view of an uncaring, dastardly persona, cut-throat in its logic, and swaggering with a superiority complex. How could Orthrus possibly have been let off the lead at such a critical juncture in UK foreign affairs?

Following the attempt to correct the initially abhorrent response, there is now an opportunity to demonstrate true care, insight and the humbleness to swiftly rectify the Windrush situation on the domestic front, whilst binding the Commonwealth friends together for the common good of their citizens on the international side.

Commonwealth partners may question the sincerity of a friend whose immediate response to its own administrative error is to adopt an ‘us and them’ attitude that cuts across years of shared history. Friends make mistakes. They apologise. It is how they then act that defines them and ultimately determines the future of that friendship.

The UK must realise that its Commonwealth partners cannot accept such duplicity. This Orthrus approach must be reined in, and a return to the ancient Greek concept of xenia, demonstrating true and generous hospitality, would be advised.

Jonathan Prosser is group general manager of strategy and growth at the Cronulla Sharks NRL club and a director of Australian health charity, Ruby Red Foundation.

Britain and France cooperate significantly in the domains of defence and diplomacy. As such, Whitehall must ensure that through Brexit, Britain’s strong relationship with France is preserved.

Sweden is Not Falling Apart

Sweden is recovering after a very tense election night. The centre-right and the centre-left blocs secured very similar shares of the vote, but neither have come away with quite enough leverage to form government alone.