Japan’s response to the COVID-19 pandemic attracted the world’s attention. The country’s unconventional approach to combating the disease serves to throw the lockdown logic into question.

On 18 January, the world total of COVID-19 cases was 95,484,666, with 2,039,695 deaths. Japan’s figures were 322,296 cases and 4,446 deaths. It was in a minority of countries where the disease killed more people in the autumn and winter than in the first wave in spring (Figure 1). The seven-day moving average of new daily deaths in the spring peaked at 23 on 5 May. It’s been higher every day since 2 December, and on 13 January it was 61. For balance and perspective, however, it’s worth noting that more Japanese died from 25 other causes in 2020 (Figure 2) and COVID-19 accounted for only 0.3 percent of all deaths, compared to about three percent of all global deaths. There were seven times as many suicides (23,749) and 41 times as many flu and pneumonia deaths (141,664). Japan was also one of the few countries without excess mortality caused by COVID-19. 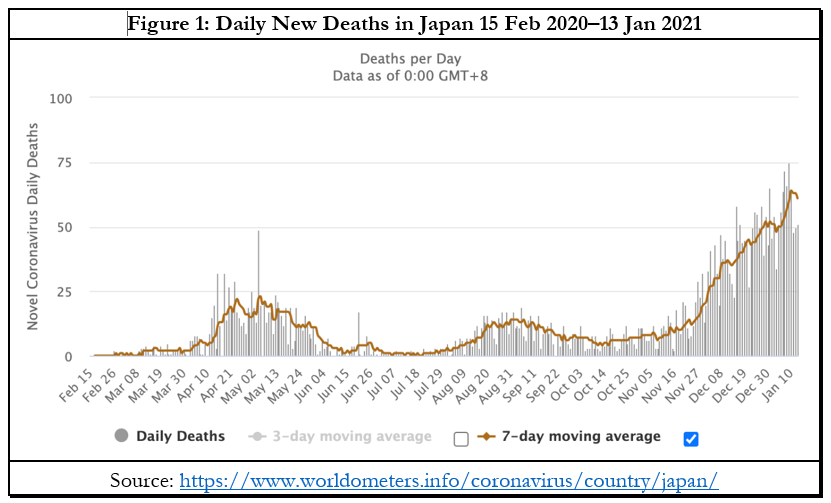 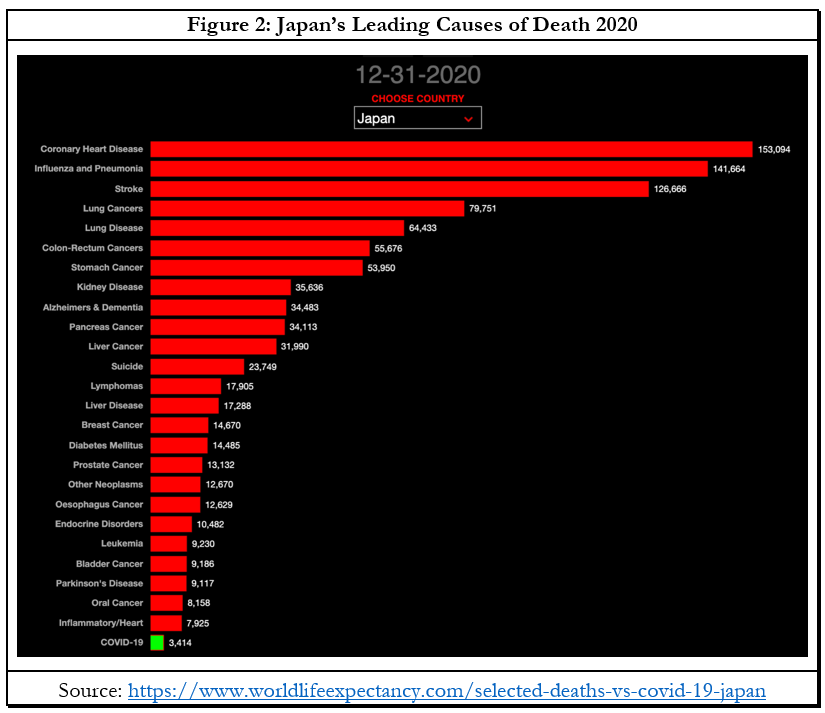 Japan attracted world notice for neither imposing a lockdown nor testing the asymptomatic obsessively. The Stringency Index from Oxford University’s Blavatnik School gauges the strictness of nine lockdown measures including school and workplace closures, and travel bans, with 100 being the strictest. Japan’s index stayed below 50 until 8 December, whereas all its G7 partners have mostly stayed above 50.

This created a pandemic of fear about the threat of COVID-19 deaths that would ravage Japan. When the Diamond Princess docked in Yokohama early last year with 700 infected passengers, of whom 14 died, Kentaro Iwata of Kobe University described the cruise ship as a “Covid-19 mill.” An article in The Washington Post on 20 February said Japan’s response was “completely inadequate.” By early summer, while Tomoya Saito was writing that Japan had “successfully minimized COVID-19-related deaths without introducing a strict lockdown or a broad testing policy” and pursuing a cluster-focused approach instead, much of the Western media was harshly critical and predicting mass deaths.

On 7 April, The New York Times asked if Japan’s COVID-19 emergency had come too late. In the Washington Post, William Pesek said “Japan’s coronavirus response is too little, too late.” He advised Prime Minister Abe Shinzo to “dispense with the pandemic kabuki and call for a strict shelter-in-place policy.” Science magazine asked on 22 April if Japan had missed “its chance to keep the coronavirus in check.” On 25 May the Washington Post reported Japan had ended its “soft lockdown” as part of an “idiosyncratic” policy of living with the virus. On 11 August, Pesek warned Japan was “sitting on a ticking time bomb.” The ABC noted “How Shinzo Abe has fumbled Japan’s coronavirus response.” Many other countries must wish they could fumble with equally spectacular outcomes! Medical experts began spouting scare scenarios once again with the second wave in winter.

Japan should ignore the Henny Pennies of the West. European countries and US states with hard lockdowns have fared no better over the autumn-winter surge of the virus than their softer counterparts. The mainstream media has been on a mission to cheerlead the lockdown narrative and countries like Sweden and Japan have been the focus of attacks to discredit their departure from the approved narrative. Real-world examples of non-lockdown countries with similar or better outcomes as lockdown countries, but without the accompanying massive health, mental health, livelihood, economic, and civil liberties harms, should be welcome. Instead, many commentators seem secretly willing the soft and no-lockdown countries to fail.

Yet there’s little empirical data to support the efficacy of lockdowns. The virus is not unprecedented, but the draconian societal shutdowns, which overturned the existing scientific consensus, are. Who would have believed this time a year ago that Western democracies would so enthusiastically mimic China’s authoritarian behaviour and be cheered on by citizens for doing so? After a year of this extreme experiment, data from around the world show that the spread of the pandemic correlates more with geography, demography, and seasonality than lockdown stringency and sequencing. This headline from 23 December would be funny if it wasn’t tragic: “Locked-down California runs out of reasons for surprising surge.”

Europe accounts for three times as many COVID-19 deaths as its share of world population, North America six times, and South America 2.3 times (Table 1). By contrast Oceania has only one-twelfth, Africa one-fifth, and Asia (including Central and West Asia) one-third their respective shares of world population. East Asia is the star performer. The average mortality for China, Hong Kong, Mongolia, South Korea, and Taiwan on 15 January 2021 was 6.2 deaths per million people (DPM). Within East Asia, Japan has the highest mortality with 34 DPM. To put that into global context, the world average was 256 DPM and some of the worst performing in Europe – all hard lockdown countries – were Belgium 1743, Italy 1338, UK 1245, and Spain 1135 DPM. Another relevant comparison is with Japan’s fellow G7 countries. The average for the other six countries, all of which had stringent lockdowns, was 1072 DPM on 14 January.

What might explain the variation by continents? In Africa and most of Asia minus East Asia, average life expectancy is much lower.COVID-19 is highly age-segregated, attacking those over 75 with particular ferocity. Part of the reason for life being nasty, brutish, and short in the developing countries is that, proportionately, far more people with serious ailments succumb earlier owing to healthcare shortcomings than in the industrialised high-income countries, and COVID-19 is far deadlier for people with comorbidities. Thirdly, in countries like India, universal BCG and polio vaccination is mandatory, while the immune systems of people have a lifelong exposure to curative and preventive drugs for malaria. Research by Indian scientists suggests that exposure since childhood to an extensive range of pathogens has given Indians sturdier immunity to COVID-19. Another study suggests a similar conclusion holds for sub-Saharan Africa.

East Asia has been the geographic origin of several modern epidemics. One team looked at human genomic datasets for possible explanations for their strikingly lower rates of COVID-19 infections and mortality. Their results indicate that ancient COVID-19-like epidemics drove adaptations in East Asians between 25,000-5,000 years ago. The winter surge shows that even in Japan, where it is far more socially prevalent, face masks did not prevent infection and transmission. This too strongly suggests that an exceptionally low death rate despite a high proportion of elderly – Japan’s life expectancy of 84.2 years is the highest in the world – must be due to genetic factors, health factors (e.g. low rates of obesity), and preexisting immunity. Whatever the mathematical modellers afflicted with obsessive-compulsive lockdown disorder might say, in the real world, lockdowns are a high-cost but low-impact policy intervention.

Ramesh Thakur is emeritus professor in the Crawford School of Public Policy, Australian National University, Senior Research Fellow with the Toda Peace Institute, and Fellow of the Australian Institute of International Affairs.

This is an adapted version of Ramesh Thakur’s article, “The West should envy Japan’s COVID-19 response,” originally published in The Japan Times. It is republished with permission.

As parts of their Special Strategic Partnership, Australia and Japan have formally signed a Reciprocal Access Agreement. This will enable even closer cooperation between their respective military forces, including training, base access, and logistics.

The Tokyo 2020 Olympics have been postponed until next July, but they may not be held at all. Given the current pandemic malaise, Olympic hoopla could be just what the world needs, but the exorbitant cost of postponing the games has tempered enthusiasm in Japan.

The COVID-19 pandemic has hit developing communities in ways which further highlight the need for data and evidence that can help them rebound better from the impact. Australia has an important role to play in supporting regional recovery.