On July 17, the Institute welcomed renowned academic and internationally-respected China specialist Professor Bates Gill for a discussion on US relations with Asia under Donald Trump.

Professor Gill structured his presentation into three parts. In the first part, he explored Trump’s policy on Asia over the past two years. From the beginning, since the 2016 US presidential elections, Trump’s emphasis on the ‘America First’ policy sowed the seeds of doubt for America’s role in the region. Although his 2017 trip to Asia offered encouraging signs for American engagement in the Asia-Pacific to some extent, his approach to Asia in the first year of presidency ultimately lacked consistency, something that the region needed most.

The second part of Professor Gill’s presentation focused on present day developments in US engagement with Asia. Under Trump, the US has developed a more confrontational approach to China, especially on terms of trade. This did not bode well with many of the US’s allies, most of whom did not see a positive relationship with China as a zero-sum game.

Furthermore, even though the Singapore Summit was seen as a huge success by the Trump administration, there was no substantive outcome to eventuate from the summit. On the contrary, Trump’s promise to freeze military exercises in exchange for the de-nuclearisation of North Korea upset allies like Japan and South Korea who were not consulted on the US’s plan. 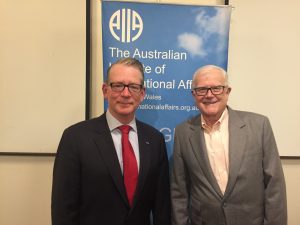 In the final part of the presentation, Professor Gill highlighted the key takeaways from Trump’s Asia policy thus far. Professor Gill noted that the countries that have benefited the most from Trump’s Asia policy are China, and to some extent, North Korea. Therefore, in the future, we should probably expect a nuclear-armed North Korea, in spite of the agreement from the Singapore Summit.

Trump’s contempt for the alliance system will also lead to less allied cooperation, and consequently, the US and its allies will be more susceptible to wedge tactics from countries like Russia and China. Nevertheless, Professor Gill expressed that American interests and policies in Asia should converge again at some point in the future as the Asia-Pacific remains fundamental for the prosperity of the US.

In response to questions, Professor Gill said the upcoming US midterm elections are hard to predict; Trump’s popularity remained high. He did not agree that the impact of Trump’s meeting with Kim Jong-un was comparable to Nixon’s visit to China in 1972:  unlike Nixon’s Beijing visit, the Singapore Summit had very little strategic forethought and provided no clear roadmap as to how to move the relationship forward.