A survey of Australian attitudes toward the European Union shows concerns about Brexit, economic troubles and neighbourhood crises—but also many areas for cooperation, including in research and innovation.

One of the foundation elements of the work of the EU-Australia Leadership Forum has been to look at the perceptions of the European Union among key Australian stakeholders. This article summarises some of the main findings of that study.

It was decided early on that the study would be based on a series of semi-structured interviews with knowledgeable individuals. We identified a number of organisations to ensure a combination of those that had existing links to the European Union in some way, as well as those that did not.

We had an encouragingly positive response to our request for interviews and in the end 17 interviews were undertaken with 23 leading people from academia, business, politics and civil society. Interviewees were asked:

While feelings about Europe are generally positive, respondents are worried about political and economic crises besetting Europe, such as Brexit, the refugee crisis and anti-globalisation trends. The diagrams below depict the major topics indicated as salient issues for the EU and the relative strength of feeling about these issues.

For respondents well-acquainted with the EU, a key challenge in the relationship is Australia’s lack of awareness about the EU. Respondents less involved with the EU showed concern about its protectionist policies, management of refugee movement and other internal problems.

There is widespread agreement across sectors that great opportunities for Australia-EU collaboration lie in the areas of research, technology and education. Other areas for mutual benefit include defence and security cooperation, and working together in third countries. 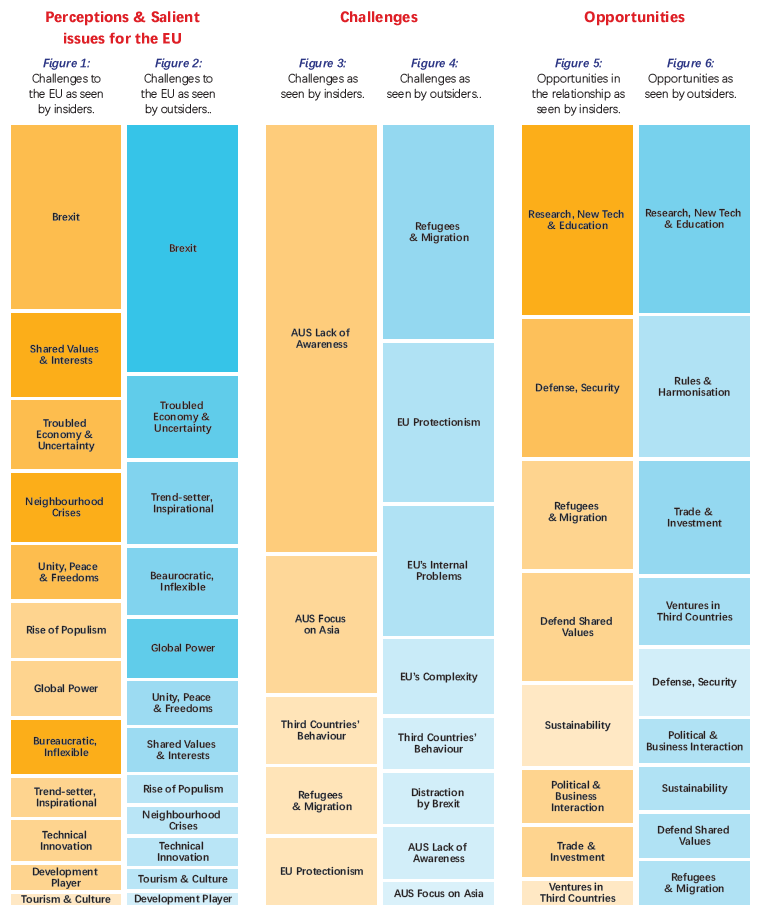 Even though Brexit is undoubtedly a new phenomenon, the fact that it features so prominently in the discussion reflects the long-standing role of the UK as primary entry point to Europe for Australia. This historical centrality of the UK in EU-Australia relations partly explains the current concerns about ‘the future of the EU’. Indeed the ‘uncertainty’, as noted above, is not only for the EU itself, but rather about how Australia can relate without a UK gateway. ‘Insider’ respondents backed this up somewhat, suggesting that the EU is portrayed rather negatively in the Australian media, not least through reports from the UK.

Another historical point is the Australian complaint about agricultural subsidies, still considered by some as the most visible part of European protectionism. This issue is still salient and not forgotten by those involved in business or politics, though perhaps without the priority it once had. This reflects a long-observed trend to move away from these areas where EU and Australian interests and ideologies are at an impasse.

Our research confirms that the EU remains a normative power and a moral leader for some, particularly in the environmental arena, but this does not necessarily extend to other fields or to a wider range of respondents.

We also confirmed previous findings relating to the importance of individual member states before a discussion of the EU as a collective, which is tied up with the perceived complexity and difficulty to understand its processes. The preference for bilateral ties is not only limited to the UK. We also found that Eastern European countries were largely overlooked in the discussion. The EU enlargements since 2004 are mentioned as important in academic literature, but their relevance to Australian elites seems limited.

Whereas the EU was seen as an economic power prior to the financial crisis, the uncertainty and difficulties in the economy of the region since then have affected how it is viewed. The migration and refugee crises present another difficulty, even to those participants that were not dealing with them as part of their direct work.

In terms of common interests and values, the almost automatic mentioning of a shared cultural and political heritage is now accompanied by exhortations to face up to the challenges posed by the rise of populism, anti-globalisation movements and the arrival of Donald Trump in the White House.

The work done clearly shows a perception that the EU is now facing significant internal issues in a more uncertain international arena. This suggests that it is a critical time to highlight the advantages to both parties of an amicable and productive relationship, and consider how it could be improved.

A first lesson of this study is that people-to-people contacts are important for creating genuine interest in greater collaboration.

The interviews suggest that the issues of Brexit and the perception of crisis, while overall a negative for the relationship, have at least stimulated greater discussion and interest in Europe among Australians, leading to greater curiosity. Some Australians believe there is also a growing interest in Australia in Europe.

A clear way to build on this growing interest is the fostering of people-to-people contacts. By bringing people with mutual interests together the EU-Australia Leadership Forum project can create genuine interest in greater collaboration. This should involve focusing on the areas of greatest potential identified in this study: collaborating for mutual benefit, sharing areas of excellence and working together on global issues, working together in third countries and standing side-by-side in defending the liberal global order.

If this study applies to the broader Australian landscape, it can be assumed that the EU-Australia free trade agreement discussion will not be unproblematic; while it is an area of opportunity it is also likely to raise concerns about the difference in policy positions between Australia and the EU.

Alfonso Martinez Arranz is a key expert on the project team and a lecturer at Monash University.

Caroline Karavoulias is a past researcher at the Australian Institute of International Affairs.

This article originally appeared in The EU and Australia: Shared Opportunities and Common Challenges, published on the occasion of the inaugural EU-Australia Senior and Emerging Leaders’ Forums in Sydney on 2­­–6 June 2017. The AIIA is part of the international consortium selected to deliver the EU-Australia Leadership Forum project, a three-year initiative funded by the EU.

Australia Must Halt all Military Exports to Saudi Arabia

By continuing to export arms to Saudi Arabia, Australia is complicit in the regime’s violations of human rights.

Australia’s Next War: We Need to Talk Now about War-Power Reform

Going to war is one of the most significant decisions that any country makes, so it’s time we discussed what will happen the next time Australia is faced with the question.

The Efficacy of Being Very Vocal: Australia and Human Rights in China

Canberra has been on the receiving end of criticism for not being more vocal when it comes to human rights in China. Yet it is not at all clear that more assertive approaches would be effective, and the steps it takes may continue to disappoint those on both sides of the spectrum.