As part of the Millenium Project, 15 Global Challenges have been established to provide a framework to assess the global and local prospects for humanity.

One of these urgent challenges involves population growth, and the globe’s capacity to establish how populations and resources can be brought into balance.

Viewed in terms of the broad sweep of human evolution we live in exceptional times. Before the industrial revolution began in northwest Europe just over two centuries ago and subsequently developed and spread to all the inhabited continents world population had never experienced such rapid, widespread and sustained demographic growth. This unprecedented growth in human numbers, combined in many places with rising living standards, has depended on, and in turn accelerated, a massive increase in the exploitation of natural resources.

The accumulated effects of all this are so large that they are now significantly reshaping our planet’s climate system, the chemistry of her oceans, and the balance and distribution of both plant and animal species. According to some prominent scientists, we now live in the Anthropocene, a new geological era and the first to be defined by human impact on the Earth’s physical systems. 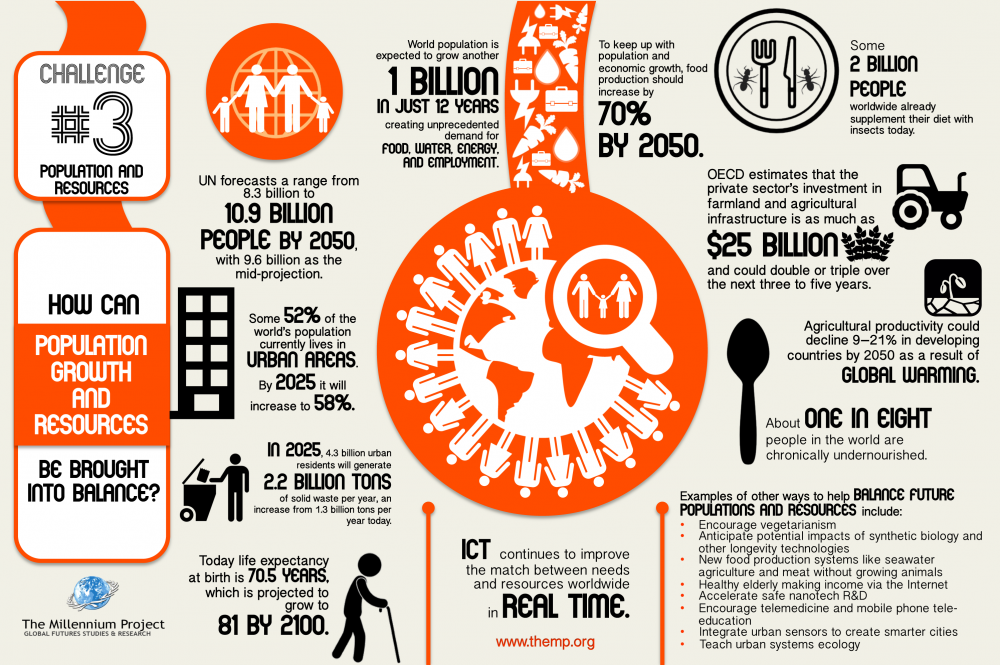 The challenge of managing population and resources

Scientists have adopted a variety of perspectives to examine the relationship between population and resources in closer detail. Writing during the earliest stages of industrialization Malthus believed the relationship contained a fundamental contradiction: while population has the potential to grow exponentially (due to what he called the “passion of the sexes”), the use of natural resources to serve human ends (for example, conversion of land to agriculture) could at most grow arithmetically.

The rapid expansion in the use of fossil fuels, however, and the vast range of industrial technologies this brought about, soon showed that in the modern era the exploitation of resources could grow exponentially too, at least for many decades (and perhaps even centuries). Although non-renewables are finite economists are quick to point out that technological innovation usually means substitutes can be found to ameliorate scarcity. Meanwhile environmental scientists point to the disastrous unintended consequences for ecological systems and human wellbeing of the way many resource are actually used, mainly because of the resulting pollution and the fact that even so-called renewables are being harvested unsustainably, sometimes to the point of extinction.

We have reached the stage where these issues need to be addressed in a holistic perspective. The benefits and costs of resource use are not distributed evenly within or across populations, and dealing with one environmental issue at a time in isolation often simply exacerbates others, frequently to the disadvantage of the poorest members of society. There is a growing body of evidence showing that we cannot balance population and resources unless development itself is made more socially inclusive. Economic growth, environmental sustainability, and social equity are interrelated, and are now widely recognised as the three principal dimensions of sustainable development (SD); population dynamics and good governance impact strategically on all three dimensions.

The infographic accompanying this commentary lists many things people can do to mitigate the current severe imbalance between population and resources – encouraging vegetarianism, anticipating the potential impacts of synthetic biology and other longevity technologies, and so on – but unless these actions are coordinated within a broad SD policy framework their respective impacts are unlikely to combine synergistically. Balancing population and resources is best viewed today as one important objective embedded within the broader goals of SD.

UN Secretary-General Ban Ki-moon describes sustainable development as the “central challenge of our times.” Earlier this year Jeffrey Sachs, special advisor to the Secretary-General and director of the Earth Institute at Columbia University, published an authoritative account of the scientific and normative aspects of SD, and of how all countries need to mobilize to reach its goals. Scientists, policymakers and other stakeholders around the world have been working hard for several years on a new development agenda, and world leaders are on schedule to adopt ten sustainable development goals (SDGs) later this year, to supersede the eight millennium development goals (MDGs). As Sachs puts it, “SDGs call for socially inclusive and environmentally sustainable economic growth.”

Balancing population and resources is not an explicit SDG per se but it is implicit in all ten. Proposed SDG 2, for example, is to “Achieve economic development within planetary boundaries”; SDG 9 is to “Secure ecosystem services and biodiversity and ensure good management of water and other natural resources.” Moreover when we think of population we should not think only of population size and growth; the changing composition of population is of vital importance too, for example, the distribution between urban and rural, the age structure of the population, and the human capital embodied in the population’s membership. Resource use (and its negative consequences as well as its benefits) depends on a population’s composition as well as its size.

While the MDGs focused on eradicating extreme poverty in developing countries the SDGs will apply to both developed and developing countries. (Poverty eradication remains a priority, however: SDG 1 reads, “End extreme poverty, including hunger.”) Australia, like other OECD countries, will be committing to pursuing its economic prosperity in ways fully consistent with social inclusion and environmental sustainability. Improving the balance between changes in the country’s population and her exploitation of natural resources will be an essential element in meeting those commitments.

Dr. Adrian Hayes is an Adjunct Associate Professor at the Australian Demographic and Social Research Institute at ANU. This article can be republished with attribution under a Creative Commons Licence.

Alexey Navalny’s return and subsequent imprisonment in Russia solidified his role as a leader of political opposition to Putin. The nationwide protests associated with calls to free Navalny exposed deep polarisation in the country, between societal groups pushing for and those opposed to political changes.

It is unlikely that the Ides of March will worry Boris Johnson the way it haunted his hero Julius Caesar. The opening of tense and tricky free trade talks between Britain and the European Union on the third day of the month does have a ring of menace.

With an unexpected and ultimately unsuccessful initiative on 8 January, the founder and charismatic leader of Italy’s 5-Star Movement, Beppe Grillo, launched a […]