Current counter-terrorism strategic communications efforts can take a much-needed morale boost from history. Long-term commitment to these efforts in support of both national security and broader foreign policy interests will be essential to foster the organisational stability and learning required to meet current and future challenges. There is still reason for optimism in the battle against extremist propaganda.

One of the most pressing national security issues facing many Western governments is how to improve counter-terrorism strategic communications. As ISIS defeats in the field continue to mount, especially in Iraq, its propaganda machine is likely to go into overdrive as it seeks to reframe its shrinking caliphate as something other than what it is: the latest in a series of failures rooted in deep flaws within its politico-military agenda. These dynamics will create opportunities for regional and Western governments to leverage successes in the field which are desperately needed in the information theatre. There is  little doubt that ISIS’s Islamist rivals—such as Jabhat Al-Nusra (JN) and al-Qaeda (AQ)—will be looking to attack it both militarily and with carefully crafted messaging. This propaganda war will intensify before it abates.

Given the problems that have dogged counter-terrorism strategic communications to date, it may seem counter-intuitive that history may contain the keys to defeating what often appear to be uniquely modern challenges. But the millennia’s long historical evolution of propaganda during war has been driven by three constant factors: advancements in communication technologies; developments in military strategies and technologies; and the changing relationship between political elites and the people. The persistence of these factors has resulted in recurring trends as state and non-state actors throughout history have grappled with the fundamental issue of how to ensure one’s message reaches a target audience to maximise the effects of one’s own actions while minimising that of adversaries. While the challenges may have become more complex with time, the fundamental nature of these challenges remains. In one of the authors’ research published by the International Centre for Counter-terrorism at The Hague there are some crucial lessons that can be drawn analysis of the last 100 years in the evolution of propaganda during conflict from the ancients to ISIS.

Throughout the 20th century, Western nations have a record of success when it comes to effectively using strategic communications during conflict. From World Wars I and II through the Cold War and comparatively smaller conflicts such as the first Gulf War and Australian efforts during Operation Stabilise (East Timor), current efforts can take heed from this history. Anti-ISIS messaging efforts may have been dogged by problems—whether it’s the dissemination of nonsensical tweets or leadership instability—but so too were almost all of the previously successful campaigns. Early British efforts against the Nazi propaganda were disastrous, epitomised by successive heads of the Ministry of Information leaving the post. Current efforts can take a much needed morale boost from this history. There is still reason for optimism in the battle against extremist propaganda.

Sadly, the slow starts that are somewhat of a trademark of Western efforts in the information theatre are largely products of a disturbing trend: after World War I and World War II, the Cold War strategic communications departments that were heralded for their efforts during the conflict were either dismantled or dissolved into other departments. For example, in the aftermath of the Cold War, the United States Information Agency (USIA), which had been established by President Eisenhower in 1953 and “charged with the conduct of US public diplomacy in support of US foreign policy”, was absorbed into the State Department in 1999. While the function of using multifaceted strategic communications as a means to engage with foreign audiences by no means disappeared, this decision was emblematic of a re-prioritisation of efforts in a post-Cold War world. When the 9/11 Commission Report stated that NSC staff warned that “we have by and large ceded the court of public opinion” to al-Qaeda, it reflected a growing sentiment amongst many that more and direct engagement was needed. Long-term commitment to strategic communications efforts in support of both national security and broader foreign policy interests will be essential to foster the organisational stability and learning required to meet current and future challenges.

While the current focus on combating extremist propaganda with effective messaging is undoubtedly necessary, counter-terrorism strategic communications must not be seen as a silver bullet solution to fight violent extremism. Even the most perfectly crafted messaging—whether targeting domestic or international audiences—is unlikely to resonate if it is not synchronised with real actions on the ground. Historical successes in the information theatre of conflicts have almost inevitably been partnered by politico-military actions in the field. The early successes of the Nazi propaganda machine were as much a product of their politico-military successes as the efficacy of their messaging. Equally, Allied successes in the field created opportunities in the information theatre that still required the design of effective messaging to be adequately exploited. This highlights another crucial lesson: actions do not speak louder than words and words without actions are meaningless. In the modern world of instantaneous communication in which audience perceptions are often shaped by actors as events are unfolding, messaging must be synchronised with action (and vice versa) or it risks creating precious opportunities for adversaries to fill the ensuing void.

So what does history tell us about message design? There is no simple solution. Instead a framework of interrelated components must be considered.  At a macro-level, effective messaging must be able to reach its audience, be relevant by being timely and resonate by leveraging deeper contextual and psychosocial factors. The strength of these 3R’s (reach, relevance and resonance) can, in turn, be further boosted by the strategic selection of the most appropriate communication medium (such as print, radio or social media) and format (from speeches or songs to written word or illustrations) for a message that is disseminated by a credible messenger. 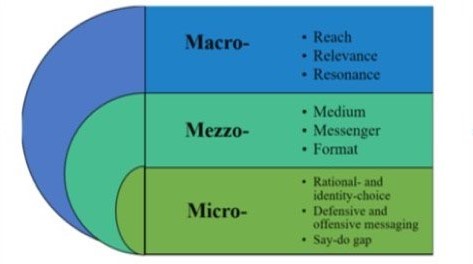 Next are the micro-level considerations where there are a range of design considerations from fusing rational- and identity-choice messaging to manipulating perceived say-do gaps; the dissemination of both defensive and offensive messaging is particularly pertinent to counter-terrorism strategic communications efforts. The emphasis on developing effective counter-narratives against extremist propaganda is understandable and undoubtedly important. However, counter-narratives are inherently defensive messages that should constitute only part of an overall communications strategy. The former deputy director of the Office of War Information during World War II, Wallace Carroll, argued in Persuade or Perish in 1948 that Allied prioritisation of offensive messaging designed to provoke defensive counter-messaging was crucial to defeating the Nazi propaganda machine. Counter-terrorism strategic communications architects will need to design and disseminate defensive messaging but a prioritisation of offensive messaging could prove decisive in changing the fortunes of current efforts.

Finally, history suggests that the following strategic-policy principles are essential to optimising a strategic communications campaign: (1) deploy a diversity of messaging designed to cater to a spectrum of target audience motivations; (2) establish a simple overarching narrative to cohere the campaign; (3) use a range of communication tools, not just the latest, to maximise a message’s reach, timeliness and targeting; and (4) synchronise messaging with strategic-policy/politico-military actions to maximise the effects of both.

ISIS’s defeats in the field are providing much-needed opportunities for Western governments and their allies to strike ISIS in the information theatre. Drawing on these lessons from history could prove decisive in shifting the momentum of the propaganda war back in our favor.

Haroro J. Ingram is the winner of the AIIA’s Research Impact Award for 2016. He is a research fellow with the Australian National University and a research associate with the International Centre for Counter-terrorism – The Hague (ICCT). Ingram is the author of the ICCT’s A brief history of propaganda during conflict: Lessons for counter-terrorism strategic communications and co-author of the ICCT’s Lessons from history for counter-terrorism strategic communications. Ingram is also a visiting researcher with the Naval Postgraduate School’s Defense Analysis Department.

Dr Alastair Reed is acting director of the International Centre for Counter-terrorism – The Hague (ICCT). Reed is the project head of ICCT’s Counter-terrorism Strategic Communications Project and co-author of Lessons from history for counterterrorism strategic communications. Reed can be followed on Twitter @reed_alastair. This article is published under a Creative Commons Licence and may be republished with attribution.

C20: A Focus on Inequality

As the gulf between the world’s privileged and poor widens, Tim Costello, Chair of the C20 Steering Committee, calls for not only greater […]

Democracy was deemed unlikely for India as the country’s grinding poverty and the diversity of its ethnic, religious, caste and linguistic identities were […]