Australia has a vital interest in preventing its region, defined as the Indo-Pacific in the 2013 Defence White Paper, from becoming an arena of great power rivalry. This includes between India and China. Developing a close strategic partnership with India is an important part of this strategy. However, there’s a fundamental disconnect between Australian and Indian perceptions of the Indo-Pacific. While Australia is keen to avoid being part of any formulation that appears to contain China, mainstream thinking in India opposes the inclusion of China and is increasingly anxious about its visibility in the Indian Ocean region. Australia finds itself stuck in a cleft stick in managing China’s and India’s different views of the Indo-Pacific.

Australia is unlikely to push a concept that’s seen as excluding China. The danger, as argued by Andrew Phillips and Nick Bisley, is that ‘[v]iewed from Beijing, the idea of the Indo-Pacific… appears to be to keep the United States in, lift India up and keep China out.’ However according to Rory Medcalf, ‘[w]hile the new name of the region may suit India, the quintessential Indo-Pacific power will be China, and the indispensible one will remain the United States…far from excluding China, Indo-Pacific Asia includes it by definition.’ At least at the official level, idea of the Indo-Pacific is being promoted as an inclusive concept, in line with Australia’s foreign policy goals of a strong alliance with the US, a strong economic relationship with China, and its overriding aim of preventing instability. 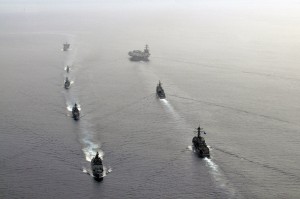 Looking then at India, while there’s no one Indian view on the Indo-Pacific, it’s possible to identify some mainstream views. In a helpful description, Priya Chacko  characterises Indian views on the Indo-Pacific as falling into three camps: one that rejects the term entirely (as aligning India too closely with US interests) and argues for continuing India’s non-aligned approach; one that uses an exclusive definition and sees this as a way to balance China’s growing power and threat; and another that has a more inclusive approach.

There has been an unmistakeable embrace of the Indo-Pacific concept by India, including by Prime Minister Manmohan Singh: ‘our future is inter-linked and a stable, secure and prosperous Indo-Pacific region is crucial for our own progress and prosperity.’ In 2009, before Australia’s shift to the term, a former Indian naval chief stated that ‘India’s first pre-condition (not merely based on semantics) should be to insist on having the ‘Asia-Pacific’ label replaced by the term ‘Indo-Pacific’ which has a far more geographically inclusive connotation.’ In other words, far from being hesitant about using the Indo-Pacific terminology, some in India view it as necessary and a matter of prestige and recognition.

While the issue isn’t yet settled, common threads of the Indian vision include retaining primacy in the Indian Ocean region and concern about China’s growing presence in the region. China’s build-up of ports and refuelling stations around India in Pakistan (Gwadar), Sri Lanka (Hambantota), Bangladesh (Chittagong) and Myanmar (Sittwe and Kyaukpyu) have created deep anxiety within Indian strategic circles. The ‘string of pearls’ is a thesis which is widely believed and used as a reference point in India for any strategic discussion on the region. The fear of Chinese encroachment is palpable in the Indian naval establishment, with the Indian Maritime Doctrine of 2004 and the Maritime Strategy released in 2007 making cogent references to Chinese attempts to gain a ‘strategic toe-hold in the Indian Ocean’ and to ‘encircle India’. According to one commentator, the ‘string of pearls’ expression ‘has come to embody, occasionally more metaphorically than factually, India’s innate, almost visceral fear of maritime encirclement.’

If this is the case, Australia’s Indo-Pacific policy is in a cleft stick: Australia’s inclusive approach—which is good for Australia–China relations—isn’t in line with mainstream Indian views. Australia generally agrees that China has legitimate interests in the Indian Ocean, given the flow of trade to China through the ocean, and needs to be included in any evolving security architecture for the region. The danger is that this mightn’t be in line with Indian views.

Admittedly the situation remains fluid. There’s still much robust debate on the Indo-Pacific concept in India and it’s not clear how long-lived Australia’s embrace of the Indo-Pacific term will be and what approach the Abbott Government will take in future. For example, Minister for Foreign Affairs Julie Bishop prefers the formulation ‘Indian Ocean Asia-Pacific’ to the ‘Indo-Pacific.’

However given Australia’s strong interests in the region, whatever the definition, it’s likely to remain involved in these controversies. Australia is likely to keep proposing an inclusive idea of the region but at the same time responding negatively to any developments which it sees as inflaming tensions or creating instability. Australia will continue to be hostage to how the rivalries in the region play out.

For a Few Kilometres More: The Fight For Northern Syria

Europe Observed: Brexit on the Back Burner

It has been a busy few weeks in UK politics and there have been some interesting developments that (finally) aren't all about Brexit.

With the Sino-Russian relationship ostensibly at its best time in history, it is by no means a relationship between equals.