The Greek government is extremely outspoken and keeps moving at a turtle’s pace in terms of the structural reforms that are a requirement of renewed bailout funds. This only brings the likelihood of a Grexit closer.

As the current standoff between Greece and its international creditors reaches a climax, the prospects that the country will default on its debts and possibly leave from the eurozone draw closer. This has taken many by surprise, as default and Grexit has never been the desire of either side in negotiations.

In many ways the Greece’s Syriza government is behaving like a modern version of the ancient Greek philosopher Diogenes the Cynic – not least because the recent image of Yanis Varoufakis (the unconventional finance minister) resting on the floor of the Greek parliament resembles that of Diogenes resting on the steps of the Agora of Athens in Raphael’s famous “School of Athens” fresco. 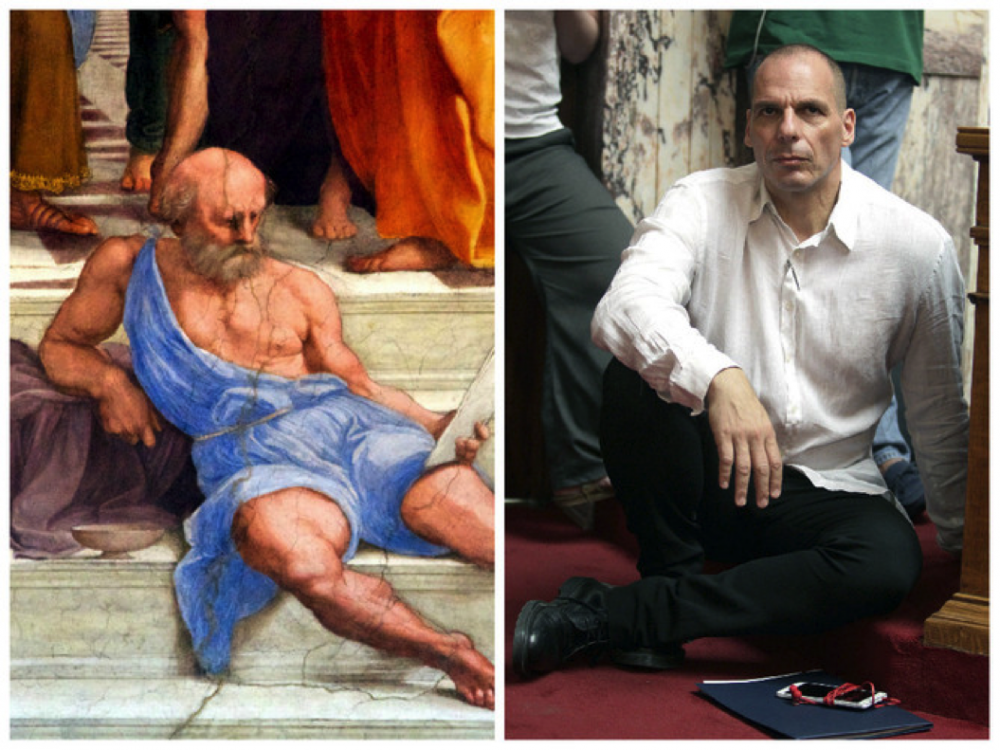 Diogenes, like Varoufakis and his party, was a “controversial” figure. He used to criticise the social values and institutions of what he believed to be either a corrupt or a confused (economic) society. When Alexander the Great visited Diogenes and asked him if there was any favour he might do for him, Diogenes famously and fearlessly replied: “Yes, stand out of my sunlight.”

This reflects a major problem with current Greek policymakers. They haven’t quite understood that denial of economic reality brings Greek default a step closer, in which case, there will be very little (if any) sunlight left for them to enjoy.

The need for reform

Although the Greek government is extremely outspoken, it keeps moving at a turtle’s pace in terms of the structural reforms that are a requirement of renewed bailout funds. If anything, Syriza has been very keen to reverse recent structural reforms. This can be seen in Greek universities where they have drafted new legislation that will (once again) give undergraduate students the right to take as many years as they want to complete their first degree.

Greece’s need for structural reform is captured by the World Bank’s government effectiveness index. The index, which captures perceptions of the quality of the civil service and the degree of its independence from political pressures, reveals the extent of the problem. Among 215 countries, the index currently ranks Greece at the disappointing 66.9th percentile. Both Portugal and Spain, the eurozone’s other peripheral countries who have gone through similar financial experiences to Greece, are ranked above the 83rd percentile.

Similarly, the World Bank’s control of corruption index, which captures perceptions of the extent to which public power is exercised for private gain, does not rank Greece highly. The index includes both petty and grand forms of corruption, as well as “capture” of the state by elites and private interests. Greece is ranked at the even more disappointing 55.2th percentile. Both Portugal and Spain are ranked above the 75th.

A similar picture emerges when we look at the World Bank’s regulatory quality index which captures perceptions of the ability of the government to formulate and implement sound policies and regulations that permit and promote private sector development. The index currently ranks Greece at the 72.7th percentile. Both Portugal and Spain remain above the 75.6th percentile.

With Greece well below its peers in terms of its quality of governance, the Syriza government really needs to start making concrete commitments. For instance, they could accept the latest rescue plan, while getting the consent of the creditors on an ambitious type of restructuring of Greek debt (currently above 175% of the country’s GDP).

What I have in mind is rather straightforward. This restructuring could take the following format: if Greece records positive GDP growth but fails to improve based on the government effectiveness index, then the cost of servicing the Greek debt should be higher compared with the case where Greece records both positive growth and an improvement in the index. This mandate plan will provide a strong signal that Greece means business and therefore address some of the major concerns of its lenders.

Clearly, there is a risk that the current standoff will escalate further. As Greece is currently running out of cash, a default is imminent if another tranche of bailout funds is not released. At present, it is not clear whether a default will lead to an automatic Grexit.

Should this unfortunate scenario emerge, Greece should consider adopting a new version of the old drachma currency. Indeed, given that they have been moving at a turtle’s pace in terms of adopting and implementing structural reforms, the new drachma could feature the famous turtle coins from the pre-numismatic age that were popular in ancient Aegina. Doing so will serve as a constant reminder of the consequences of being so slow at implementing the necessary structural reforms to bring their economy back to a sustainable path.

Costas Milas is the Professor of Finance at University of Liverpool. This article was originally published in The Conversation on June 18, 2015. It is republished with permission.

Justin Trudeau and the SNC Lavalin Scandal in Canada

Canadian Prime Minister Justin Trudeau is caught in a corruption scandal that could derail his Liberal party’s electoral fortunes.

As the mid-terms change the make-up of US Congress, how do Australia and New Zealand protect and advance their interests by engaging with the US legislature?