Since the 1990s, South Ossetia has sporadically erupted into multiple deadly conflicts. Three people affected by these conflicts recount their experiences.

South Ossetia lies at the foot of the southern slopes of the Caucasus Mountains, where Europe meets Asia. The Caucasus are where, for thousands of years, species, people, languages and religions have collided over and over again. As one of the borders between Asia and Europe, it is a natural frontier. South Ossetia is a tiny territory, measuring nearly 4000 square kilometers, a bit bigger than Adelaide. South Ossetia declared independence from Georgia in 1991. The sporadic escalation of the crisis led to two armed conflicts, one in the 90s and another in 2008, with occasional periods of tension throughout. These outbreaks of violence disrupted lives, separating families and friends. Despite its recognition by Russia, Venezuela, Nicaragua, Nauru and Syria, most UN members consider this territory to be part of Georgia. The International Committee of the Red Cross (ICRC) has been here since 1992, acting as a neutral intermediary. It works to clarify the fate of people missing from the conflict, supporting vulnerable groups and visiting detainees. 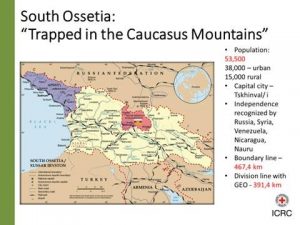 One may need a good reason to reach South Ossetia, and it can take a while. Approaching it in October last year, I could see the solid granite mountain tops already covered by snow. Driving further south, you face a growing mountain wall, that later becomes a world of Autumn colours – yellow, orange, and green – that, combined with the fresh air of the mountains, is rather like experiencing a fantastic example of National Geographic 4D reportage.

Half-hidden in the hills you start seeing the Massygs or Vainakhs, tower-like stone constructions common to the Caucasian region, which have served as dwellings or military fortresses for the past two thousand years. Almost without noticing, we entered Tskhinval/-i,* South Ossetia’s main city.

When I arrived, I saw a clean city, planned in a grid with high pines everywhere and mountains ever-present. The first thing you notice is the absence of traffic; there is a slow pace to things in general. I felt like time had stopped.

South Ossetia is also the place where the stories of the following three individuals unfold:

Sarka** lived with her husband and two young sons in South Ossetia, when the 1991-92 conflict caught them by surprise. Her husband died unexpectedly and, during the harsh economic years following the fall of the Soviet Union, Sarka was unable to afford a permanent residence. She and her children were forced to wander, switching rented rooms 12 times until someone noticed their harsh situation and provided accommodation in exchange for help with the bills.

The family suffered more heartbreak in 2007. Sarka’s younger son was killed by a stray bullet during the tensions that led to the armed conflict of 2008.

“One day, when the war broke out again, my – then only remaining – son and I were hiding in the basement hoping the shelling would soon stop,” she says. “A missile hit the house closest to us. We rushed among many others to help extinguish the fire, under the continued shelling. Our house was also badly damaged.”

Such situations were common to many people during the periods of armed confrontation the region has gone through. Soon after, following a short and aggressive illness, Sarka’s remaining son died in 2009.

Sarka speaks as if her memories belonged to someone else. I guess it is the only way she can bear speaking about burying her only two sons, alone at 78 and in a world scarred and shaped by war. Sarka rarely goes out, and the ICRC staff who provide her regularly with food are among the few people she ever sees.

“You found me in the worst times and you keep supporting me with whatever you can. To me, you are like a light in the darkness,” Sarka tells us. 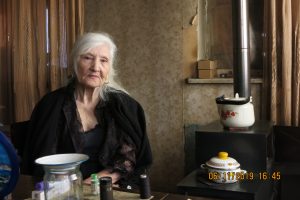 The conflict resulted in hundreds of thousands of people having to leave their homes, separating friends and families. It is in Georgia’s capital, Tbilisi, that Bakur worked for many years in a beer brewing factory.

“In the old times, before the war, many different communities coexisted in peace,” Bakur says. “Neighbours were the closest of friends and relatives. I used to live in a very typical Tbilisi yard where neighbours were a big family, sharing joy and grief.”

Traveling back and forth between Tskhinval/-i and Tbilisi used to be much easier, until the 2008 conflict.

“Sometime after the war broke out in 2008, I learnt that my dad was seriously sick,” says Iamze, Bakur’s daughter.

“He underwent surgery. It was the neighbours who looked after him all throughout. There was no way that I could possibly take care of him, I simply could not go to Tbilisi.”

By that time, Iamze had married and moved to Tskhinval/-i in South Ossetia, where she gave birth to a daughter, Victoria, in 2015.

The ICRC helped Bakur to be reunited with his daughter Iamze and her family in South Ossetia in 2018, after ten years of separation. It was the first time he had met his granddaughter. But it meant Bakur had to choose between his family and his life-long friends in Tbilisi.

“Victoria’s curiosity and energy challenged me as her grandpa. I want to share with her the best things I know, something from me that she can remember for her lifetime,” Bakur says. “Children deserve care and love. Adults should protect them from war and evil.”

Iamze named their daughter Victoria to signify their family’s victory over the hardships they had lived through. Bakur now has his family. Others are not so lucky.

Liana was in her early 60s when the August 2008 conflict started. Her children and grandchildren decided to flee their native village in Znaur/-i district, while Liana decided to stay. She survived thanks to her small farm, but due to age and health issues, she decided to be reunited with her family in Tbilisi in 2019.

“My son has a disability and is in a wheelchair. I did not want to become an additional burden for him. This is what made me decide not to join them in Tbilisi. But my daughter promised to support me and, I made this decision – not an easy one for me – to leave behind my house and the garden I had dedicated my entire life to. This is my biggest regret.”

With assistance from the ICRC, Liana was finally reunited with her children and grandchildren after more than a decade of separation. 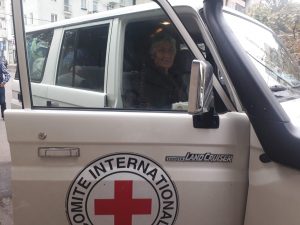 The ICRC has been working in South Ossetia since late 1991, providing medical supplies, food and water, hygienic items and wood to people in need, visiting people detained in relation to the conflict and facilitating the transfer of sick people to hospitals across administrative lines. The level of ICRC assistance has varied over the years, but today the ICRC continues to help those most in need, reuniting families separated by the conflict and helping resolves cases of people missing due to the fighting.

As tensions persist, the ICRC is the only humanitarian organisation present in South Ossetia. It works among the 53,000 inhabitants to fulfill its neutral and impartial mandate – to help those affected by armed conflict.

* The ICRC uses both the Georgian and South Ossetian spelling of place names to ensure its neutrality.

With additional words from Nona Chikhladze in Georgia and Marina Tedeti in South Ossetia.

Marco Jimenez is an ICRC spokesperson.

This article is part of the Forgotten Conflicts series by the International Committee of the Red Cross, highlighting the overlooked humanitarian consequences of armed violence around the world.

Walking the Tightrope to Avoid a Forgotten Crisis in Bangladesh

The devastation that plagues the Rakhine state of Myanmar persists, due to the inability to reach a consensus on how to effectively deal with the displacement of refugees.

Lebanese Political Elites and the Syrian Conflict: A Mutual Damage

The relationship between Syria and Lebanon can be best described as problematic friendship. With Lebanon’s deeply fragmented national consensus and sectarian divisions, it was inevitable the Syrian conflict would spill over to Lebanon more than other neighbouring countries.

Forgotten Conflicts 2021: On Resilience, After Seven Years of Conflict in Ukraine

By Sanela Bajrambasic and Oleksandr Vlasenko

For years now, life in the Donbas has remained split along a “contact line” of conflict since fighting broke out in 2014. The International Committee of the Red Cross is working with those hit hardest by the fighting.