In late 2016, the Colombian government and the Revolutionary Armed Forces of Colombia, or FARC, signed a peace agreement to put an end to Latin America’s longest-running armed conflict. The humanitarian impact will be immediate, but the economic effects of such conflicts can linger for generations.

While peace accords are only the first step toward ending ongoing conflict, Colombia is indubitably on the path to peace after more than half a century of devastating civil war. As the country approaches post-conflict status, it is important to explore how much the violence has cost the Colombians in economic terms.

The fact that violent conflict costs the world much more than the obviously devastating human suffering is often overlooked. However, the lives and infrastructure that are affected also have a monetary value; and these losses can have an equally debilitating effect on a society and a nation’s economy. Colombia, with its unique history of conflict, presents an interesting case study for looking at how violence and conflict affect a nation and its economy.

Ranking seventh out of the 163 countries scored for their economic impact of violence and conflict by percentage of GDP, in 2015 Colombia spent US$139,481 million (AU$184,184 million) purchasing power parity (PPP) or US$2,919 million PPP per capita on violence and conflict. That is 30.1 per cent of its GDP. This staggering figure represents a huge hole in the country’s economy. Peace in Colombia will undoubtedly create a substantial social and economic dividend. 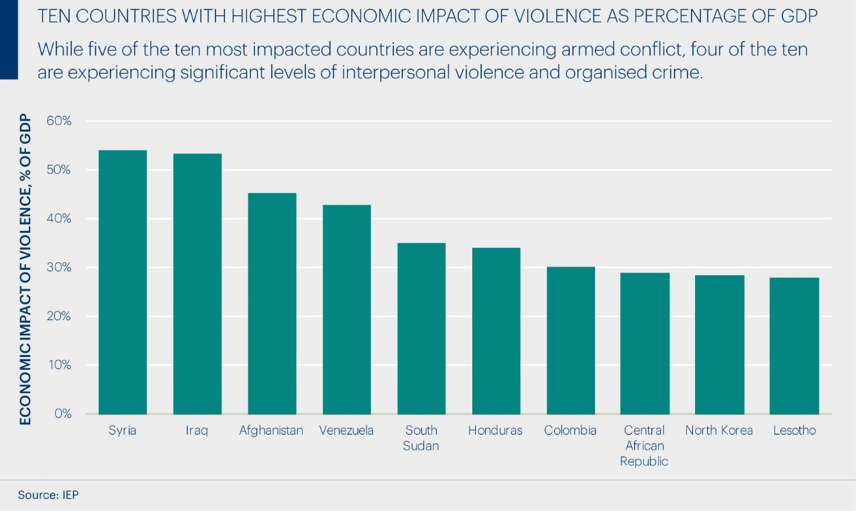 Violence is mutating and spreading throughout the world at an increasing rate. The 2016 Global Terrorism Index highlighted the continued increase in the impact of terrorism with 23 countries recording their highest number of deaths on record, up from the previous high of 17 countries in 2014. However, terrorism still only accounts for a small percentage of the total number of violent deaths and crimes. In 2015, there were just over 29,000 reported deaths from terrorist activity globally, while nearly 500,000 deaths are attributed to homicides each year. These figures, while stark, are rarely considered for their economic implications.

What might the economic value of peace really be, and how might improvements in peace sustain economies, allowing for investment in more productive policies?

The Economic Value of Peace report produced by the Institute of Economics and Peace (IEP) suggests that the economic activity related to violence—both its prevention and containment, if considered as a single industry—would be one of the largest in the world. Conservatively estimated at US$13.3 trillion, this figure presents a strong argument for exploring how and why nations should improve their levels of peacefulness. 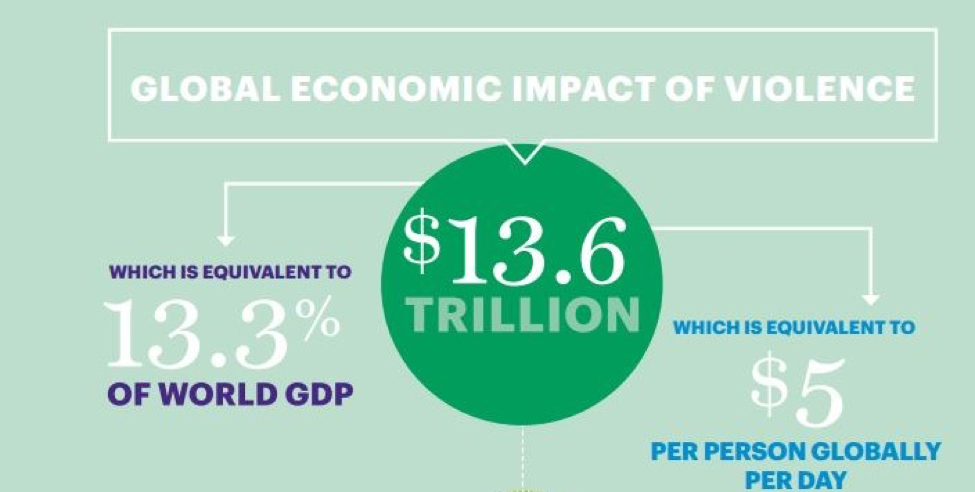 IEP arrived at this figure after a complex accounting exercise that included 16 separate categories of violence and conflict. The selection of the 16 categories is based on the definition of activities related to “containing, preventing and dealing with the consequences of violence”.

The research finds that the major contributor to global violence containment costs is military expenditure. Reaching US$6.16 trillion in 2015, military expenditure accounts for 45 per cent of the total cost of violence, decreasing by 1 per cent from the previous year. Internal security expenditure is the second largest category, which encompasses mostly containment and preventative expenditures involving spending on police, judicial and prison systems among other factors. It was over US$3.5 trillion dollars in 2015, which is approximately 26 per cent of global violence costs. Homicide, at 13 per cent, is the third largest category. The economic impact of homicide in 2015 was approximately US$1.79 trillion, dropping 7 per cent on the previous year. This decrease was due to improvements in advanced economies.

Through its research agenda the IEP aims to inform governments and policymakers of the violence expenditures that have the greatest effect on economic performance, with the hope that by identifying the right violence containment strategies they may be able of lower the economic costs of violence and encourage greater peacefulness through balanced investments.

Putting an end to the longest conflict in the Western hemisphere may well prove to be complex. Yet, peace dividends may soon demonstrate the economic worth of laying down arms.

Camilla Schippa is director of the Institute for Economics and Peace. Her expertise lies in the topics of peace, war and global rankings.

2021 in Review: The Centennial of the Chinese Communist Party: What is There to Celebrate?

China has changed tremendously since 1949, when the CCP took power. CCP leaders have plenty of reasons to celebrate the centennial of the organisation under whose stewardship China has become the largest economy in the world.

Dispatches on Diplomacy – Ruminations on Reporting and Prediction

While reports from diplomats comprise an important basis for policy formulation, it is wise to consider who reads […]

The theme for International Women’s Day 2019 in Australia is “more powerful together.” This is about how achieving a better world with equal rights and sustainable development requires everyone to work collaboratively.