Australia, China, and Indonesia have created different regulatory regimes to deal with their fintech landscapes. Each offers lessons in terms of privacy, data security, innovation and early lessons for inclusivity.

The rapid growth of the fintech industry commonly referred to as “internet finance” poses a number of challenges to financial regulators in the Asia Pacific. Governments have created different regulatory regimes to deal with their fintech landscapes. Australia, Indonesia and China each offer lessons in terms of privacy, data security, innovation and inclusive banking. By tracking the differences in both innovations and regulatory approaches in fintech in both Australia and China, we can better understand the prominent role fintech can play in closing the gap, taking note of the risks associated with malpractice and whether there needs to be a change in course for regulatory approaches to fintech.

Recently, I had the pleasure of moderating a panel discussion at the University of Sydney titled “Fintech, Consumer Right, and Cross-Border Regulations in China and Australia” organised by the China Studies Centre and the Centre for Asian and Pacific Law at the Sydney Law School. One of the things I found most interesting about the panel was our agreement about some of the early lessons we had formulated in our analysis of fintech innovation as follows:

Lesson 1: Fintech can help “close the gap” through its ease in being mobilized for social inclusion

As has been well documented by The Centre for Alternative Finance, fintech has handed power back to consumers by enabling them to both access and use a variety of services to improve their investments and quality of life. It is estimated that globally, over 2 billion people, about 40 per cent of the world’s adult population are excluded from conventional banking services (World Bank Digital Financial Services in IFC). For this reason, innovation in fintech allows for a redefinition of conventional banking power paradigms through its innovative and cost-efficient benefits.

Indonesia provides one of the greatest examples globally of how fintech branchless banking is undoubtedly an opportunity to support the unbanked and underbanked due to its ease of use and low set-up costs. A 2019 report titled Developing Mobile Banking Technologies in Indonesia reports that out of a population of 252 million, more than 28 million Indonesians still live below the poverty line and 49 percent of adults do not have access to conventional banking. These “unbanked” or “underbanked” citizens face a number of problems. Without access to ATMs, locals are often unable to carry out even the simplest activities. The problem is compounded where remote islands or villages are also without internet access.

Three islands in the Thousand Islands (Pulau Pramuka, Pulau Tidung and Untung Jawa) were studied in order to understand how fintech could assist locals to bank without branches. An article I wrote in the Australian Banking and Finance Law Bulletin in 2015 sets out the key findings of the study.  One of the key findings was that while financial access is virtually absent, mobile phone use on the three islands is notably high, with unique mobile connections (registered SIMs) at over 100 percent.

Lesson 2: Innovation in fintech, including in its regulation is essential

China is one of the global leaders in terms of its fostering innovation in fintech. China’s traditionally restrictive approach to economic policy has certainly been relaxed in recent times and this is definitely the case with fintech. Research firm Kapronasia estimates that fintech firms in China will take more than US $60 billion away from conventional banks via the use of e-payment platforms. For instance, the China approach is to regulate and innovate at the same time, and the three stages of fintech regulatory evolution have meant that fintech companies have enjoyed a long honeymoon which has also included access to resources and incubators for further development. This is perhaps the key difference from other countries’ fintech industries. It also provides multiple lessons for other countries in terms of how delayed implementation has allowed a tech-savvy climate for fintech to thrive in China.

Professor Duoqi Xu from Fudan University Law School, China has highlighted the persistence and focus of the China approach to fostering innovation at the aforementioned panel discussion. Professor Xu noted three key stages in regulation of fintech in China:

The win we are seeing now in China is that modern finance is meeting its match in regulatory response through the involvement of regulators in a climate which is much more tech friendly than other jurisdictions in the Asia-Pacific. Currently, three regulators shoulder responsibility for fintech in China. Primary responsibility is vested in the People’s Bank of China who introduces monetary policies. Micro-prudential regulation is shouldered equally by the China Securities Regulatory Commission (CSRC) as well as the Chinese Biodiversity Information System Center (CBISC).

It is worth noting that the Chinese approach to fintech has had several decades of unregulated innovation. This is perhaps a key difference between China and other regimes. Whilst this has resulted in cases of fraud and regulatory investigations, the resulting regulatory ecosystem in China is unique since it provides a commercially innovative and well developed fintech ecosystem.  In particular, it is worth noting that the resulting incubators have allowed for partnerships to be formed between businesses in China and local and international stakeholders, all with guidance and support from ministries. In Guangdong, for instance, a Blockchain and Financial Technology Incubation Centre was established in 2018 housing twenty-eight fintech companies in residence. Similar blockchain incubators around China have allowed for “closed loop ecological incubation models” which foster greater innovation and support for the fintech ecosystem. Additionally, China is one of the few economies to create a government backed digital currency. The IMF has recently encouraged countries to issue their own digital currencies via their central banks as a way to stabilise developments in fintech. These developments highlight the importance of upgrading FTAs between Australia and China.

Lesson 3: Fintech Should Be Founded on Rights-based Principles

The Bali Fintech Agenda is a shining light in balancing a principles-based approach to regulation against the freedom to innovate in Fintech. It also highlights the key lesson that rights-based principles should take priority over prescriptive rules when it comes to fintech. Principles-based regulation has been described in the US Federal Trade Commission as ”a different way of achieving the same regulatory outcomes as rules-based regulation in a more flexible and efficient manner.” 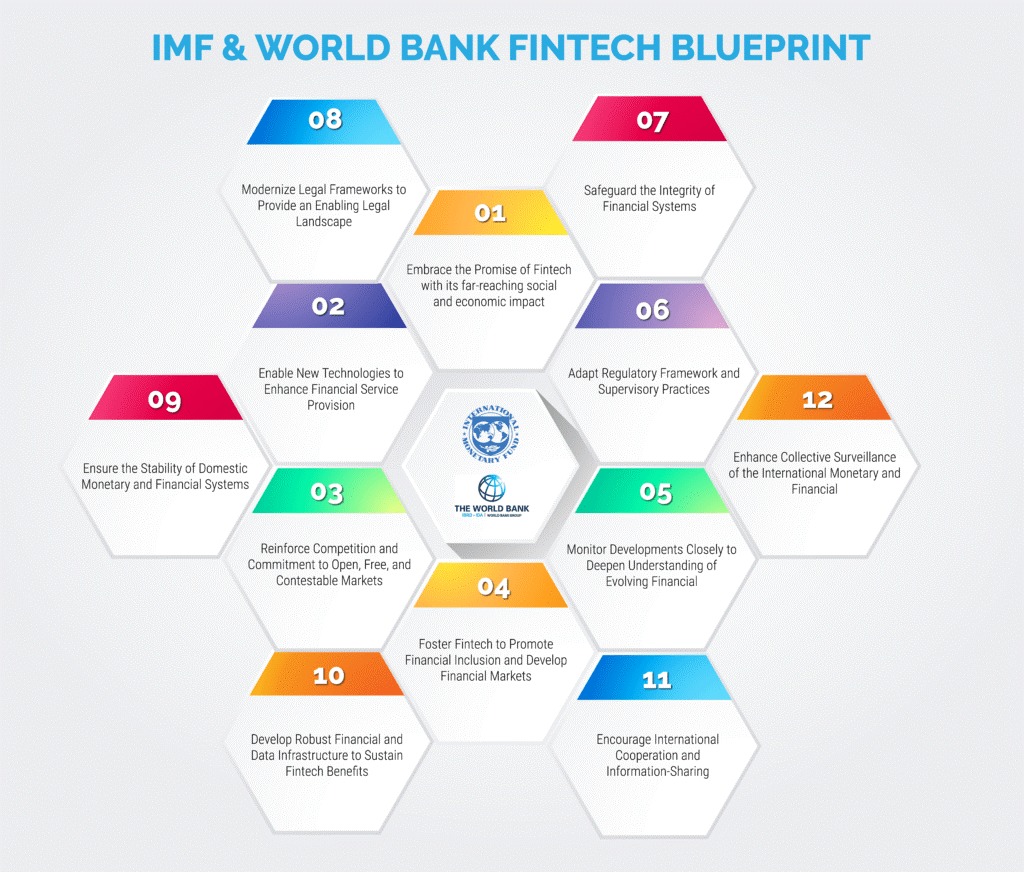 “Fintech can have a major social and economic impact …[on the unbanked]…All countries are trying to reap these benefits, while also mitigating the risks. We need greater international cooperation to achieve that, and to make sure the fintech revolution benefits the many and not just the few.”

According to alternative finance supervisors such as the Centre for Alternative Finance, the three most significant risks in fintech are Fraud, Capital Loss and Money Laundering. As a result, more innovative regulatory frameworks are being adopted in order to balance the risks against the need for innovation.

Australia provides a good case study of a compromise between innovation and regulation and drives home the importance of adopting a principles-based approach to fintech regulation. ASIC has provided both an innovation hub as well as a regulatory sandbox for introduction of fintech products. In addition, this is backed by the recent Consumer Data Right (CDR) which is being introduced in a phased approach from July 2019. The CDR is a good example of banking regulation which provides enablement of data portability across service providers to enhance e-services for consumers across all sectors.

The CDR will provide individuals and businesses with a right to access specified data held by them and to authorise access to this data by accredited data recipients (including other companies who offer fintech products and services). The centrality of protection of personal information as a rights-based approach to service provision with co regulation between the OAIC and the ACCC is complimentary to the Bali Fintech Agenda and provides a good case study for how other countries could enhance fintech by paying greater respect to individual rights.

While fintech in Australia is aimed at enhancing rights, access points and portability for existing customers via the Consumer Data Right, the uniqueness of the Indonesia and China approaches to fintech lie in their innovation. Indonesia’s e-payment reforms were enhanced on the back of the Thousand Islands field trip and demonstrate fintech’s ability to initiate and support direct access to banking for members of dispersed and remote communities. China’s three-phased approach to regulation of fintech has allowed a “long honeymoon” for fintech, to ensure that regulators do not pounce too soon and stifle any climate for innovation. This has facilitated incubators, innovation hubs, and one of the first global economies to have a digital currency. The Australia approach demonstrates a climate which is complimentary to the most updated authority on fintech: The Bali Fintech Agenda, by ensuring the centrality of a rights-based approach to the principles underpinning fintech. These different and diverse approaches to fintech implementation and regulation provide early lessons and allow us to appreciate the fundamental enhancement that fintech provides to sustainable development: it must continue to be mobilised as a tool for social inclusion.

David Marcus is the Head of Privacy Asia Pacific for a Fortune 500 NYSE listed company and specialises in data security, privacy and international policy. David is a qualified lawyer and has worked as an advisor to the United Nations, governments, Fortune 500 and ASX listed companies and banks and unlisted entities. David has a Master of Laws, and combined Commerce and Law (Hons) degrees from the University of Sydney.

The views in this article are those of the author alone and do not constitute the views of any organisation.

The ANZUS Treaty at an Uncertain Time: Should We Rely On It?

The ANZUS Treaty, now 70 years old, is relevant to how the United States and Australia position themselves to face coming critical global issues and a changed regional strategic situation.  But it has a somewhat old-fashioned air.

This week in Australian foreign affairs: the suspension of passenger flights from India, Morrison at Biden’s Leaders’ Summit on Climate, Payne on the ASEAN Leaders’ Meeting, and more.