As the closest region to Asia, the ‘Top End’ remains a prized strategic location to Australia, which has enabled the Northern Territory to progressively integrate its economy with the region. Earlier this year, Serge DeSilva-Ranasinghe interviewed Adam Giles, the Territory’s Chief Minister, who also occupies the strategic Portfolio of Asian Trade and Engagement. The conversation focused on his Government’s initiatives to bolster linkages with Asia, the Territory’s geographic identity, the challenges inherent in attracting foreign investment, opportunities presented by the US forces being positioned in Darwin, and his Government’s future plans to engage Asia. 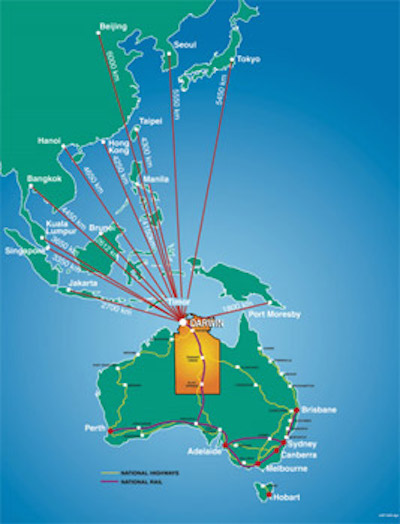 As the Minister for Asian Trade and Engagement what is being done to enhance the Territory’s linkages to Asia?

For centuries there has been trade between Aboriginal Territorians and Indonesians, whether that’s the barter trade or otherwise. This has created a culture, which has continued over time to the point where Northern Territory has a very good relationship with Indonesia. The Territory has always been able to get on and do business, in a trade perspective, but also in a social perspective. We consider ourselves quite different in that sense. The Portfolio of Asian Trade and Engagement has been active with successive Territory Governments. Back in the 1990’s, we had offices in several locations around Asia, but the offices were gradually closed down. As a result, we took a major backward step and now we’re in the process of trying to re-build those relationships. We have opened a new trade office in Jakarta, Indonesia, which will start to re-build our trade relationship with Asia.

From an economic point of view, Japan is now obviously our biggest trading partner with gas developments, and it will continue to be important into the future. But the Japanese relationship is a trade relationship, not a social relationship; whereas Indonesia is both trade and social.

When you look at it from a trade point of view, we talk about live cattle and our relationships with Indonesian people coming and going, Indonesians coming into the Territory and buying pastoral properties to obtain a reliable supply of cattle. In terms of the social dynamics with people with an Indonesian background, or an Indonesian-Australian background, these people are now just part of the Territory’s culture and society. They are seen as ‘Territorians’, not just say Indonesians living in the Northern Territory.

Timor is social, though we have good opportunities for working with Timor, which is a different dynamic to the rest of the country. Because we consider ourselves neighbours and good friends, we have the ability to open doors and conduct trade. Vietnam is trade oriented, while Philippines is social as well. Filipinos now represent the largest Asian population in the Northern Territory. With the Philippines and Malaysia, we now have direct air links from Darwin to both countries. I think that’s working a little bit on the holiday market, but relations aren’t at the point where there’s been significant development in trade. We have to do a lot more work in that area to be able to sustain those connections with the airlines.

This is how we work with those different regional dynamics within Asia. If we are going to be a powerhouse for the country and develop many of our mineral and agricultural opportunities, we are going to need people to be able to do that. We’ll need people to fill those jobs that are being created, though it’s not just about jobs for Territorians, but jobs for all Australians. While the relationships with Asia progress, so does the rest of the nation. That is what our geographical position offers to the country.

I’d like to get a better sense of how Territorians perceive themselves geographically. Your government has referred to Darwin as being ‘Australia’s Southeast Asian city’. What differentiates Darwin from other Australian cities that also share close ties to Southeast Asia?

It’s not saying that ‘Darwin is Asia’, because ‘Darwin is Australia’, but some of the cultural aspects we have here do give us a more Asia-centric dynamic. We also stress that Darwin is the gateway to Asia, but I think in a lot of ways ‘Darwin is Asia’s Gateway to Australia’ as well. That’s the way we sell ourselves, not just as ‘The Capital City of northern Australia’.

We don’t look at it from an Indian Ocean point of view. We look at who can potentially be our strategic partners in Asia, how we can work with each one of those nations recognising that we’re a small jurisdiction with only 1% of Australia’s population. Now we can’t cast too wide a net, we’ve got to pick the winners. We have to be smart about how we do our business and that’s why we’ve got a select handful of countries that we’re trying to work with.

So tell me, what challenges are there in penetrating the Asian market and attracting Asian investment into the Territory?

While the Territory has made its mark on some Asian countries, it hasn’t actually been developed sufficiently up until recently. It’s always been a challenge trying to enter into Asia. For example, the Australian Government is trying to develop a relationship with China, but I don’t know that the Territory has got that right just yet. If you look at Western Australia, they’ve got a good trading relationship with China, as have other parts of the country, whereas the Northern Territory doesn’t have substantial Chinese investment yet. With regard to Japan, we’ve done some gas dealings with them, but there hasn’t been a whole lot of penetration into areas outside of that. Similarly, the cancellation of the live cattle trade by the former Federal Government placed some challenges for the Territory with Indonesia. However, today the ground is very fertile to be able to make sure that we can generate outcomes with Asia.

Incidentally, do you see the US pivot to Asia being a potential impediment to these plans to engage Asia?

I know that there are some nations who express their concern at times, but from my position I think it does enhance regional stability. It also provides an opportunity for greater humanitarian response in times of crisis, which we have seen over a number of years, particularly in our region. I also think that their presence will provide a greater level of confidence and security for those who want to invest in Northern Territory, and northern Australia more broadly.

With the future in mind, can you be more specific of what you want to implement where the Portfolio of Asian engagement is concerned?

In terms of Asian engagement, what we want to achieve is to develop our trading relations with six key Asian countries. For us that’s what it’s about, access to markets and trade routes, and to have greater population exchange between Vietnam, Indonesia, East Timor, Japan, Malaysia and the Philippines into the Territory. The challenges are the ability to be able to have enough resources to support those trade routes. The other thing is about the ability to have greater connectivity because it can be sometimes hard to travel to those nations, though this is not such a problem with Indonesia. The other component is to rapidly develop our infrastructure. We have got the goods and services to be able to trade, so while we are setting up the trade routes we are also setting up the infrastructure in the Territory to be able to foster development opportunities.

Many thanks for the opportunity.

Serge DeSilva-Ranasinghe is a Research Fellow with the Perth USAsia Centre at the University of Western Australia.