The disaster created by COVID-19 is not gender neutral. This is not due to the characteristics of the virus, but rather the government’s policy responses to the pandemic itself.

The deputy executive director of UN Women suggested gains made to women’s rights over the last 25 years could be lost in just one year due to COVID-19, noting women’s COVID-19 care burden poses a “real risk of reverting to 1950s gender stereotypes.” A glance at COVID-19 campaign materials such as this recent UK example (later withdrawn), might suggest we already have. 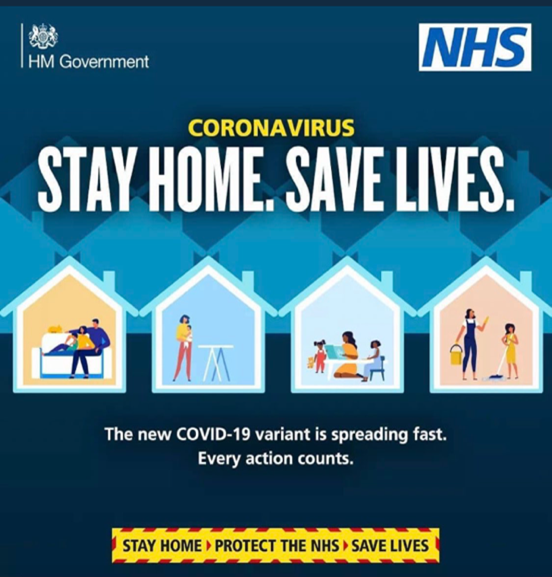 Many materials present women’s “natural” role as in the home as mothers and carers. With the advent of lockdown, women did quickly reassume these traditional roles and were encouraged to do so in the context of the health emergency being faced.

The International Coordination of Pandemics defines the current situation as a “Public Health Emergency of International Concern.” The focus on health as the sole emergency eclipses all the other domains that are and will be affected by the pandemic. In the UK, the government introduced the Health Protection (Coronavirus) Regulations 2020 which gave it emergency powers not only over the health system but people’s wider lives and livelihoods. Protecting the health of the nation through emergency measures is, however, often about “protecting” the nation’s health service.

The pandemic has revealed the failings of health systems around the world. While governments justify the problem as related to the unusual nature of the virus, others point to the long-term lack of public financing and the marketisation of health. Rather than recognising shortcomings in the system, government rhetoric plays on the virus as a “freakish” and unexpected act of nature. However, disaster studies teach us there is no such thing as a natural disaster. A “natural” hazard only becomes a disaster when it impacts on a vulnerable population that is unable to anticipate the event and cope with it. Slow-onset disasters are then even more political than natural events, as they are marked by a lack of political will to act. In this case, the World Health Organization’s (WHO) Global Preparedness Monitoring Board report of September 2019 noted the urgency to prepare for a worst-case scenario of a “a rapidly spreading, lethal respiratory pathogen pandemic.” Many countries did not, and have paid the price in lives lost. As the differential death rates across the globe demonstrate, while the virus is naturally occurring, the pandemic is far from “natural.”

In the “naturalist” disaster discourse, nature is constructed as a “hazard” and the COVID-19 discourse echoes this, provoking a warning that “Nature is the ultimate bioterrorist. It’s the one we should fear the most.” This construction of nature diverges from more usual notions of a nurturing Mother Earth, instead presenting it as the “negative of normal nature.”

Sandrine Revet suggests the pandemic should be understood not as an abnormal disruption of “normal” functioning, but rather the normal consequences of an “abnormal” functioning. Humanity has disturbed ecosystems to the point that microbes now jump species. Our current social and economic systems thus create new hazards and allow those hazards to become disasters. We then often look to respond to the disaster we have helped create through science and technology-based solutions, rather than social ones. Scientific discourse suggests we can rationalise complex social processes and allows for a positivistic elimination of culture and contexts as we cease to think about people, instead becoming ruled by “peaks” and “waves” in data.

In the UK, escalating death rates forced the prime minister to announce a second national lockdown. Rather than admit the policy mistakes that made this necessary, he suggested instead we needed to be “humble in the face of nature.” This naturalistic discourse sees the main policy solution as lying not in social change, but with technology – notably, with a vaccine that profits global pharmaceutical companies.

As leaders suggest they are guided by science, evidence has become a political instrument, leaving power interests to be obscured by seemingly “neutral” science and technology. Feminists have long taught us that “objectivity” is a generalisation from the subjectivity of quite a small group with power and prestige, and their experiences and normative ideals become generalised across the social order. For example, in the UK those with money and power supported prolonged lockdowns that most harm those living in poverty and precarity. While first heralded as an equaliser, it has since become apparent that as with all natural hazards, there is a differentiated impact at the  intersections of gender, class, race, and other characteristics.

The available data suggests there are marginally more male deaths (53 percent). While gender is a fluid notion, even accessing binary data is problematic, and by mid-July 2020, only 37 percent of confirmed cases reported to the WHO were disaggregated by sex and age. 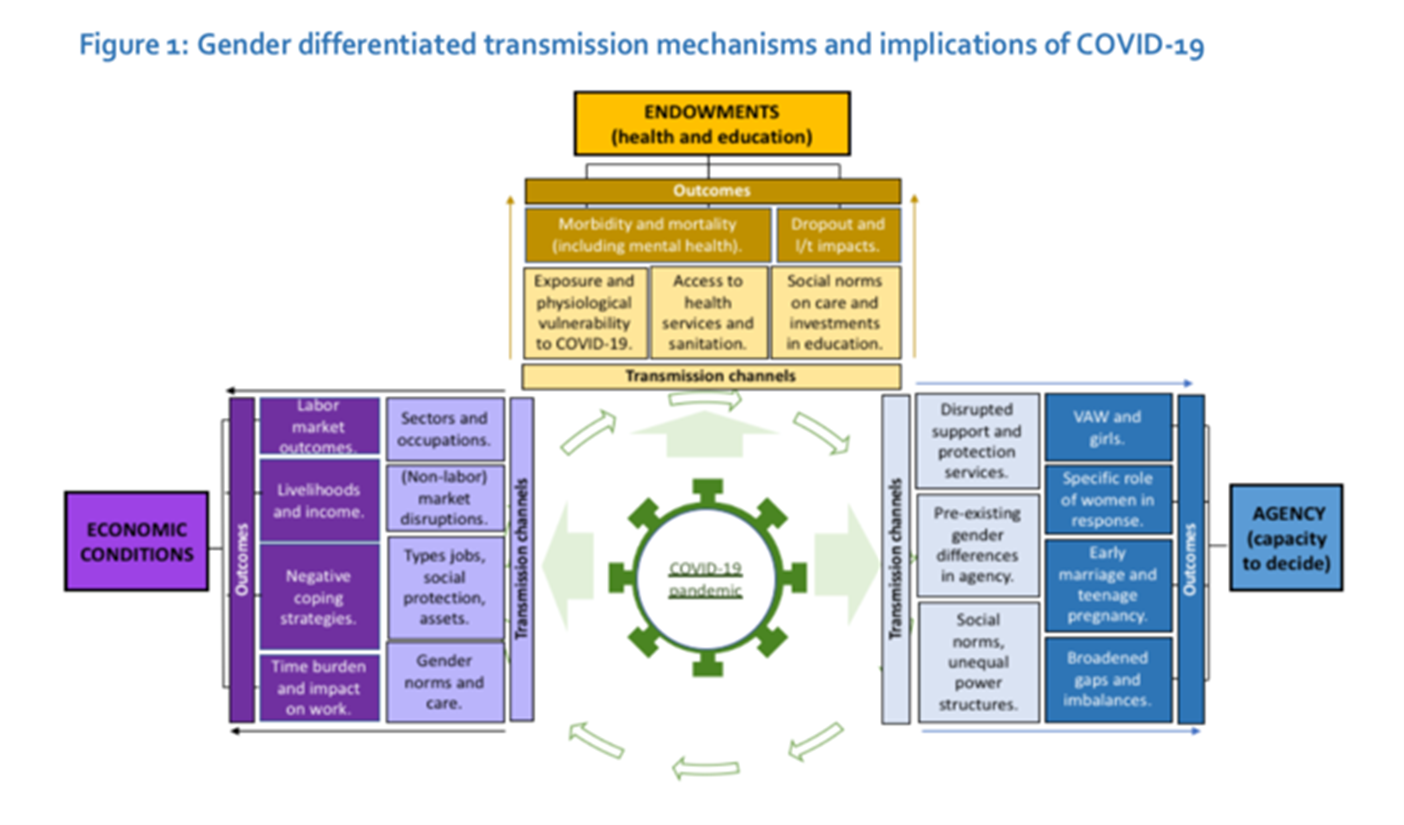 As this World Bank model suggests – transmission mechanisms are gendered. They are influenced by sex-based immunological differences, but more importantly, they are influenced by gendered behaviours, such as smoking, attitudes to risk, and prevention of risk. That is, behaviours associated with socially constructed notions of femininity and masculinity.

Times of crisis can bring a “crisis of masculinity” and the resultant super-normal patriarchy may see more pronounced displays of stereotypical attitudes and behaviours. The startling differential impact on women as reported by UN Women highlights gender stereotypical differences have real consequences.

For example, the data suggests infection rates among female healthcare workers are up to three times higher than their male counterparts. This may be related to the roles they play, or that their socially constructed role as caring women mean they get closer for longer to infected patients.

While women work on the “front line,” making up 70 percent of the health and social care workforce, women are also the majority of those caring for the homes of others, with estimates suggesting 80 percent of domestic workers have lost their jobs. Overall, UN Women suggests the threat to women’s employment is almost 20 percent greater than for men. This is not only due to the nature of their paid work, but also due to the nature of their unpaid work, with women more likely to be driven out of employment to look after children due to closed schools and daycare facilities. Reports suggest they are less likely than men to go back to work.

As well, lack of access to birth control and abortion services, plus men being at home more, may lead to increased unwanted or unintended pregnancies, which will further keep women at home. Decreased access to pre-natal services mean there may be as many as 56,700 additional maternal deaths.

Women’s health and wellbeing is further threatened by a possible rise in intimate partner violence. While data is lacking, there is heightened recognition and risk of gender-based violence, which is welcome if this brings increased resources. However, there is a danger – that violence becomes constructed as an outcome of the crisis, an outcome of the virus. It is not. It is a health emergency that impacts an estimated one in three women around the globe yet remains largely unaddressed.

The response to the COVID-19 health emergency relied heavily on women reassuming their “natural” roles as caring for the home and carers of children, the elderly, and the sick. Instructions to “stay home,” while constructed as a temporary break from normality, also construct a “new” normality based on old stereotypical gender roles in the home, which are often implicit in COVID-19 campaigns. If the “new normal” post-pandemic retains these “old” notions of gender roles and relations, the real disaster for women will be increased gender inequality.

Dr Sarah Bradshaw is a Professor of Gender and Sustainable Development and Head of the School of Law at Middlesex University, London. You can also find her on Twitter @DrSarahBradshaw.

Slaying Some Myths of Sovereignty and Intervention

The recent review of Luke Glanville’s Sovereignty and the Responsibility to Protect: A New History in Australian Outlook requires a response. Firstly, the responsibility to protect is […]

As the mid-terms change the make-up of US Congress, how do Australia and New Zealand protect and advance their interests by engaging with the US legislature?

Soccer is truly the world’s sport. It is played and watched by more people across the globe than […]