Afghanistan’s major regional external stakeholders, Pakistan, China, Russia, and Iran, will play a major role in that country’s future. But the five former-Soviet Central Asian republics are also strategically important and must be factored into the stakeholder mix.

The Spectre of Afghanistan: Security in Central Asia, is a very timely review of these Central Asian republics (CARs) – Turkmenistan, Uzbekistan, Tajikistan, Kyrgyzstan, and Kazakhstan – within the stakeholder mix. The book’s co-authors are Australian academics Dr Kirill Nourzhanov, a senior lecturer at the Centre for Arab and Islamic Studies at ANU, and Professor Amin Saikal, a former director of the centre. Both are highly respected academics, and their combined expertise across the Afghanistan-Central Asian spectrum is evident in the book.

There are two underlying reasons why the CARs are strategically important. The first is geography, and the second is population. Geographically, they cover a large area of some four million square kilometers, or slightly more than half the size of Australia, and despite their diversity, security is seen as interrelated. Thus, while only three republics border Afghanistan – Turkmenistan, Uzbekistan, and Tajikistan – all five are part of the Afghanistan spectre. Similarly, while only Kazakhstan borders Russia, all are seen as part of Russia’s “soft underbelly.”  Security relationships also reach out to other neighbours:  Kazakhstan, Tajikistan, and Kyrgyzstan who also border China, and Turkmenistan who borders Iran.

Their collective population exceeds 70 million and is ethnically very diverse, both within and across state boundaries, including Afghanistan.  Islam is the majority religion, and in four of the five, 90 plus percent are Muslim, mostly Sunni. The exception is Kazakhstan, where some 26 percent of the population is Christian (Eastern Orthodox). About nine percent of Turkmenistan and Uzbekistan’s populations are also Christian.  These factors also add to the complexity of the stakeholder mix.

Structurally, the book reviews the threat posed to the CARs by Afghanistan, how the CARs see and have responded to-date to that threat, how the major external stakeholders, especially the US, Russia, and China fit, and how, if at all, the CARs might contribute in future to peace in Afghanistan. The writing style is academic, and issues discussed and debated are supported by extensive reference notes at the conclusion of each chapter. Unfortunately, and this is my one criticism, the book has no supporting maps. Unless the reader knows the area well, a map or atlas is a necessary to aid reading. 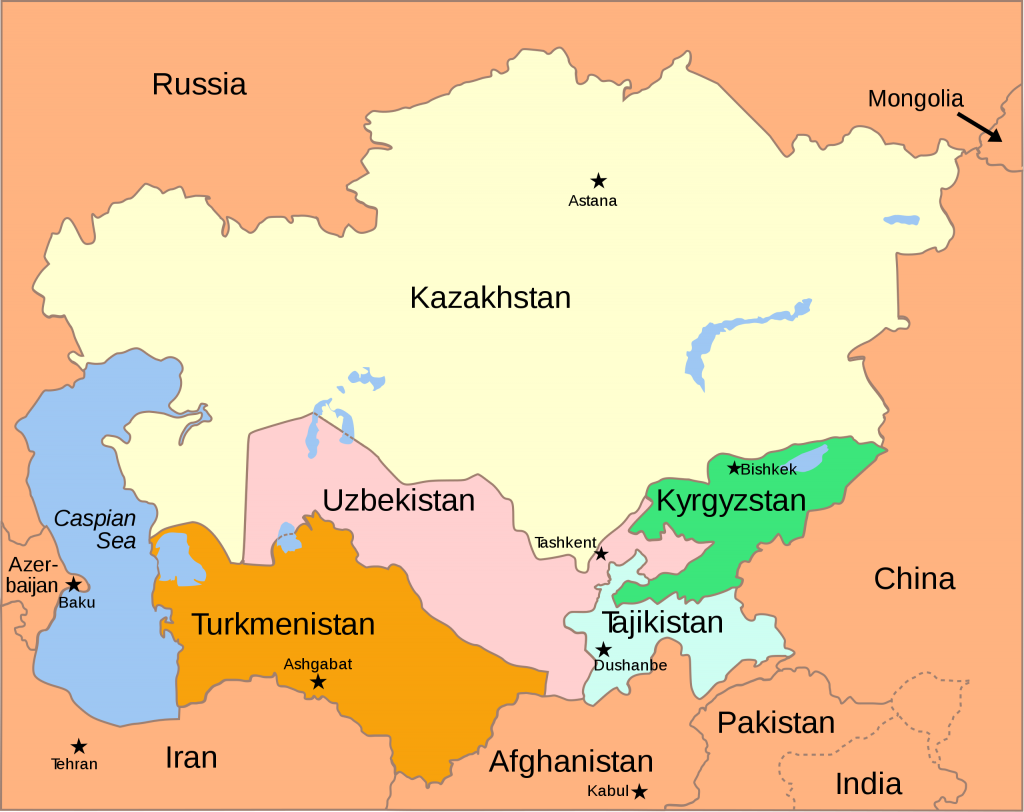 The lead chapter sets the scene for the remainder of the book. It covers events from the US-led invasion in 2001 until the signing of the US-Taliban agreement in March 2020. It details the challenges of establishing a new government to deliver “peace, stability, prosperity and democracy” that would suppress insurgency and ensure Afghanistan would never again be a hub for international terrorism. It also bluntly identifies the failed outcome of adopted US/Afghan policies to achieve this – a country “mired in poor governance, corruption, instability, insecurity, poverty,” a very significant “narcotics crisis,” a robust Taliban-led insurgency with control or influence over 60 percent of the country, and since 2016, the emergence of ISIS in eastern Afghanistan as a new security threat.

Despite this instability on their doorstep, the CARs assess Taliban ambitions as internal to Afghanistan. As the CARs are not hosting operational support bases for the International Security Assistance Force (ISAF), or hosting or supporting anti-Taliban ethnic proxies in Afghanistan, any direct threat from the Taliban, at least presently, is seen as minimal.

But potential threats exist. These include incidental cross-border spillage of fighting, and refugee flows from fighting. A more direct threat, as yet also minimal, is the small number of radical and extremist CAR nationals, some of whom have fought with ISIS in Iraq and Syria, that are now using Taliban-controlled areas in Afghanistan as a safe haven. Their long-term aim is to pursue their revolutionary ambitions in their home state.

The CARs’ response to date has been defensive. Measures include enhancing their counter-insurgency capability, and for those adjacent to Afghanistan, the establishment of buffer zones along the border. However, border security measures are not uniform. Inter-regional organisations seek to maximise the coordination of border security and policy coordination on Afghanistan generally, but presently, there is no intra-regional mechanism enabling this.

Notably, the book emphasises that collectively, the CARs see the solution to the Afghan threat as political and economic, not military. Two major components of their strategy for promoting stability and threat minimisation are socio-economic development and expediting a negotiated peace process. Unfortunately, the former, including US and Chinese initiatives to create integrated energy and transport infrastructure development to promote trade and transit across the CARs, Afghanistan, and South Asia, have stalled due to security concerns.

The book’s chapter on the effects of “Great Power” rivalries, notably between the US, Russia, and China, is a disturbing read. The US in particular is seen as playing a near zero-sum game at the expense of pragmatic cooperation, especially on counterterrorism. The fundamental differences are that the US is withdrawing and running down its interests, and its aid. Russia and China are involved indefinitely, politically, economically, and across the security spectrum, including counterterrorism.

The other important elephant in the room, also addressed in the book and perhaps the CARs largest extant threat, is narcotics and the related issue of organised crime. All CARs are affected and have active counter-narcotics programs, but outcomes to-date of these programs are mixed.

In conclusion, the book recognises that, as of its writing in 2020, Afghanistan’s future remains unknown. That remains the case today.  However, the CARs recognise the Taliban will be part of that future, and they must plan accordingly. The book highlights three related issues: any peace settlement should be acceptable to the Afghan people, regional neighbours, and the major powers; the CARs must develop coordinated policies towards Afghanistan; and given the US withdrawal, who will be the region’s major guarantor of peace, especially if the ISIS becomes a significant regional threat? My assumption is Russia will dominate this latter role.

This is a review of Dr Kirill Nourzhanov and Professor Amin Saikal, The Spectre of Afghanistan: Security in Central Asia (Bloomsbury, 2021). ISBN: 9780755637.

Ian Dudgeon is a presidential associate of the AIIA and former ACT branch president.

If anyone is the master of mega-trend analysis on Japan, it is Yoichi Funabashi, former editor-in-chief of the Asahi Shinbun and now chairman […]

In December 2012, Shinzō Abe achieved perhaps the most remarkable comeback of post-war Japanese politics by becoming the Japanese prime minister for a […]

Book Review: The Most Dangerous Man in the World

The long saga of WikiLeaks continues. He now faces extradition to the US to be tried for espionage, and Andrew Fowler's third update of his book completes the record to 2020.