The Pacific Step-up is billed as one of the “highest foreign policy priorities” of Australia. However, unfavourable domestic political forces have shaped Australia’s foreign aid budget, shrinking its overall size for the past decade.

The Step-up acknowledges that the future of Australia and Pacific Island countries is “deeply intertwined” and that Australia has a “abiding interest in the sovereignty, stability security and prosperity” of the region. It is shaped by the growing geostrategic tensions led by China in the region that threaten to undermine Australia’s long-standing influence. Retaining and reinforcing Australia’s regional leadership role acts as a golden thread that links Australia’s regional reprioritisation and the continued redirection of Australia’s aid spend.

Altruism is rarely the leading driver of aid spend. Upon election in 2013, the fiscally conservative Liberal-National Coalition moved swiftly to align Australia’s aid spend with its international policy agenda. The integration of AusAID, Australia’s stand-alone foreign aid agency, with the Department of Foreign Affairs and Trade (DFAT) enabled the government to move on what it saw as aid overspend and exert greater control over its direction. This argument was also advanced prior to a similar merger in the United Kingdom and built on similar mergers in Canada and New Zealand.

Today, Australia’s aid budget sits just above AU$4 billion, which is down from its peak at just above $5 billion in 2014/15. In the past year, has DFAT benefited from a minor boost in funding to address matters relating to COVID-19 and regional competition. 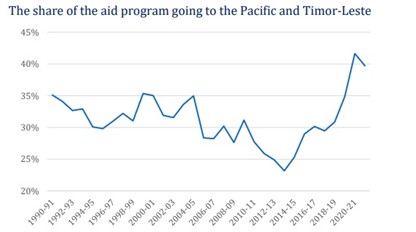 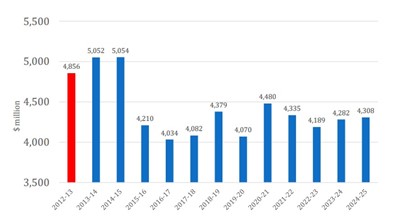 Aid Trajectory Under the Coalition

Professor Stephen Howes of the Development Policy Centre at the Australian National University has pointed out that while over the last decade the world has largely increased its spending on aid, Australia has been cutting it. Some, including Howes, have also stated that Australia will increasingly come under international pressure to commit to greater funding. Though it’s important to note that international pressure has had only a limited impact on Australia’s climate change policy, for example, and would be unlikely to force any major changes as domestic political considerations still take precedent.

Its perception suffers from both public misunderstanding and a general ambivalence amongst voters. Polling conducted by the Lowy Institute in 2018 and 2019 found that the foreign aid budget was the only policy area in which more Australians said it should be decreased rather than increased. It was also found that participants were largely misinformed about aid spending, finding that on average it was believed that 14 percent of the national budget was spent on aid when it actually sits at 0.8 percent.

The aid budget is often a target of political fringe parties in Australia. For example, Pauline Hanson’s One Nation has called it their “moral duty to redirect the foreign aid budget” back to Australia. For progressive voters, foreign aid does not carry enough weight as a political issue to change their voting position if it was to be increased. As result, the Coalition stands to gain little politically by increasing it, which first exposed it to cuts and then helped limited its growth as to mitigate the bleeding of votes to fringe political parties.

This trend was confirmed by the Lowy Institute’s 2021 poll, where data showed conservative voters were less inclined to support COVID-19 foreign aid initiatives compared to progressive voters. However, this poll did find that a significant number of respondents were in favour of Australia paying for vaccine access for Pacific Island countries (83 percent) and Southeast Asian countries (60 percent). This is trend is also consistent with strong public support of providing humanitarian aid in times of crisis.

Another recent study on attitudes to aid in Australia and New Zealand found that China’s rise had changed the way in which both political elites and the public viewed aid spend and the need to prioritise the Pacific region. These results show how important effective messaging is when it comes to public policy.

Interestingly, the latest Pacific Aid Map by the Lowy Institute has shown that China’s aid to the Pacific region had dropped in 2019 to its lowest point since 2012. Author Jonathan Pryke noted that from “preliminary assessments don’t show a rebound of activity from China in 2020.”

Due to these domestic political pressures, when money has been committed over recent years it has seen the government creatively act to minimise the use of the term “aid” and often place emphasis on “temporary” increases to mitigate any blowback. This is often coupled with opaque reporting methods that make pinning down the actual size of Australia’s spend more difficult.

It is unlikely that any significant or swift changes to either size of the aid budget or its direction will occur even with a possible change in government in early to mid-2022. This is driven in part by the immediate financial fallout stemming from Australia’s COVID-19 lockdown strategies but also broad bipartisan consensus on the prioritisation of the Pacific region.

While some new commitments, likely revolving around climate change, could be expected under a Labor government, the size of the aid budget will remain largely unchanged or limited to temporary increases for the immediate future.

Australia’s aid spend will continue to converge with the strategic goals outlined by the Step-up. Former foreign minister Julie Bishop recently alluded to this when she reflected that “in this more hostile international environment, it is critical that all arms of foreign policy are coordinating and working to achieve common goals.”

The risk for the aid budget is that increased spending could flow unequally into areas such as defence and leave other vital instruments of statecraft behind. The aid budget’s future will require new political champions to rise to the challenge in terms of advocacy and countering misconceptions that undermine its support.

While aid spend has unarguably languished, a key legacy of the government will be the significant growth in diplomatic missions globally, particularly in the Pacific. New missions in Palau, Cook Islands, Niue, the Republic of the Marshall Islands, and French Polynesia have been opened. This has given Australia the largest diplomatic network in the region of any country. The value of in-country networks is vital to establishing the basis for greater aid spend.

Australia’s aid budget has been exposed to the frigid political winds that have worn at it, but at the same time more is being demanded of it.

Chinese Aid to the Pacific: What are the Concerns?

What is the nature of Chinese foreign aid to the Pacific? How has this shaped Australian concerns?

Can China Be a “Responsible” Actor in the Pacific? Some Implications for Australia

The Solomon Islands is coming under pressure to shift its diplomatic recognition from Taiwan to China. In an interview with the ABC, Prime Minister Manasseh Sogavare admitted that his country is being pressured to recognise Beijing, but that there is an equally strong push for the Solomons to stick with Taiwan: especially from Australia.