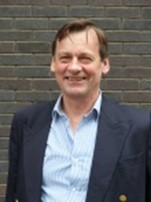 Richard Iron was educated at the University of Cambridge in the UK. He served for 37 years in the British Army, largely spent on operations in Northern Ireland, the Sultanate of Oman, the Falkland Islands, the Balkans and Iraq.

He led a UK/US planning team in Kuwait for the 2003 invasion of Iraq and conducted the British Army’s subsequent analysis of the Iraq War. In addition, he was an expert military witness in the Sierra Leone War Crimes trials, where he worked with ex-members of various guerrilla groups.

He was the Chief Mentor to the Iraqi commander in southern Iraq, planning and implementing the 2008 operation to free Basra from Iranian-backed Shi’a militias. Later, he was Defence Fellow at the University of Oxford and worked for the UK’s Chief of Defence Staff on developing the UK’s capacity to think and work strategically.

After leaving the Army in late 2011, he led the operation to provide security to the remaining US presence in Iraq. As a consultant he wrote and delivered strategic exercises for Royal College of Defence Studies in London and the Omani National Defence College in Muscat. He was also a visiting fellow at the University of Oxford Changing Character of War programme.

He was Chief Operating Officer/CEO of Equilibrium-Global, an international strategic consultancy based in London. Major projects included advising the Kingdom of Bahrain on how to survive in the post-hydrocarbon age and working with the King of Jordan to roll back radical Islam in the Horn of Africa.

He moved to Melbourne in late 2015 to be with his wife, now a judge of the Supreme Court of Victoria. He continues to write and lecture widely on strategy, the Middle East and counter-insurgency. His current research topic is how wars end. He was lead editor of British Generals in Blair’s Wars and is writing a history of the Sierra Leone war from an African perspective. He was elected President of AIIA Victoria in October 2020.