On Tuesday 10th September, AIIA NSW welcomed James Wise, former Australian Ambassador to Thailand, for an address based on his recently-published book Thailand: History, Politics and the Rule of Law. In his presentation, Mr Wise offered interesting insights into the nature of Thai politics as well as the unique economic challenges that Thailand faces as a middle income country.

While sharing political and developmental challenges with many countries – economic disparity, inter-generational tensions, disputes over the allocation of state resources – Thailand’s political culture complicates the checks and balances processes which would prevent disagreements from escalating to disputes, and thus allows for military intervention to become more commonplace in the exercise of Thai politics; hence their coup culture and over 20 new constitutions since 1932. Where most governments have three key components – legislature, executive and judiciary – Thailand has two additional powerful institutions, the monarchy and the military, which exert significant authority over the other government branches. When crises arise, the monarchy and the military play a decisive role.

Thailand’s lack of investment in human capital and enquiry-based learning is a second crucial component limiting Thailand’s prospects. With an extremely nationalistic rhetoric and vision for Thailand’s nation-building dominating political discourse, education in Thailand is predominantly rote learning. Paired with tough laws on sedition, criminal defamation and lèse-majesté, Thailand’s education system discourages the active questioning necessary for stable democratic systems and has ramifications for Thailand’s prosperity. Thailand maintains reasonably independent institutions which stabilise macro-economic policies. It practices the rule of the law and fosters a relatively open economy (particularly in manufacturing). But the hesitation to liberalise Thailand’s education system has led to the country being stuck in what Mr Wise referred to as the “middle income trap”.

Nevertheless, Mr Wise was careful to note Thailand’s successes. Its GDP growth of 9.2 per cent in the 1980-89 period had exceeded even that of China, and remains at around a healthy 4 per cent. Although Thailand has experienced over 20 coups d’état since the late 1940s, bloodshed has only occurred in a handful of instances involving military intervention, in 1973, 1976, 1992 and 2010. Thailand has otherwise been “very good at coups”. It has also been highly successful in assimilating the large Chinese minority through generations of inculcation and an inclusive vision of state membership. The politics of Thailand is not a politics of race.

Mr Wise outlined the ways in which Thailand resisted colonialisation, managing competing colonial aspirants (notably France and Britain), securing its borders and gradually, in effect, colonising itself under a traditional political authority with the monarchy as the apex of a highly hierarchical society. Modern Thailand has succeeded in a wide range of areas and has pulled tens of millions of Thais out of poverty in the last 30 years. The challenge now is to move up into the high income bracket.

During question time, Mr Wise was asked whether, taking account of the antics of Thailand’s current king, Maha Vajiralongkorn, Thailand’s monarchy would remain important in the future. In response, he noted the strength of the Thai monarchy, which is the richest in the world with an estimated worth of $30 billion (followed by Brunei and Saudi Arabia). The King has taken a number of steps to re-assert and consolidate his political power since his accession. The Thai people are deeply connected to a vision of Thailand as a monarchy irrespective of the characteristics of individual members of the royal family. It seems unlikely Thailand would progress with a national vision devoid of a King or Queen, though succession is a problem yet to be resolved.

Mr Wise drew the key conclusion that, when considering the uniqueness of Thai politics, the central question should not be so much who should govern but how Thailand should be governed. 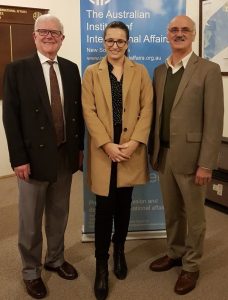