He said that, despite the region’s lower priority for Australia than the Indo-Pacific and the US, we have a long history of military involvement. A major reason is our alliance relationship with the US. The 1951 ANZUS Treaty committed parties to ‘consult together’ if one party’s security, political independence or territorial integrity is threatened. This is widely accepted as fundamental to Australia’s security and, along with soft connections through cultural and political symmetry, significantly influences Australian foreign policy in the Middle East. We support US initiatives as an investment: the Middle East is where Australia pays our ANZUS dues, without the costs that might apply closer to home (for example if we joined US freedom of navigation naval exercises in the South China Sea, affecting our interests with China).

Dr Parmeter noted that Australia has mostly got out of recent Middle East military interventions lightly, with only one (non-combat) death in Iraq. However, 41 Australian Defence Force personnel were killed in our 2001 Afghanistan involvement. Australia tends to do better in the region when its involvement is carefully planned, based on professional threat assessments and analysis of intended outcomes.

Inconsistencies, carelessness and lurches between activism and passivity undermine Australia’s Middle East policy. For example, former Foreign Minister Kevin Rudd’s proposal during a visit to Egypt for a nuclear weapon-free zone in the Middle East had not taken realistic account of Israel’s commitment to its nuclear capacity. Comparably, Prime Minister Morrison’s recognition of West Jerusalem as Israel’s capital city was contrary to Israel’s claim for the entirety of Jerusalem, while undercutting the need to negotiate Jerusalem’s future as part of an eventual resolution between Israel and its Arab neighbours.

Pro-Israel positions have long-standing domestic support, partly due to the strength of the Israel lobby. Our voting position at the UN has become more pro-Israeli in recent years. Australians of Arab descent have been slow to adopt lobbying techniques, as their focus is on community and sectarian issues.

Dr Parmeter suggested that the Middle East encapsulates a tension of modern Australian foreign policy: is Australia an obedient middle power who should continue to follow US priorities, or should it exercise its upper-middle power might and play a greater and more independent global role?

Prime Minister Scott Morrison’s recent statement that Australia will ‘seriously consider’ military intervention in Iran if the US requests seems to be code for Australia’s continued unquestioning US support. But there are now doubts about the US commitment to its Western European and other allies under the Trump administration. Leading defence strategist Professor Hugh White proposes more independent arrangements for our defence (at greatly increased expense). Lowy Institute polling showed that support for the Australian military to be fighting violent extremism in the Middle East is down 11 per cent from 2017 to a bare 50 per cent this year.

Dr Parmeter recommends more considered planning and full consultation with Middle East experts before announcing policy regarding that region. He also argues against blind commitments to the US, stating that Australia should utilise its bargaining power more strategically.

During question time, the audience was keen to hear about how Dr Parmeter obtains his news about the Middle East region. He recommended mainstream newspapers including Al Jazeera, The Washington Post, and The New York Times, and encouraged the audience to read news published from within the region (such as English versions of Israeli newspapers). 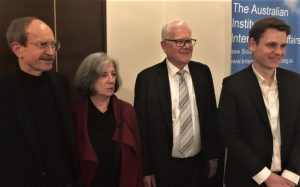