Major General Smith called for Australia to increase its role in the United Nations, and hold true to its ongoing support as a foundational member state, undeterred by the hesitations of other nations. Major General Smith brought to light wide-spread disconnect with the United Nations felt by the general Australian population, using the example of the United Nations Sustainable Development Goals, unheard of by many even in the AIIA audience, yet profoundly important to global prosperity and peace. The seventeen Sustainable Development Goals were agreed to by the United Nations General Assembly in 2016 and aim to mobilise global efforts to end poverty and hunger, increase rates of education and gender equality, and make lasting positive action against climate change. Whilst the Australian public too often focuses on the failures of the United Nations, we should rather be thankful for the enormous good that the organisation’s programs have brought to the world, including much work in the Asia-Pacific region to Australia’s benefit, including peacekeeping missions in East Timor, Bougainville and the Solomon Islands. These accomplishments are not reason for complacency, but rather a call to action to ensure that the work continues. In today’s difficult times of a changing global balance of power and increased threats from climate change, the United Nation’s broad multi-lateral structure makes it the most appropriate vehicle for ensuring continued global progress and prosperity.

Despite Australia’s longstanding relationship with the United Nations, Major General Smith believes it to be turbulent at times and rarely consistent: he attributes this to domestic political divergences rooted in a broader cultural phenomenon, reflected in Australia’s hesitancy to fulfil its potential as an independent, active and confident player on the world stage. Too often Australia follows when it could lead. Despite the current US Administration’s discontents with the United Nations, Australia should remain supportive of the organisation during this time. This support begins with government plans to educate the Australian public about the programs and goals set by the United Nations and agreed to by the Australian Government. As the Major General stated in response to a question from the audience concerning how best to convince people of the importance of the United Nations, it is about reminding people that the United Nations may not be perfect but is a force for good. Australia and the world would be worse off without it. 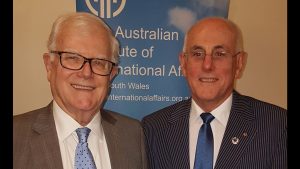