On Tuesday the 24th of May, Mr James Choi addressed the Australian Institute of International Affairs (AIIA) NSW. Mr Choi is currently the Managing Director of J2 Advisory in Canberra, and formerly served as Australia’s Ambassador to the Republic of Korea (with accreditation to the Democratic People’s Republic of Korea). His address explored South Korea’s position in the Indo-Pacific region, as well as the implications of the recent election of President Yoon Suk-yeol for Australia-Korea relations.

Mr Choi commenced by discussing the historic invasions and occupations that precipitated the emergence of the contemporary Republic of Korea (ROK). Through examining the socio-political dynamics that characterised the recent election, Mr Choi argued that the election of President Yoon Suk-yeol was swayed by domestic, rather than foreign, policy concerns. Yoon was elected as ROK president with a precarious margin of 0.73%. The outgoing President Moon retains an approval rating of 40%, and in opposition he still holds 171 seats in parliament. Nonetheless, the successful election of President Yoon reflects the increasingly polarised state of ROK politics.

Mr Choi outlined former President Moon’s foreign policy legacy. While President Moon favoured strategic ambiguity and sought an evenly balanced relationship with both the US and China, Yoon Suk-yeol’s campaign trail had been characterised by provoking China. Departing from Moon’s populist approach towards Japan and lukewarm attitude towards the Indo-Pacific region, President Yoon appeared committed to ameliorating relations with Tokyo. Mr Choi saw US President Biden’s recent visit to the ROK as the catalyst for a return to the original shape of the US-ROK alliance. This reversion to the US sphere of influence raises a profoundly complex issue for the ROK, which is constrained not to have to choose between the US and China. President Yoon’s foreign policy platform had pushed for strengthening the ROK defence capabilities and committed to expanding the scope of South Korea’s foreign policy beyond border concerns.

Drawing on his experience as Ambassador to the ROK, Mr Choi contested the Moon administration’s view of Korea as a ‘small country’: he argued that the economic potential of the ROK makes it a potentially significant geopolitical power. Reflecting on the joint ROK-Australia creation of the Asia-Pacific Economic Cooperation process in 1989 and on the establishment of the G20 forum, Mr Choi emphasised the propensity for successful geo-strategic and economic collaboration between the two countries.

Mr Choi then answered audience questions on the likelihood of the ROK’s admission into the Quad, on whether the current geopolitical climate lends itself to successful Korean reunification, and on the degree to which Yoon Suk-yeol’s character will affect his presidency.

Mr Choi responded that the ROK’s admission into the Quad grouping is unlikely given Japan’s potential reservations and the need to consolidate the Quad’s agenda before the addition of new members. On Korean reunification, Mr Choi expressed the conviction that the present is a most unlikely period for the emergence of a unified Korea given North Korea’s reluctance to engage in intergovernmental dialogue and the unwillingness of outside powers, notably China, to countenance reunification. Finally, Mr Choi suggested that President Yoon is not unprincipled, but rather lacks an understanding of statesmanship. The true test of Yoon’s administration will be its response to Chinese coercion, as the trading partnership with China accounts for 55% of the ROK’s GDP. 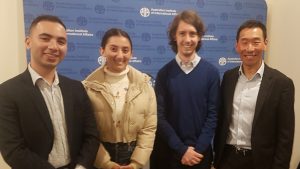