Tuesday 11 July saw the AIIA NSW welcome Dr David Kilcullen, an author, strategist, and leading expert in the fields of modern warfare and unconventional armed conflict. He gave an overview of the defence environment since the end of the Cold War, as well as a summary of his upcoming book “The Dragon and the Snakes: How the Rest Learned to Fight the West”

The title of his book is inspired by a comment made by President Clinton’s first CIA Director, James Woolsey. When outlining what the challenges he believed the US faced, following the dissolution of the USSR, Woolsey explained:

“We have slain a large dragon, but we live now in a jungle filled with a bewildering variety of poisonous snakes. And, in many ways, the dragon was easier to keep track of”

What Dr Kilcullen calls the ‘Woolsian’ security environment runs from February 1990 until March 2003, – a world of weak, failing states, and unpredictable non-state actors. Following the 9/11 attacks and the subsequent Iraq and Afghanistan wars, the focus remained on non-state actors and narrowed to the neo-salafi Jihadist adversary. Dr Kilcullen argued that what we are now seeing is a less hierarchical and proliferated set of terrorist organisations, who are arguably more effective than before, and this is the fallout from the Wollsian era  of US  style military and foreign policy.

Dr Kilcullen argues that the current era is the return of the dragons, but they look a little different this time. Not only has technology rapidly changed (with the rise of surveillance and smart security), but non-state actors have access to this technology. On the other hand, states have come to copy the techniques used by non-state actors. Dr Kilcullen used evolutionary biology as a method to look at the ways adversaries (and even friendly actors) are responding to the conditions the West created after the end of the Cold War. Dr Kilcullen uses a ‘fitness landscape’ to describe the reproduction of these adversaries in relation to their environment. States that follow a US style military doctrine) have contributed to an ‘artificial selection’ evolutionary process. This has seen the adaptation and proliferation of a particularly strong breed of terrorist through a ‘prey and predator growth cycle’. Dr Kilcullen also argued that state actors have adapted in response to US foreign policy and military doctrine. Case studies of Russia and China were described.

The entry of a small contingent of US ground troops into Libya (contrary to a promise made to remain out of the country), as well as underlying blame placed on the West for the USSR collapse has led Russia to be more antagonistic to the West. For China, the US presents a pacing threat, that is, a threat to which military and diplomatic countermeasures needs to be actively developed. Both states have learned from US weaknesses. They now focus on countering the advantages the US possesses. For example, China focuses on their anti-access/area denial capabilities, while Russia works to develop their cyber abilities.

Questions on the evening focused on the future of Australia in this new environment. Dr. Kilcullen suggested that Australia also has the opportunity to adapt. Australia faces great challenges in an unpredictable environment and we could take on a more dynamic and self-reliant role. Doing so would involve tough national conversations about energy, economic priorities, security alliances, and what freedoms the country is willing to trade in for a sense of safety. 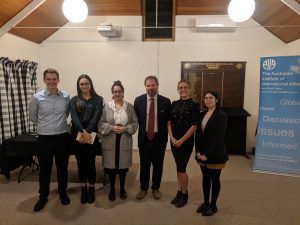