Dr Rodger Shanahan, Research Fellow at the Lowy Institute, spoke at AIIA NSW on the evening of Tuesday 18 October.

He set current international security and terrorism issues, including Islamic fighters joining ISIS from other countries like Australia, in the context of the continuing problems in Iraq and Syria. Iraq was a “binary” struggle between supporters of the post-Saddam government and its ISIS and other opponents; a solution was achievable.

But Syria was much more complex: as well as pitting Russia and Iran on one hand against the US and its allies on the other, there were multiple other players, including the Kurds as well as competing Islamic opponents of the Assad regime. US influence on the situation was diffuse and limited. The idea of no-fly zones, for example, was ill-defined and impractical: elements with on-the-ground capacity would easily be able to work around such zones with land-based attacks. Russia and Iran would have much more say in what finally happened in Syria.

While the great majority of pro-Islamic fighters in Iraq and Syria were from the Arab states of the region, the number of foreign fighters was approaching 40,000, most of them with ISIS. Two-thirds were from the Caucuses (mainly Chechens). There were around 5,000 from western Europe, 4,700 from Russia and 500 from Indonesia. The combined estimate for the US, Australia and New Zealand was 400 – Australian numbers had peaked at around 100 (with 44 fatalities). Their activities included planning, training, mentoring, providing and managing finance, and smuggling supporters across borders.

Looking to the future, much would depend on the outcome in Syria. ISIS might collapse, or it might suffer a more gradual degrading of its strength. Foreign supporters of ISIS would in many cases try to leave; those seeking to do so across the 900 kilometre Turkish border would cause destabilising pressures in Turkey and beyond. Some would stay behind; about half had already settled in the region. All would feel betrayed, and there would be attempts at global jihad, especially against Russia. Other continuing support would be more passive, including funding. Al-Qaeda, as a less aggressive movement than ISIS, might gain support as ISIS became weaker. 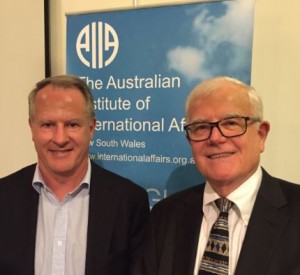 In response to questions, Dr Shanahan agreed that Turkey had played a particularly cynical and manipulative role over Syria. He described the profile of Islamic fighters from Australia as young and not well-educated (those from the UK were slightly more educated, perhaps reflecting the priority given to education by South Asians). He did not agree that western governments should re-examine their Middle East policies as a way of reducing the motivation of Islamic fighters from western countries: the implicit political contract precluded taking up arms against government policy democratically endorsed by the electorate. The idealistic appeal among dissatisfied Islamic youth in western materialist countries of Islamic preachers, using the internet for radical proselytising, was hard to counter. Longer-term counter-terrorism would require increased international cooperation (for example on extradition) and addressing the deep-seated problems of the region.

In discussion with the AIIA interns, Dr Shanahan was pessimistic about Syria’s future. The Assad regime would probably prevail, though with real control over only a rump of present Syrian territory. Russia and Iran would have consolidated their interests in Syria, including Russia’s strategic assets; the US would have to be content with the successful removal (at Russian instigation) of Syria’s chemical weapons capacity and the probable replacement of Bashar Assad by another Ba’athist figure. There was no realistic basis for a viable Kurdish state, especially given the virulence of Turkey’s opposition. Iraq by contrast seemed to be moving gradually towards stability under the widely recognised post-Saddam government.