The affirmative team argued that the avoidance of nuclear war had been precarious. The Mutually Assured Destruction (MAD) notion of the Cold War had been of doubtful validity. There had been at least three occasions on which the nuclear trigger had almost been pulled, and the possession of nuclear weapons by major powers had not made them immune to military challenges: nuclear weapons use was so risky that these weapons were of limited real value. There should be no complacency about existing international agreements such as the Non-Proliferation Treaty (which provides only optional targets, not obligations under law) and the Comprehensive Nuclear Test Ban Treaty: more effective action was needed. Serious nuclear accidents had demonstrated the dangers of nuclear proliferation even outside military applications. Future generations would suffer from the gigantic, wasteful expenditure on these weapons which was diverting resources from major problems such as climate change. The treaty already has weight in international law, and if Australia were to sign that would add pressure on other countries to do so and contribute to delegitimising nuclear weapons. 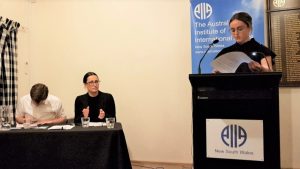 The negative team argued that it was important to do whatever was possible to limit the risks of nuclear war, but that the prohibition treaty was not effective in this regard. The Australian government, which was opposed to signing the treaty (as were most Western countries, whether or not they were nuclear-armed) was in every way fully committed to realistic, productive anti-nuclear arms measures such as the test ban treaty and the non-proliferation treaty. The prohibition treaty would remain ineffectual unless many more states were to sign it, and this was not a realistic prospect. Successful arms prohibition treaties existed, such as those banning landmines and chemical and biological weapons. But their effectiveness had required widespread – almost universal – international endorsement (and it was not clear that their provisions were in any case being fully complied with). Numerous other problems required more urgent attention, such as the increasing militarisation of police forces, including in Australia. 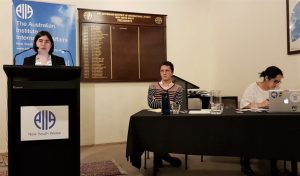 The debate was adjudicated by Kevin Boreham, international law expert and former diplomat. He considered that there was little to choose between the two sides. Both had presented soundly-researched arguments and had made their presentations well. There could have been more attention to international aspects, including the pressures resulting from the destructive Trump presidency. The International Court of Justice had made the important decision that the use of nuclear weapons was contrary to international law. On balance he declared the affirmative side the winners.

In the subsequent question and answer session, audience members expressed concern about the continuing, even accelerating, nuclear arms race. Signing the prohibition treaty was seen as a worthwhile addition to international attempts to address this problem, with its grave risks to peace and human survival.