On Tuesday 16th August AIIA NSW hosted Dr Niro Kandasamy at Glover Cottages. Dr Kandasamy is a lecturer in history at the Sydney University who has published extensively on diaspora, women and bilateral relations with Sri Lanka. She spoke of her own personal journey, seeking asylum in Australia as a Tamil woman.

Dr Kandasamy began her presentation by turning to the past, describing how the current crisis resembled many crises in recent history. With independence from Britain, the colonial non-discriminatory management of community relations was replaced by policies favouring the Sinhalese over the later Tamil immigrants. This had weakened established sectors of the economy, such as rubber and tea plantations and exports.

From 1948-1977 Sri Lanka was characterised by socialist policies. However, liberalisation saw the eradication of state welfare programs, price controls and nationalised plantations (tea and rubber). This led to increased inequity, greater levels of Tamil violence and an economic crisis much like 2022.

While protests, dissatisfaction with government and poor economic management have all occurred in the past, this was previously confined within the Tamil population. This was the first time that protests in the country had extended to the rest of the community. The president has resigned, and this shows that protesters have the capacity to change the structure of government.

The current Sri Lankan economic crisis is the combined result of governmental reforms, fertiliser bans, tax cuts and COVID border closures. In recent weeks, Sri Lanka has been characterised by food shortages, limits on civilian use of fuel, military forces in schools and tumultuous aid negotiations.

Sinhalese Buddhism was an important factor. The 1978 constitution provided that it was a duty of the state to “protect and foster Buddhism”. This is the platform under which the current government appeals to their majority voting base, exacerbating the separatist tendencies we see today.

In 2022 the military received a disproportionate 12.3 per cent of the government’s budget, despite the civil war ending over a decade ago. In the predominantly Tamil North and East, there is one member of the military for every six civilians. In that region, “war-tourism” under army control had displaced Tamils from productive agriculture.

On Australia’s role in the region, Dr Kandasamy noted that Australia has been accused of breaching its international obligations regarding freedom of movement, turning away Sri Lankan immigrants. Dr Kandasamy asked that, in light of the current crisis, we assess civilians fleeing the country outside the limited categories of existing refugee law.

In response to questions on international opinion of Sri Lanka’s ethnic and economic crisis, Dr Kandasamy noted that the United Nations has criticised the government’s treatment of Sri Lankan Tamils. She discussed current engagement with the international community, including Sri Lanka’s struggling negotiations with the IMF for a bail-out package and the nation’s growing relationship with China and Russia. Regarding the relationship with China, she stated that it was perhaps too late to disengage a relationship dating back to the civil war.

When asked about the structure of Sri Lanka – “an island or a country” – Dr Kandasamy acknowledged that some form of partition was a possible solution. She stated that she believed positive change could occur in two ways: 1) a Federal restructuring which paid greater mind to the separatist nature of the country and Tamils; or 2) a return to the historical structure of the country:  Sri Lanka had never been a unified state and perhaps this was at the root of many political and social issues facing the country

Dr Kandasamy agreed that measures should be taken to diversify trade, making use of the agriculture industry and continuing to expand tea and tourism sectors. 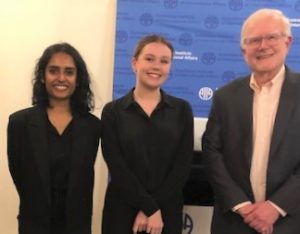