The Australian Institute of International Affairs and the International Law Association (Australian Branch) are proud to announce this year’s Peter Nygh Hague Conference Internship has been awarded to Andreas Sherborne.

The Internship supports a graduate or post graduate student from an Australian law school to undertake an internship with The Hague Conference on Private International Law (The Hague Conference) in the Netherlands by providing funds to contribute towards living expenses and cover the cost of travel.

As a recent law graduate of the Australian National University (ANU), Andreas Sherborne’s interest in international law was sparked when a course on international private law began to connect his earlier studies and provide him a holistic appreciation of the law. This interest has guided his studies and led him to graduate the top of his cohort with First Class Honours and later publishing his honours thesis in the Journal of Private International Law. While completing a summer course on scholarship at the University of California Berkeley, Andreas was also awarded the highest grade for his research analysis on the ability of social movements to effect constitutional change.

Besides his academic excellence, Andreas has worked with distinguished legal experts including Professor Neil Gunningham at ANU. Andreas also has practical legal experience, having worked both as a paralegal and summer clerk for the global law firm, King & Wood Mallesons. 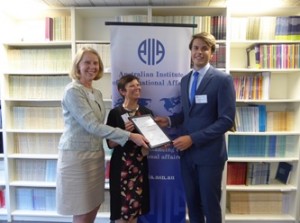 With his strong interest in international affairs, academic excellence and overseas experience, Andreas is well equipped to meet the challenges of working at the Hague Conference. He will work on the upcoming 2017 Special Commission on the Judgments Project.

For further information about the Peter Nygh Hague Conference Internship please see https://www.internationalaffairs.org.au?s=Nygh+Internship.  Applications for the 2018 award will close on 30 September 2017.

Dr Nygh’s family donated funds to establish the Peter Nygh Hague Conference Internship. An additional $50,000 was donated by the Commonwealth Attorney-General’s Department, and Allens generously supports the administration of the award. Further donations are being sought to support this initiative. All donations are tax deductible.

The Australian Institute of International Affairs (www.internationalaffairs.org.au) was established in 1933 as an independent non-political body to promote an interest in, and understanding of, international affairs. The AIIA operates nationwide with 1,300 members across seven State and Territory branches. The AIIA provides a forum for discussion, and educates and disseminates ideas via its journal Australian Journal of International Affairs and book series including Australia in World Affairs. The Governor-General of Australia, His Excellency General the Hon Sir Peter Cosgrove AK MC (Retd) is the AIIA’s Honorary Visitor and Patron.