On 17 September 2019, Professor Michael Wesley, Dean of the College of Asia and the Pacific at the Australian National University, addressed AIIA NSW on the contemporary rivalry between the US and China.

Professor Wesley contextualised the US/China tensions through the lens of the USSR/US Cold War. He defined what a Cold War is: an intense and irreconcilable rivalry over global leadership without direct conflict and with strong polarising forces on other countries. He noted a parallel between the USSR/US Cold War and the present US/China tensions, and labelled the present Beijing and Washington rivalry as the second Cold War.

The crux of Professor Wesley’s address was that both the first and second Cold Wars are underpinned by a technological power race. Economics and ideology are secondary; technology and knowledge create superpowers and reinforce dominance. The ability to understand and manipulate the material world has been the source of power for the last 500 years, and technology continues to be the measure of a country’s sophistication and development.

He submitted that the US prevailed against the USSR as it innovated, developed and commercialised new technologies better than its adversary. Star Wars and the World Wide Web had been decisive. Because the US was technologically superior, its associated systems of government, such as democracy, the rule of law, and free market capitalism, were seen as superior. If the US could achieve technological dominance through a liberal democracy, why not adopt a liberal democracy?

While Australia “drank the kool aid” of US technological and political dominance, China did not. Because technology underpins power and influence, Beijing resisted and continues to resist adopting US technology, as following technological trends consolidates middle-power status. Rather, the Chinese Government prioritises its domestic technology markets, and actively develops strategically important industries such as its energy, biotechnology, material sciences, telecommunications, and large-scale equipment industries.

Chinese President Xi Jinping’s “Made in China 2025” policy spooks Washington by laying out China’s plan for technological dominance. The policy sets targets for China to have 80% of the global market share in electric vehicles, 70% in medical devices and robotics, and 75% in mobile phones. The Chinese Government has boosted research and development funding by 12.3%, and acquired foreign technology and science specialists. Professor Wesley emphasises that there is no question of China’s intent: it aims to be a technology powerhouse and consequently global superpower, which can be seen clearly in its 5G mobile technology lay-outs/contracting within its sphere of influence.

This serious technological competition underpins American paranoia. Heightened technological prowess facilitates the Chinese People’s Liberation Army’s power, and the US is also concerned with China’s neglect of ethical technological development standards and the weaponisation of data. An example of Washington’s paranoia is the 2018 Federal Bureau of Investigation’s testimony to the US Congress accusing American universities of being naïve in engaging with Chinese counterparts for research and innovation. Professor Wesley also notes that the US has put in draconian measures to limit China’s technological developments, including talent export controls and audits against companies collaborating with Chinese entities.

Professor Wesley suggests that some worry about China’s technological intentions is justified in that we are not clear about the extent of the Chinese Government’s ambitions. But he also proposes that the US response has some flaws. For example, the climate change issue is too big and complex for closed research communities, and instead requires a multilateral approach involving both the US and China. He also notes that preventing people exchanges between the US and China undermines US prestige and dominance by cutting US access to China’s best people and limiting the reach of US institutions.

In his concluding remarks, Professor Wesley argued that Australia has clearly sided with the US, evidenced by the ban on Huawei and implementation of export controls of sensitive technologies. However, Australia must be cautious, as China is our second-largest research partner and a significant source of our economic well-being. Professor Wesley left the audience with a particularly grim forecast: the US-China rivalry is set to endure, intensify, and sour. 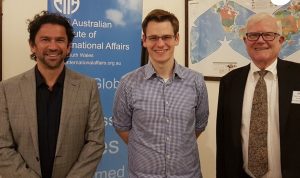