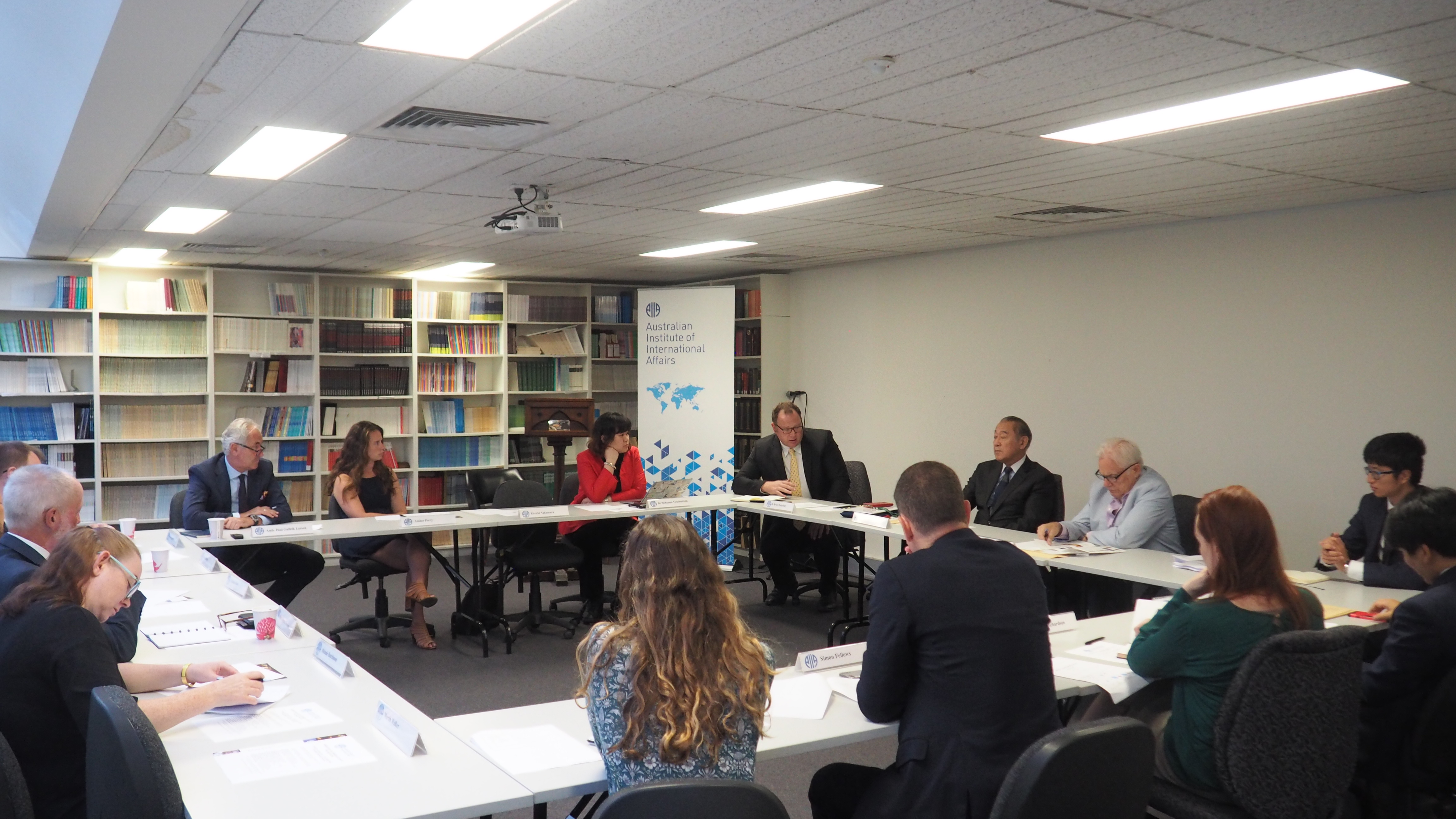 In recent years, the Indo-Pacific has been a seat of contestation, with questions surrounding the United States’ commitment and, contrastingly, growing Chinese influence in the region. In this context, how does Japan, as a stable regional middle power, view such challenges to the order built from the post-war era?

To elaborate on key issue areas in Japan’s longstanding and emerging relationships, and challenges to its role as a middle power in the Indo-Pacific, the Australian Institute of International Affairs in conjunction with the Embassy of Japan in Australia hosted a roundtable at the AIIA national office on 20 January, 2020. The roundtable brought together members of the diplomatic community, the Australian government, non-government and business sectors, and was led by a former Japanese ambassador to the United States, Ichiro Fujisaki. The roundtable was held under the Chatham House rule.

The roundtable began with a discussion of the comparative growth in “power,” discussed in terms of defence spending and GDP (typical measures of “hard” power) in the region. Based on these metrics alone, Japan has grown only slightly over the past three decades, while the United States and China have consistently increased their spending. China has thus cemented its place as the second power in the region, prompting Japan to reassess the current state of play, and its prospects for bilateral relations and partnerships in the Indo-Pacific. In line with its position as a middle power, and a hesitancy towards expressing terms of “power” itself, Japan seeks to exert its regional influence in other ways, particularly in areas such as robotics, though there is scope for improvement in overall product output.

The Indo-Pacific has become increasingly centred on the power dynamics between the US and China, in which Japan must tread carefully in order to best serve its interests in the region. The Belt and Road Initiative (BRI) has become a focal point of Sino-Japanese relations in recent years, with Prime Minister Abe shifting Japanese policy to cautiously support the initiative on conditions of transparency, sustainability, openness, and economic efficiency. Support of the BRI, however, is not necessarily bipartisan. Conservatives in Japan remain wary of this careful embrace, arguing that China is using the BRI to make strategic inroads and advance its territorial claims in the region. Furthermore, given the significance of the South Pacific to the BRI, how does Japan see its relations in this region developing in the immediate future? For one, multilateral cooperation with other middle powers, and bringing South Pacific states into multilateral fora will be a key step moving forward. Fortunately for Japan, it has already been a longstanding partner in the South Pacific.

Territorial disputes in the East China Sea remain a key issue between Japan and China. Deeply entrenched, the outcomes of these disputes are likely to shape how Japan is perceived as a middle power and the nature of the bilateral relationship in the future.

Coinciding with the election of the Democratic Party of Japan to power from 2009, Sino-Japanese relations began to shift from the status quo that had been largely upheld prior, with Chinese encroachment into disputed islands in the East China Sea. In an already-tense situation, the bilateral relationship was further inflamed by the Japanese government’s purchase of islands from a private owner, and Shinzo Abe’s 2013 visit to the Yasukuni shrine. While tensions have eased, it seems likely that Japan will have to navigate the murky waters of the East China Sea with a delicate hand in the future and ask itself how it seeks to hedge against Chinese influence. One mainstream view is that the US should take a strong counterbalance measure to Chinese influence in the Indo-Pacific. While Japan has traditionally maintained positive relations with the US in the post-war regional order, it seeks to affirm its independence from the US in its foreign policy strategy.

Japan’s relationships with the ROK and DPRK are a core feature of the regional dynamic in the Indo-Pacific. While in theory, Japan and the ROK should form a practical partnership as middle powers, the relationship between them has a chequered legacy, with historical tensions still a potent source of anti-Japan sentiment in South Korea. The 1965 peace agreement was developed to normalise relations, with the goal of providing Japanese remuneration to South Korea and a “complete and final” resolution to such issues. Korean opinion, however, frequently maintains that the 1965 agreement does not sufficiently cover previous events. Particularly following Japanese export restrictions to South Korea in 2019, relations have further soured. The roundtable recognised the need for governments to show leadership in mending the relationship. With regards to the DPRK, while the outlook remains bleak, it remains in Japan’s interests to ensure that the US keeps to the status quo. Japan should also ensure that the DPRK remains aware that Japan is willing to extend economic cooperation on the conditions that the situation is normalised on the Korean peninsula.