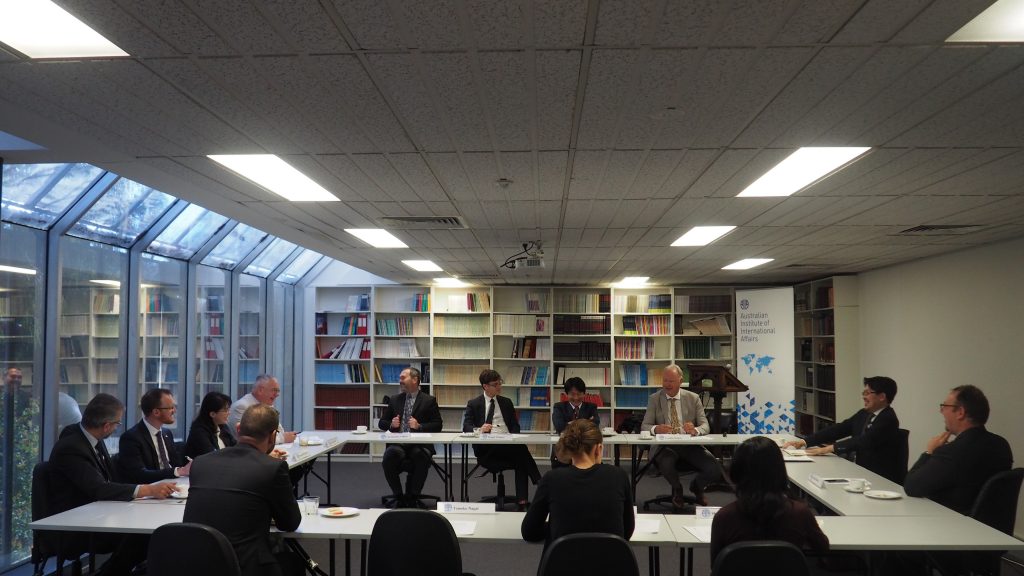 The 2016 referendum that resulted in the British population’s vote to leave the European Union has created geopolitical ramifications not only in continental Europe but also further afield in the Indo-Pacific. Brexit has raised obvious questions concerning what the future holds for relations between the UK and the EU. But perhaps less obvious questions pertain to how Brexit will impact the future engagement of the UK and the EU with the world’s most significant region of economic activity. What would a “hard” Brexit or a “soft” Brexit mean for the future of UK/EU engagement with the Indo-Pacific? To discuss this issue, Dr Michito Tsuruoka from Keio University in Japan held a roundtable at the national office of the Australian Institute of International Affairs to assess how Tokyo is preparing for contingencies for either a “hard” or “soft” Brexit. He noted that the Japanese government’s view on Brexit is chiefly focused on economic factors and particularly on how Japan will reassess its commercial entry points into the EU single market through other European capitals such as Berlin, Paris or Amsterdam. Japan also has concerns regarding how Brexit will shape the UK’s and the EU’s future political and security engagement with the Indo-Pacific in the face of China’s rise and its attendant rivalry with the United States.

To discuss the Japanese perspective on Brexit and the challenges that accompany it, the roundtable brought together members of the foreign diplomatic community and the Australian government. The roundtable was held under the Chatham House Rule, except for opening remarks by Dr Michito Tsuruoka.

The roundtable opened with discussion on how Japan perceives Britain’s ability to pursue its own trade relations outside the EU and how this will affect trading relations between the UK, the EU, Australia and Japan in the Indo-Pacific. Given that the UK will be permitted to pursue its own trade deals with other nations, the potential for it to join the Trans-Pacific Partnership (TPP) has been flagged as an opportunity for the UK to go out on its own and pursue its renewed agenda of a “global” Britain. Despite the positive overtures coming out of Whitehall, Japan has a different view. Depending on whether London maintains close economic ties with the EU moving forward, a UK trade agreement with the TPP could be problematic if the UK undergoes a “soft” Brexit where its trade relations remain closely attached to the single market. In Tsuruoka’s words in his recent article in the Diplomat, “London’s ability to conclude free trade agreements (FTAs) with the other [TPP] countries will be severely constrained.” Tokyo hopes that UK trade policy will remain closely aligned with the single market, given that the market access of Japanese companies relies heavily on London as an entry point to the single market.

If the UK undergoes a “hard” Brexit, what would potential trade partners in the region such as Australia and Japan hope to obtain from a trade deal with a renewed “global” Britain that has shaken off the apparent yoke of EU trade strictures? Some Australian officials were optimistic about Australia’s position as first in line for a free trade agreement with the UK—although there may need to be some sequencing between Canberra, London and Brussels on potentially overlapping trade provisions. But there are also uncertainties. What should countries in the Indo-Pacific expect from the UK in terms of the types of regulations and export accreditations standards that will be adhered to in any future trade agreements with the UK? Some believe that various independent agencies in the UK are responsible for setting standards and these same agencies retain a solid institutional basis in the UK – underscoring the point that any future standards are unlikely to differ markedly from existing ones.

From Japan’s perspective, if the UK makes a hard break with the Union – thereby hindering Tokyo’s economic access to the single market – the commonly held view in Tokyo is that Japan should try to extract greater trade concessions from a post-Brexit Britain, which would likely find itself slightly more isolated and in need of old friends who will demand a higher price for continued friendship. Japan’s refusal to sign the trade and continuation agreement, which mirrors aspects of the EU-Japan Economic Partnership Agreement (EPA) with the UK, signals that Tokyo won’t take a chance on a potentially bad deal. For Japan, the market size of economic blocs is a key variable when it comes to considering trade agreements, and this is particularly acute for agreements surrounding high quality infrastructure and connectivity projects. Tokyo is eager to preserve its position as the EU’s principal partner in the Indo-Pacific on projects such as the Blue Dot Network, which forms part of a broader strategy to counter similar projects contained in China’s Belt and Road Initiative (BRI).

What does the future hold for the UK and the Union’s strategic engagement in the Indo-Pacific? Tokyo is keen to pursue closer bilateral ties with France and Germany, however there are some lingering concerns regarding Europe’s alignment with US policy when it comes to countering the threats posed by the rise of China. Japan is waiting to see how a post-Brexit UK will influence the way the Union engages with the region and China. Tokyo is apprehensive that Brexit would set a dangerous precedent for future division among the EU Member states – thus undermining the European Commission’s efforts to develop a unified foreign policy to offset the threats posed globally by Russia and China. Depending on the how a post-Brexit UK will influence the EU policy in the region, Germany was discussed as a favourable alternative candidate to enhance the EU’s presence in the region, but Berlin would have to develop a much more visible presence. From Tokyo’s standpoint, Brussels still has a way to go toward improving its consistency when it comes to engaging China in the region – a point on which the US is viewed as a more predictable actor. The EU’s willingness to preserve free-trade agreements with China risks stymying EU Member States’ efforts to encourage strategic engagement with Japan vis-à-vis China. Consequently, it is in Japan’s interests that a post-Brexit UK maintain as much strategic alignment as possible with the EU when it comes to its engagement with the Indo-Pacific. Ultimately, Tokyo views Brexit as a litmus test for determining the extent of the rest of the EU Member States’ political will to influence the EU’s foreign policy outlook in the Indo-Pacific.

The ongoing joint military exercises between the UK and Japan show reassuring signs of Britain’s future commitments in the region. The key for future engagement will be whether a post-Brexit UK can still garner substantive commitments from its European counterparts on strategic alignment in the region. Closer alignment between the two would reduce pressure on Tokyo’s part to balance separate channels of dialogue between both parties. On Australia’s engagement with a post-Brexit UK in the Indo-Pacific, participants thought that a prospective free-trade agreement with the UK would be an opportunity to emphasise the virtues of free trade in the face of the global headwinds of economic protectionism. The roundtable concluded by discussing how Brexit will impact climate change policy in the region. To achieve policy cohesion, the UK and EU must maintain as much collaboration as possible on policy standards and emissions reduction targets.