On Tuesday 26th July, AIIA NSW hosted Ms Jennifer Matthews, president of the Australia Indonesia Business Council (AIBC), at Glover Cottages. With an extensive diplomatic career in the Asia-Pacific region (specifically in Indonesia) and experience in a range of Commonwealth and State trade roles, Ms Matthews was able to provide an insight into the growing opportunities for Australian  businesses in one of Asia’s fastest growing markets.

With a stable democracy, an interest in diversifying its international market, a rising middle class, a predicted economic growth of 5 per cent in 2023 and an economy which is projected to be the fourth largest in the world by 2045, it is an imperative for both the Australian private and public spheres to take a second look at the Indonesian business market. The Indonesian government itself is showing clear signs of encouraging foreign investment by introducing reforms, including the Indonesian Australian Comprehensive Economic Partnership  Agreement (IA-CEPA). This is favourable to Australian investors, particularly in the technology, education, agriculture, health care, energy and tourism sectors. Prime Minister Albanese’s visit to Indonesia soon after taking office boosted the positive trade and investment climate.

With its relatively young population, Indonesia has cultivated an entrepreneurial workforce that has already produced the eighth largest concentration of “unicorns” (start-up companies that have a minimum valuation of $1 billion and are privately owned). Indonesia’s inevitable economic rise is a sterling opportunity for Australian businesses to diversify and break into a 270 million strong market that is actively encouraging foreign investment. This could not only bring the two nations closer together through economic ties but also act as a stabilising alliance in the Asian-Pacific region.

In response to questions, Ms Mathews said that Indonesia is pursuing a diverse range of foreign investment and has close ties across the Asia-Pacific with nations including China as well as the USA, Japan, Australia and South Korea. As a vital leader of ASEAN, it also has close ties to its neighbours. It sees itself as a stabilising force in the region rather than focusing on particular alliances.

Asked about corruption, she said this was a problem in many countries and needed to be addressed, for example through training programs  and government-to-government dialogue. Businesses facing problems could draw on DFAT and Austrade expertise and use networks such as the AIBC and its Indonesian counterpart. It was important to understand the key role both of the armed forces and of large family conglomerates in the Indonesian economy.

On our current and future relationship with Indonesia, Ms Mathews described Australia as widely held in high regard in Indonesia, dating back to support for their independence and entrance into the United Nations. She acknowledged that this relationship has at times been fragile, but emphasised that it has enormous potential: the Indonesian government is extending its hand to us and prioritising our investment into their country. Recent foreign policy changes with our new government, plus the continued efforts of the AIBC, are strengthening the relationship.

She agreed that increased immigration from Indonesia would strengthen our mutual understanding and productive practical links. Currently, the Indonesian community in Australia, at around 100,000, is disproportionally small: we are missing out on considerable human resources and skills. 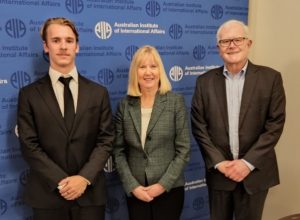