On Tuesday 19th April 2022 the AIIA NSW interns debated the proposition “that India’s strategic interests make it an incompatible member of the Quad”. The affirmative speakers were Rebecca Zhang, Drew Beacom and Sachin Khunte. The negative case was put by Jacqueline Michalopoulos, Emily Shelley and Victor Liang.

The affirmative team focussed on India’s historical role in international affairs as a non-aligned country championing the interests of the Third World. Its security concerns centred on Pakistan, and to a lesser extent China, and its substantial reliance on Russia for military supplies and for crucial energy and other imports was incompatible with the strategic approach of the other Quad members: Japan and Australia were in long-standing alliances with the United States, while India and the US had often been critical of each other’s international positions. India remained committed to independence and nationalism, and had its own goals which had often been inconsistent with those of the United States and its allies.

The Quad’s strategic unanimity had collapsed at the first challenge, with India refraining from criticising Russia over its war on Ukraine and from joining in sanctions on Russia. While Australian strategists say that the Quad’s focus is not only on military capacity, the fact was that its real strategic target was China, with which the US was engaged in a fundamental rivalry for global strategic and economic dominance. India’s relationship with China was more nuanced, involving sensitive border issues and substantial economic links.

The negative side argued that India’s value as a Quad member lay in its capacity to contribute diversity to strategic debates. There was no reason why the Quad’s fundamental objectives should be damaged by disagreement and dissent within its members from time to time. On Ukraine, India’s fundamental security and economic interests required it to focus on mitigating the cost to the Indian economy of sanctions on Russia. But these differences should not be overblown: the compatibility of the Quad membership was not impaired by the existence of a range of views. Contesting China’s power projection, for example through its Belt and Road initiatives, was more important to all of the Quad members than challenging Russia.

Within the Quad, India offered a distinctive contribution on non-traditional security interests: it was at the forefront in combatting Covid and climate change and preserving the international rules-based order, and was a global leader in vaccine production, biotechnology and artificial intelligence. The Quad should not be seen as a security pact in a narrow military sense, but as a strategic grouping which brought together a more extensive range of interests favouring international stability and security.

The adjudication was given by Dr Bob Howard, senior AIIA NSW councillor and University of Sydney international relations and history analyst. He noted that the negative side had offered an important conceptual analysis of the Quad as not just a military-focussed security grouping. They had argued persuasively that, in this context, the significance of Ukraine responses receded: the fundamental issue of dealing with China’s international expansion was more important to all parties, and was fully shared by India. India’s history of independent international positions was an asset to the Quad. The affirmative side had not responded effectively to this argument.

In this light, Dr Howard awarded victory to the negative side, by a narrow margin. He praised the eloquence, the thoughtful, well-researched content and the excellent coordination of each team. 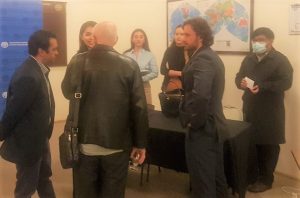