Legitimacy is the most important, and it overlaps with all the other drivers. This doctrine seeks to uphold the CCP’s survival and is directed at both foreign and domestic audiences. The narrative it creates is that the Party is central to, and necessary for, China’s development and emergence as a global power. While the CCP’s legitimacy has been accepted at home, it has failed to gain traction abroad.

Sovereignty means maintaining the indivisibility of the Chinese state. This means securing favourable outcomes in territory and sovereignty disputes, such as those in Tibet, Taiwan, Hong Kong and Xinjiang. It aims to minimize reliance on the outside world and involves the use of military, economic, and diplomatic instruments to achieve these ends.

Wealth links with legitimacy and power. China’s economic growth is seen to indicate its success. But its export-oriented model depends on its active role within the global economic system. This has conflicted with criticism from other major powers of China’s internal and external policies. It has also driven Beijing to promote self-sufficiency through projects such as the Belt and Road Initiative and Made in China 2025. Managing this contradiction is one of Beijing’s major foreign policy challenges.

Power means coercive or “hard” power. This involves a carrots-and-sticks approach with inducements and punishments in the internal economic sphere, extending even to private actors and companies. In its international dimension, achieving the right balance is difficult: miscalculations are likely to generate pushback, for example in the Taiwan Strait.

Leadership means the ability to shape global norms. Beijing believes the rules of the “rules-based order” were written by the West. It thus looks to increase its influence over international organisations, playing an active role in such bodies as the UN Committee on the Peaceful Uses of Outer Space. At the same time, China has set up parallel structures outside of the Western-led framework.

Finally, ideas means gaining international “narrative power”. This involves “telling China’s story to the world” and portraying China as a legitimate source of knowledge and solutions to global problems. While it has not yet succeeded in this objective, Beijing has largely succeeded in dampening criticism, especially of its human rights record.

Dr Gill concluded by arguing that the CCP has staked its legitimacy on pursuing these objectives. It will continue to do so even if this causes friction with the West. This is what “daring to struggle” means.

Ergo, the only real solutions are for the West to try and understand China’s perspective, prepare for ideological and strategic competition, de-escalate by seeking common ground wherever possible, and welcome China’s increasing wealth and power if that leads to a China that is stable, just and resolved to settle its regional and global disputes peacefully.

During questions, Dr Gill was asked about the extent to which his book was about the personal role of Xi Jinping in shaping China’s foreign policy. He replied that he did not set out to write a book about Xi, but the facts led him to conclude that Xi’s role has been crucial. This is partly due to Xi’s personal philosophy and actions. But it is also a function of the expectations projected onto him by the party apparatus. Xi’s power and that of the party are inextricably linked.

Bates was also asked whether a war between China and the West is unavoidable, and how the party’s narrative affects its relations with the Global North and South. He answered that the risk of war is at its highest level since China’s reforms began, and that tensions will probably continue to escalate. Beijing’s relations with the Global North are also complicated by its preoccupation with maintaining party legitimacy above all else. Even so, China’s challenge to Western hegemony, and its rapid economic growth, have helped it gain legitimacy in the Global South. 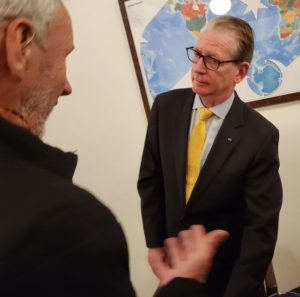 Dr Gill in discussion with audience members following his talk