On Tuesday 13 November, Associate Professor Matthew Sussex, Academic Director at the National Security College at the Australian National University, engaged the Institute’s audience in a lively presentation addressing the negative impacts of cyber propaganda on politics and social cohesion and the tendency of governments to over-securitise the cyberspace.

Dr Sussex synonymised propaganda to a soft power issue, characterised by falsity conditioning and the manipulation of people’s opinions through cyber platforms. Propaganda is not a new issue: propaganda was used by ancient and contemporary governments whether for political or apolitical purposes. Banners and posters incorporating slogans were widely used by government during wartime. Propaganda, however, has evolved in both form and complexity with the development of technology and the pervasiveness of internet use. Prof. Sussex introduced the 5 V’s of big data which succinctly encapsulated modern-day propaganda. Specifically, technology now allows anyone including both state and non-state actors (voice) to produce and disseminate large amount (volume) of untruthful (veracity) information quickly (velocity) in a range of different formats (variety) in the unregulated cyberspace.

Dr Sussex explored and emphasised fake news as a cost-effective, efficient but destructive form of propaganda. Fake news can be defined to be hoaxes which are published for money (manifested in the form of click bait) or for political motives by distorting facts, causing public outrage or eroding collective ideals or support. There is a tendency to believe fake news: psychological research demonstrated that fake news can be more influential than objective truth as it appeals to emotions. This is especially the case when fake news is presented with catchphrases and accessed in time-constrained circumstances.

The process of creating fake news requires the propagandist to ‘seed’ in his audience a positive image of themselves or a negative image of the target, then ‘propagate and prune’ to achieve the expected confusion or misunderstanding in the public. In the cyber age, fake news can easily succeed due to the low cost of production and dissemination and its viral nature. The wide range of agents that fake news can be channelled through (diaspora populations, fringe media, NGOs, protest movements, political parties, ‘useful idiots’ or Baptist/Bootlegger coalitions… to name a few) and the deficient regulatory mechanisms are also deciding factors allowing large-scale impacts to happen with very limited or even no consequences on the propagandists. 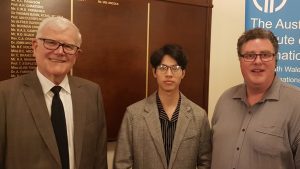 Dr Sussex identified some key solutions for governments to combat social engineering as a conclusion to his presentation. Governments should have an appropriate response to propaganda and avoid over-securitising cyberspace by not magnifying the threats. Multi-faceted and adaptive strategies with a light regulatory touch should be implemented; people need to learn to see through digital propaganda for themselves. Beyond defensive measures, counter-messaging should be performed if considered necessary. Governments should be responsive, but patience is also important since a successful defence from propaganda, just like any other security issues, will take a long time and will rely heavily on the resilience of civil society.