On Tuesday 15th October, AIIA NSW welcomed Dr Jonathan Symons from Macquarie University to speak about the need to accelerate the global pace of technological innovation in response to climate change. Drawing on his new book Ecomodernism: Technology, Politics and the Climate Crisis, Dr Symons detailed the potential of state-sponsored low carbon technology innovation to address the challenges that international society faces due to climate change.

Dr Symons began by explaining the ecomodernism manifesto published in 2015 by a group of American and Australian academics from the Breakthrough Institute. Ecomodernists argue that in order to de-carbonise we need a fundamentally new set of technologies to power our economy and mitigate our impact upon the climate. Ecomodernists consider states as the only actors with the capacity to drive this technological innovation. Likewise, human society must be concentrated in more densely-populated urban centres, where our environmental impact upon the planet is more focused and limited rather than be spread across all corners of the earth.

Climate change, Dr Symons pointed out, presents a wide variety of serious threats to Australia’s security, economy and politics. To alleviate the effects of climate change, individual action is insufficient; national governments need to promptly address what can be considered the most challenging public policy of our time. Since the leadership of the Rudd government in 2007, successive Australian governments have failed to prioritise climate change in national politics, despite it being one of the international community’s gravest concerns. No country signatory to the 2015 Paris Agreement is on track to meeting its pledges, which themselves are only a step in the path to achieving meaningful climate change reversal.

Australian domestic public opinion is highly concerned about climate change, yet the structure of our economy means that we continue to be a huge emitter. Coal is currently the country’s number one export, with natural gas and crude petroleum also in Australia’s top ten exports. Shifting to non-carbon technologies, as proposed by ecomodernists, would not be an easy task.

Climate change is a result of global actions, so there needs to be a global response, rather than just a national response. A proposed solution of ecomodernists is to develop non-carbon technologies, including utilising nuclear and solar energy. No country had achieved zero emissions without nuclear or hydro generation as their base. Such policies would not be popular, a problem which has plagued meaningful environmental policy in recent decades.

De-carbonisation will be an extremely difficult task as the technology that enables human development is what simultaneously causes climate change. In their recent election campaigns, India’s Narenda Modi and Indonesia’s Joko Widodo both campaigned with the promises of expanding their countries’ electricity generation in order to give more people access to the benefits of modern life. Their energy sources include coal, alongside renewables. In this light ecomodernists cannot see a future where the use of coal is completely eliminated; it is simply not feasible. Consequently, to suggest that the world must immediately do away with carbon energy is to fiddle while Rome burns.

Dr Symons identified the 1988 Toronto Conference on the Changing Atmosphere as a catalyst for realising human society’s unintentional destruction of our environment. He noted that since the Conference, global greenhouse gas emissions have risen by approximately two percent per year. Since 1988, there has simultaneously been a slow decrease in innovative research. Our response to the climate crisis has not been to seek non-carbon energy solutions, and there has been a historic low interest in innovation in these fields, such as hydroelectric energy. A reason for this is that the advantages of non-carbon innovation are not generally economic benefits, but produce positive externalities, making them politically unpopular. However, echoing the recent speeches of Greta Thunberg, there exists the need to create neo-carbon technologies that do not exist yet, and the skill set in facing the current climate crisis needs to be vastly widened. There is no silver bullet in addressing climate change, society should adapt to and mitigate its effects as best it can.

The Q&A period was lively and engaged, as audience members challenged the notions central to ecomodernism, including the endorsement of nuclear energy. One such challenge is putting the nuclear energy debate back on the agenda, and whether it would be wise or feasible to do so, with events such as Chernobyl and Fukushima still fresh in our collective minds. The audience agreed that state actors should be investing more in innovation, and questioned what form this would take, and the role of non-state actors. 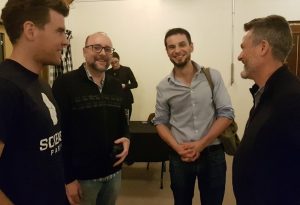