On Tuesday 14 August, the Institute welcomed associate professor Dr Jinghong Zhang from the Centre for Social Sciences at the Southern University of Science and Technology in Shenzhen, who shared her insights on wine consumption in China – specifically what influences shape Chinese wine culture, how Chinese people perceive imported wine and what symbolic values are attached to foreign wine.

Statistics provided by Dr Zhang show that China is now the largest consumer of wine globally. Dr Zhang noted that the Chinese wine market is dominated by domestic products rather than imported wine. However, imported wine is considered to carry symbolic values that represent wealth or class. As a result, foreign wine is more favoured by residents of top tier cities such as Shanghai or Beijing for important networking events while domestically-produced wine attracts its buyers from regional areas and the less wealthy.

Australian wine exported to China is highly-regarded as being of superior quality, second only to French wine. According to Dr. Zhang, the positive image of Australia in the Chinese public eyes has partially contributed to Chinese consumer’s preference for Australian wine. Australia is benefiting greatly from this: we are now the second biggest exporter of wine to China.

Dr Zhang went on to analyse the demographics of Chinese wine consumers. Dr Zhang noted that most of the people she met during her research were young people who belong to the newly-emerging ‘middle-class’. She herself believed that the term is controversial in the Chinese context. Who in China belongs to the ‘middle-class’: someone rich but uneducated or someone not very rich but educated? Dr Zhang identified three values that are attached to wine by this class of consumers: health, cultural and tasting values. Dr Zhang also acknowledged problems with Chinese wine culture: concerns about food match, fake wine, and lack of education on wine. 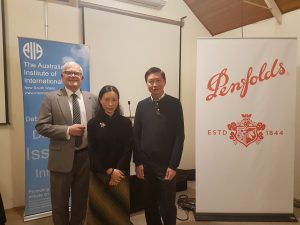 Dr Zhang concluded by noting the impact of cultural understanding on food consumption and the acquisition of taste as two factors that will potentially contribute to increased wine consumption in China. She suggested that better understanding of a foreign culture, including wine, makes people more accepting of new things. And taste, including a taste for wine, is not innate but acquired through training.

In response to questions, Dr Zhang expressed confidence that cooperation between Chinese and Australian wine makers will rise, based on her observation of the marriage of Penfolds and Chinese Baijiu and other wine companies adopting calligraphy and other Chinese practices in their marketing strategies.