Pakistan is well-known for being located in one of the most consistently tumultuous and fractious regions in the world and it will be interesting to see how newly-elected Prime Minister, Imran Khan, will tackle the challenges facing the country. On Tuesday 28 August, the AIIA (NSW) was provided with insight into the challenges Khan faces by Dr Zahid Shabab Ahmed, Research Fellow at Deakin University.

Dr Ahmed begun with a brief summary of the reasons Imran Khan and his party, Pakistan Tehreek-e-Insaf (PTI), were elected now rather than earlier in his political career. His charisma and strong populist approach appealed to many across the nation, particularly toward the demographic under the age of 30 who make up a highly significant percentage of the population, with many being unemployed and under-educated and longing to see change in the country away from the two historically established major parties. Despite his well-known playboy reputation, Khan was described by Dr Ahmed as fundamentally being a conservative – a “mullah in civilian clothes”.

Imran Khan also enjoyed the support of the military which has always maintained a significant influence over every aspect of the country.

Khan was also able to benefit from the corruption charges that sent the former Prime Minister Nawaz Sharif to prison and his campaign promised to ameliorate corruption. However, opposition parties had genuine concern about election rigging due to the military’s involvement – an issue which Khan must carefully navigate in the face of any other corruption issues. Other major domestic problems Khan faces revolve around the Pakistani economy, which is in deep crisis. In order to keep his promises of human and social development Khan needs resources, approximately 12 billion dollars. Also hampering potential development is that Khan does not have a majority in the upper house which will mean passing laws will be very difficult.

A key goal for Khan is establishing a pro-Pakistani government in Afghanistan. Bringing the Taliban back to Kabul is in line with the military’s position and would diminish India’s influence. Khan has a relationship with the Taliban and has spoken about engaging them in dialogue, a position that his opponents have derided with the nickname “Taliban Khan”, though the US has recognised this as an avenue for settling outstanding issues in the region. However, this approach has hurt any potential positive relations with India. Khan has not helped by already ignoring Iran. China and Saudi Arabia’s are Pakistan’s only friends in the region and reducing Pakistan’s isolation will be another one of Khan’s great challenges. 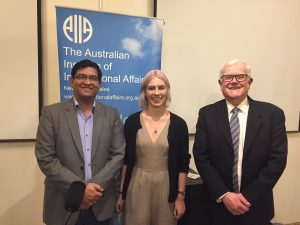 Questions from the audience focused on Pakistan’s nuclear capability and how it is affecting its relationships, particularly with India. Dr Ahmed responded that there isn’t a lot of knowledge about Pakistan’s capabilities as the military tries to keep it fairly secretive. It can be argued that Pakistan’s nuclear weapons have increased its security and that nuclear deterrence has had a moderating effect on the tensions between Pakistan and India. Since acquiring nuclear capability there has been no major wars between the two nations.

Overall, Imran Khan faces numerous challenges and Dr Ahmed’s prognosis is that he is unlikely to achieve many of his campaign promises in his first term considering the current state of the country’s economy, a hostile Senate and the isolation it faces in the foreign policy sphere.