On Tuesday 22nd October, David McCredie, CEO of the Australian-British Chamber of Commerce, spoke to AIIA NSW about the path to Brexit, its evolution since the referendum and the possible outcomes for the October 31 deadline.

The United Kingdom’s membership in the European Union (EU) had been on the political agenda for the past ten years, spearheaded by the UK Independence Party (UKIP). Prime Minister David Cameron’s decision to include a referendum on the UK’s membership to the EU in his 2015 election manifesto was originally designed to draw UKIP back to the Conservative fold.

This ultimately led to the victory of the ‘Leave’ campaign and Brexit in 2016: following his 2015 victory, Cameron was obliged to hold the referendum, which was repeatedly painted as a ‘once in a generation opportunity’, with all major politicians stating they would respect the outcome of the vote. Mr McCredie noted that the wording of the referendum itself was problematic, by giving voters only the option to choose either ‘leave’ or ‘remain’. He cited Australian ex-Prime Minister John Howard’s 1999 republic referendum as a model from which the Brexit referendum could have benefited by offering three alternatives: a no deal exit, exit with a deal, and remain. This might have produced a different outcome.

Furthermore, Theresa May’s tenure as Prime Minister responsible for negotiating Brexit had placed Britain in a weak position, as she had been part of the Remain bloc. Her resistance to a ‘No Deal’ further diminished her sticks at the bargaining table – it meant the EU was under no pressure to make concessions. Her successor as PM, Boris Johnson, had to work with a coalition in which he relied on the northern Irish Democratic Unionist Party (DUP), making him reliant on a pro-EU party to form a Brexit deal. Proposals for a customs border between northern Ireland and the Irish Republic, and now the proposal for a sea border between Ireland and the UK, continued to be one of the largest issues in the Brexit deal.

Mr McCredie noted that one of the challenges of negotiating Brexit is that, technically, the EU cannot negotiate Free Trade Agreements (or any other agreement) with the UK as it is still a member of the Union. The two sides can only write a future agreement that is non-binding, making negotiating the UK’s withdrawal increasingly muddy.

In more recent times, the Boris Johnson era has meant that a ‘No Deal’ Brexit has become a possible option again, despite the UK parliament repeatedly stating they would not accept a ‘No Deal’. This past Saturday (October 19) Johnson introduced a new Brexit deal to parliament. It was the first time since the Falklands crisis that British Parliament had sat on a Saturday. At the time of Mr McCredie’s address, it remained to be seen how the fractured British parliament would choose to vote on the new deal. Mr McCredie offered three possible paths for Brexit: 1) a deal; 2) revoking Brexit entirely; and 3) no deal. He considers a Brexit deal to be the most likely option, and no deal to be the most unlikely.

In question time, audience members were interested in the possible ways in which UK’s withdrawal from the EU would affect Australia’s trade with the UK and Europe. Mr McCredie noted that it was not possible to negotiate a new trade agreement with Britain while it still remained part of the EU, though the September visit to Australia by the UK’s international trade secretary had added to the groundwork. The prospect was for Australia to do better in a bilateral deal with Britain than had been possible in dealing with all 27 Europeans.

The financial state of the EU without the UK’s financial contribution was raised, an element which has not been covered much in the media. The possibility of a second referendum was also discussed. Whilst this might become an option, it would add to the fissures in a UK which is already deeply divided. If the vote was again in favour of leaving, Brexit negotiations would simply continue. However, if the result was to stay, what would be the next step? 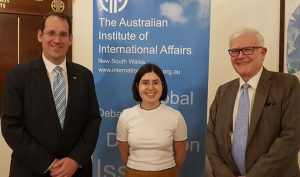