On Tuesday 27th August, AIIA NSW welcomed Deborah Barros Leal Farias to discuss Jair Bolsonaro’s administration of Brazil since his inauguration in January of this year. As a native Brazilian and a professional in politics and international relations, Deborah assessed Bolsonaro’s tenure against ongoing national social struggles and his place in the wider context of global politics.

Brazilians voted in 2018 with a yearning for change. The ongoing investigation into endemic corruption within the highest levels of office, known as Operation Carwash, has diminished the people’s trust in their government. That Bolsonaro was able to present himself as an ‘outsider’ with the power to challenge the status quo, Deborah argues, gave him the advantage needed to win the election.

Evaluation of his presidency has been widely disputed within Brazil. The left and right divide has transcended the usual boundaries of political discourse: conservative groups are visibly separate from those holding more progressive values. Polarity exists even within established factions of society. Evangelicals have labelled the Catholic church as ‘leftist’ and even the Economist and Forbes magazine have been deemed ‘communist’.

Social media has epitomised these opposing views of Bolsonaro. Memes can be found of him portrayed as the country’s savior; at the same time the ‘Ele Não’ (‘Anyone but Him’) images circulate the internet. Nation-wide communication through WhatsApp has claimed to substantiate fake news as ‘facts’ validated by attribution to family members or friends. Deborah suggested that YouTube has enabled ‘the radicalisation of Brazil’.

The two defining aspects of Bolsonaro’s administration are his inclination towards the US and his domestic policies affecting the Amazon rainforest. In foreign policy, his affiliation with the US has been driven more by an admiration of Donald Trump than a genuine attempt to strengthen bilateral ties. That Bolsonaro is backing one of his sons for appointment as Brazil’s ambassador in Washington is a telling display of his superficiality.

Bolsonaro’s attitude towards the Amazon is another controversial aspect of his administration. Given that the Amazon amounts to two-thirds of Brazilian territory – or, for comparison, three-quarters of Australia – the 84% increase of fires in the region over the past year has huge implications. Although this figure is influenced by the dry season, Deborah asserts that it is largely due to a lack of regulation and enforcement implicating those who illegally clear the land for agri-business.

In question time, one audience member queried why Bolsonaro had refused the offer of $22 million from the G7 at its latest summit to combat the fires when he had complained of a lack of resources not long before. Deborah responded that this was a very expensive act of pride, fuelled by the perception of the help on offer as hypocritical and self-serving – an implied criticism of his government and a threat to Brazil’s sovereignty. Deborah reassured the audience that management of the fires is possible through political resolve: the period 2004-2012 saw a significant decrease in the number of fires.

Another audience member asked what would become of the discredited Workers Party (PT). Deborah said reform of the PT may depend on distancing itself from the controversies and corruption associated with former president ‘Lula’. This strategy could unravel next year when elections for mayors take place in Brazil.

To conclude, Deborah presented a poll that is a fairly illustrative of Jair Bolsonaro’s presidency. The beginning of this year revealed a 28.2% disapproval rate of his governance. This month, the rate stands at 53.7%. 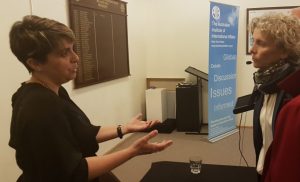