On 10 July HE Wahidullah Waissi, Ambassador of Afghanistan to Australia, addressed the Institute on what the future holds for Afghanistan. He commented that, despite Afghanistan having over 5000 complex years of history, it is quite a young country in terms of population with over 65% under the age of 25. Education is a major recipient in the budget; post 9/11 many institutions have been built, including universities, and the quality of education is a major current focus.

Geography is key to understanding Afghanistan’s challenges. As a landlocked nation it is dependent on other nations to reach the sea. Its immediate region is full of potential for cooperation and connectivity that could help Afghanistan’s economy thrive. Substantial networks of road, rail and pipeline communications are in place or under consideration potentially linking Afghanistan with Pakistan, India and Iran. Afghanistan also has important economic and strategic relations with Turkmenistan, including a gas pipeline and a thermal electricity pipeline.

Confidence building measures are a significant factor that will contribute to building relations in the region. These include the Heart of Asia Process, the Regional Economic Conference on Afghanistan (RECCA) and China’s One Belt, One Road (OBOR) project.

However, progress is dependent on regional relations; for example, last year many issues arose when trying to work with Uzbekistan, whereas this year due to the change of government there it is now one of the friendliest neighbours. There is also the issue of the impacts of climate change on an already dry nation whose major rivers spur outwards, creating vulnerability in managing the region’s water resources. 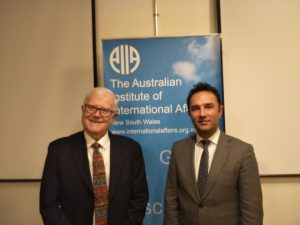 Since 9/11 Afghanistan has become fully recognised by the international community, with many countries (including Australia) engaged inside the country and assisting its development. Afghanistan’s current foreign policy is based on the ‘Five Circles of Foreign Policy’ focused on the six neighbouring countries (including India); Islamic countries; US, EU, Australia and NATO countries; Asian countries; and international organisations. International terrorism is a serious and dangerous issue for Afghanistan: there are still 12,000 foreign troops inside the country, a number which may increase.

For 48 years Afghanistan has had a political relationship with Australia, and currently seeks to develop this relationship bilaterally and not as a sub-set of US strategic policy, creating a relationship that will see engagement between people, parliaments and business.

During question time, audience members raised the importance of dialogue on regional transportation, particularly railways, and the impact of security issues on this process. The representation of women in government was also addressed: Ambassador Waissi noted that women make up almost 25% of the Afghan parliament. The need for Australian soldiers to remain in Afghanistan, and the impact of their training on Afghan troops, was questioned.