Apply for an internship with AIIA NSW

Applications for the Semester 1 2021 (February-June) internship program are now open! 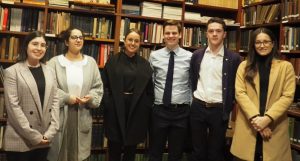 Internships at AIIA NSW are offered to university students or recent graduates who have an interest in international affairs, and who are looking to further develop their skills for future professional involvement in international policy. AIIA NSW internships are highly competitive and previous interns have found employment in Australian Public Service graduate roles, think tanks, not-for-profit organisations, business, law and academia.

Interns must be available to assist during events which are usually held on Tuesday evenings at Glover Cottages in Sydney, and may need to allocate additional time to complete research and administrative tasks. Interns are expected to:

Knowledge and prior experience with professional audio-visual equipment, social media management, online marketing and hosting webinar events through applications such as Zoom are highly desirable.

Applications for internships are welcomed during the following period:

Applications should be emailed to nswinternships@gmail.com, with the subject “AIIA NSW Internship Application – Your Name”, and must contain:

Please collate all documents into a single PDF attachment.

Shortlisted applicants will be asked to attend in-person interviews. 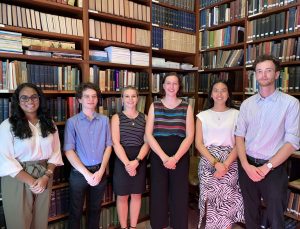 Wendy Hu is a fourth-year student at the University of Sydney studying a Bachelor of Commerce and a Bachelor of Laws. She has previously interned at the United States House of Representatives, a tech corporate advisory firm and Ernst & Young. Wendy is particularly interested in the international financial system, US politics and foreign policy, as well as the different conceptualisations of democratic institutions more broadly.

Evangeline Larsen is undertaking her final semester of a dual degree between Sciences Po university in France and the University of Sydney majoring in Middle Eastern and North African studies, French and International Relations. Last year Evangeline participated in the APRU (Asia Pacific Rim Universities) Undergraduate Leadership Program in Oregon, USA for two weeks which focused on the nexus of public health, environment and social inequality on a global scale. She is particularly interested in Lebanese politics and the complexities of the recent global anti-neoliberal protest movements.

Nimaya Mallikahewa is in her fifth year of a double degree in International Studies, majoring in International Relations, and Media (Public Relations and Advertising) at the University of New South Wales. She is currently the executive editor of Politik, the student-run UNSW International Affairs Review. She served as a Speakers’ Director for the inaugural UNSW ASEAN Conference in 2019 and interned at the Lakshman Kadirgamar Institute of International Relations and Strategic Studies in Sri Lanka. Nimaya’s research interests include international development aid with a focus on South Asian development, Sri Lankan and Australian foreign and security policy, transitional justice, and maritime security.

Marcus McCulloch is undertaking Honours in Political Economy at the University of Sydney, writing a thesis on the industrialisation of the Soviet Union. He completed a Bachelor of Arts (Languages) in 2019, majoring in Political Economy, and Spanish and Latin American Studies. Marcus has been a recipient of several university scholarships and awards, including the 2017 Dean’s List of Academic Excellence, and spent a year on exchange in Madrid, studying world history from the Iberian perspective. He is also a keen debater, and recently reached the finals of the World Universities Debating Championship in Bangkok. He is interested in the fate of democracy in the 21st Century.

Thomas Shortridge is undertaking his Bachelor of Arts honours year in Government and International Relations at the University of Sydney. He has previously interned at the United Services Union and currently oversees the New South Wales Debating Union. As a debater himself, he has been a semi-finalist at the world championships and a top 10 speaker at the Australasian championships. His research interests focus predominantly on comparative politics, African politics, authoritarian regimes, and democratic transitions.

Nicole King has recently graduated from a double degree in Arts (Government and International Relations, Spanish and Latin America Studies) and Economics (Environmental and Resource Economics) at the University of Sydney. Nicole’s main interests are in environmental politics and international security, and in particular how those two areas intersect and relate to one another. Having previously interned with the Diplomacy Training Program she is also concerned about human rights issues. Nicole hopes to undertake a Masters in Policy Analysis with a focus on environmental security.

Vicki Sideris is a recent graduate with a Bachelor of Commerce (International Studies) at the University of New South Wales, where she majored in International Relations and International Business. She studied for one year at Georgetown University in Washington DC, where she also volunteered as a literacy tutor for the local DC Reads program. Vicki was awarded a New Colombo Plan Mobility Grant to intern at the Australian-Thai Chamber of Commerce in Bangkok. She has previously worked at Insurance Australia Group and interned at the Social Impact Hub. Currently, she is a compliance associate at Macquarie Group. Her main areas of interest include American and Japanese foreign policy and domestic politics, and wider Indo-Pacific trade and security issues. Vicki interned at the AIIA NSW before being elected to the council as an intern coordinator.

Euan Moyle is a Master of International Relations student at the University of Sydney. He holds a Bachelor of International Studies from Macquarie University, and has also studied at the University of Geneva in Switzerland. Euan has previously served as an intern with the Lowy Institute, a Research Fellow with Young Australians in International Affairs and a participant in the 2018 United Nations Graduate Study Programme in Geneva. Currently, he serves as a geopolitical risk analyst with the online publication Foreign Brief and a Projects Officer with Young Australians in International Affairs. His research interests include Australian foreign and security policy, the Pacific Islands region, international development, multilateral institutions and human rights.

Alex McManis is a former intern at AIIA NSW and will be an intern coordinator in 2020. He recently completed his Bachelor of Arts with First Class Honours in Government and International Relations at the University of Sydney. His honours thesis analysed the European Union’s behaviour at the 2015 U.N. climate negotiations in Paris. Alex has previously interned at Ports Australia, and was a pro-bono consultant for a Sydney start up. Alex is also a passionate debater. He has debated in the finals of the Australian Debating Championship and judged debating competitions across Australia, Asia and Europe. His research focuses on global environmental politics and the politics of the European Union.