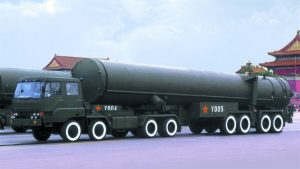 At the recent Munich Security Conference in February, a top Chinese diplomat reaffirmed China’s long-held non-first-use commitment with respect to its nuclear weapons.

However, while China’s official nuclear strategy has remained largely intact in recent years, there has been a rapid modernisation of its nuclear forces, which have become increasingly diverse, resilient and effective. This modernisation drive has greatly enhanced China’s nuclear deterrence capabilities and will continue to transform its nuclear forces in the years ahead. Without a doubt, this will have important implications for strategic stability between China and other great powers, especially the United States. It may also lead to changes in China’s nuclear strategy.

China’s ongoing nuclear modernisation effort has substantially increased the size and quality of its nuclear forces. China’s nuclear arsenal is estimated to have almost doubled in size in the last decade or so, growing from around 145 warheads in 2006[2] to 270 in 2017[3]. While this increase is significant, it should be kept in perspective: China’s nuclear arsenal remains dwarfed by American and Russian arsenals, which consist of 6,800 and 7,000 warheads respectively.[4]

This disparity can be partially explained by China’s nuclear strategy, under which it has committed not to use nuclear weapons first. According to its latest defence white paper published in 2015, China’s Military Strategy, “China has always pursued the policy of no first use of nuclear weapons and adhered to a self-defensive nuclear strategy”.[5] Under this policy, China’s nuclear forces aim to provide minimum deterrence in the form of a credible second-strike capability. For minimum deterrence to be effective, China’s adversaries must believe that China would be able to counterattack and inflict an unacceptable level of damage in response to nuclear attacks against it.

Perception is key. An important reason for China’s continuing nuclear modernisation is its perception of what is required to maintain minimum deterrence in the face of advances made by its competitors, especially the US, and to a lesser extent Russia and India. China is particularly worried about progress in the US’s missile defence systems,[6] conventional global precision strike capabilities, and advanced space-based reconnaissance platforms. Beijing believes that these capabilities may undermine the credibility of China’s nuclear deterrence.

Late last year, Chinese state media reported that China’s latest and most advanced ICBM, the DF-41, is nearly operational and will be deployed in early 2018.[7] The DF-41 rivals the state-of-the-art capabilities of American (LGM-30 Minuteman) and Russian (Topol-M) ICBMs. It has a range in excess of 12,000 kilometres and can deliver up to 10 warheads to different targets with a precision of fewer than 100 metres.[8] In addition to silo-based launchers, the DF-41 can be launched from road and rail-mobile platforms, which makes it harder to target. Once deployed, the DF-41 will be a powerful addition to Chinese nuclear strike capabilities.

In addition, China is applying MIRV technology to existing missile models, including the DF-5 land-based ICBMs. In early 2017, China tested a new variant of the missile, DF-5C, using 10 inert warheads.[9] The number of Chinese nuclear warheads is likely to increase as China produce smaller warheads for its new MIRV-capable missiles, although based on past experience[10] it will unlikely produce all the warheads necessary to fully arm these new missiles.

Another technology that China is actively pursuing is hypersonic glide vehicles, which are manoeuvrable, extremely fast, and capable of penetrating existing missile defence systems. To date, China has conducted at least seven successful test flights of its hypersonic glide vehicle, WU-14 (also known as DF-ZF).[11] Moreover, it is building the world’s most advanced hypersonic wind tunnel for research and weapons development.

China is not the only one developing hypersonic technology for military purposes. The US and Russia are both investing heavily in developing hypersonic weapons.[12] While still years away from being operational, hypersonic missiles would pose a challenge to strategic relations between China and other great powers once developed because they would negate existing missile defence systems and greatly compress the timeframe available for response by the side under attack.

In addition to land-based nuclear deterrence, China is developing its first credible sea-based deterrent capability in the form of four JIN-class (Type 094) SSBNs, each capable of carrying 12 JL-2 submarine-launched ballistic missiles (SLBMs). The JL-2 missiles are MIRV-capable and have a range of 7,200 kilometres. China’s next generation SSBN, the Type 096, is currently being developed with construction set to begin in early 2020.[13]

Despite the substantial development in both size and technological sophistication of China’s nuclear forces over the last decade, China has not officially shifted away from its no-first-use commitment. The lack of an official policy change, however, does not indicate consensus or a lack of incremental changes in nuclear strategic thinking among China’s military planners and experts. In fact, there are continuing debates among Chinese strategists on the nuances and merits of adhering to the no-first-use commitment.

Some Chinese strategists argue that the no-first-use commitment is untenable in its strict form because it would not be effective in deterring conventional attacks against strategic targets, such as military command and control systems and key infrastructure.[14] In addition, conventional attacks, which under the current policy would not rise to the threshold of warranting a nuclear response, may also be used to degrade China’s nuclear deterrence capabilities.

Other Chinese strategists argue that moving away from the no-first-use commitment would destabilise US-China strategic relations, leading to a nuclear arms race.[15] They argue that without this commitment, escalation could be riskier as adversaries cannot be sure as to whether China would resort to a nuclear first-strike or not. Hence, these strategists argue, given China’s inferior nuclear forces compared to the US (and Russia), it’s not in China’s interest to destabilise strategic relations by introducing additional uncertain.

However, new technologies and capabilities coupled with emergent threats to China’s strategic interests may lead to incremental changes in Chinese nuclear thinking. This could include changes to the conditions attached to China’s no-first-use commitment, and even movement towards allowing the deployment and use of tactical nuclear weapons. China may decide, for example, that the no-first-use commitment should be modified to exclude circumstances where its military and nuclear command and control systems come under conventional or electronic attack. This may also extend to other strategic targets that come under non-nuclear attack, including important cities, space systems, large dams and other key infrastructure.

In addition to the no-first-use commitment, Chinese nuclear thinking could also evolve towards a new limited nuclear warfighting posture allowing it to field tactical nuclear weapons. There are signs that the technological and doctrinal barriers of adopting this approach are become increasingly less problematic. In the words of one scholar, these changes could “presage a paradigm shift in China’s long-standing nuclear posture and the nuclear balance in Asia.”[16] Importantly, if China deploys tactical nuclear weapons, it would be riskier and more complicated for the US to intervene in Asia, such as in scenarios involving Taiwan, the Korean peninsula or the South China Sea.

China’s rapidly modernising nuclear forces, along with possible future shifts in China’s nuclear strategy, could have profound implications for the stability of US-China strategic relations, especially given that broader trends are pushing the two powers towards strategic competition.[17] Indeed, China’s nuclear modernisation may trigger increased investment in military capabilities by the US to counter Chinese advances, which may kick off an intense arms race between the US, China and other Asian powers. Potential shifts in China’s nuclear strategy could create strategic uncertainties and make escalation riskier.

Increased military competition, lower levels of strategic trust and possible misunderstandings during a crisis situation, could have grave consequences for China, the US, and Asia more broadly, especially given the role of the US in providing extended deterrence in Asia to its allies. The US and its allies, such as Australia and Japan, will need to carefully monitor China’s nuclear modernisation and be on the lookout for signs of any shifts in China’s nuclear strategy.

[4] Arms Control Association (2018), Nuclear Weapons: Who Has What at a Glance, https://www.armscontrol.org/factsheets/Nuclearweaponswhohaswhat (date accessed: 10 February 2018)