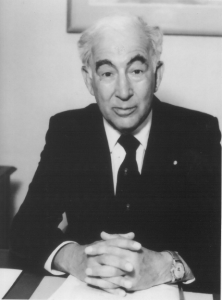 Once a year AIIA Victoria holds an Oration and dinner, honouring former Governor-General and legal expert Sir Zelman Cowen. Sir Zelman’s storied career of academia and public service was one dedicated to international affairs and the people of his home country, Australia. In keeping with his legacy of engagement and curiosity in world affairs, AIIA Victoria’s annual Sir Zelman Cowen Oration features an eminent speaker discussing a topical issue that affects Australia’s role in the world.

The evening is an opportunity to meet old and new friends, to mingle with diplomats, academics, foreign correspondents and members of the international community in Melbourne, continuing the tradition of acknowledging the contribution of Sir Zelman Cowen.

Inspector-General of Intelligence and Security

Director of the Australian War Memorial

President and Vice-Chancellor of Monash University

International Education for Australia: From the Colombo Plan to the Asian Century

Former Minister for Trade and Investment

I’ll Ride with You: Social inclusion and resilience in an era of violent extremism

of Melbourne; Chair in Australian Studies at Harvard; Chair of the Australia Council,

The State of the World: is the ‘Good Cheer Barometer’ Rising or Falling?

Former Ambassador to the United Nations, and former Minister for Defence and

Australia’s Role in a World of Challenges

Living with Two Mega Powers: The World in 2020