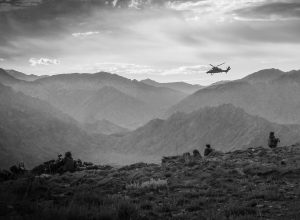 Afghanistan’s history is marked by periods of foreign invasion and withdrawal, so much so that the state has been christened the ‘graveyard of empires.’ This symbolism explores how even the strongest of empires, may be successful initially at invasion but that none can maintain an occupation in this state.

The modern day cycle of conflict arguably began following the deposing of King Mohammed Zahir Shah in 1973, which continued as the proxy war during the Cold War and then in the ongoing involvement of US and NATO troops since 2001. As the ink dries on the peace treaty between the United States and the Taliban, it is a useful time to consider whether this nickname remains relevant to Afghanistan, and if so, could this result have been predicted.

The late Louis Dupree, an anthropologist who was an expert on Afghanistan, stated that there are four distinct reasons why they have challenged foreign invasions and undermined their success, irrespective of how strong the foreign force may be. He considered that these background reasons for the foreign failures on Afghan soil to be summarised as; when foreign troops remain within Afghanistan for extended periods of time, when the invaders move to place an unpopular political leader in charge, when harsh acts are committed against civilians, and when there is a reduction in subsidies paid to the tribal chiefs in regional areas. It is useful to consider these various elements as factors behind the ‘graveyard of empires’ nickname, while assessing the US’s continued involvement over the past two decades and providing a brief analysis of how history would have assumed this result and the resulting withdrawal.

The first factor raised by Dupree is the time period in which foreign troops remain in Afghanistan. Through their 19 year long involvement began in 2001, the numbers of US soldiers on the ground has fluctuated at various stages, at its highest reaching 100,000 in late 2010. By having a high number of personnel on foreign soil over a long period of time, it caused large domestic strains with political backlash both in regards to the effectiveness of the missions, the threat to US life and the huge economic burden that the war has caused. It is estimated that the involvement in Afghanistan cost approximately $975 billion to upwards of a $1 trillion dollars, with some figures estimating this sum to be even higher. As such, the withdrawal from Afghanistan has been a political priority for the last decade, with both Obama and Trump promising an end to the conflict and the return of troops home. Further, with the signing of the treaty on February 29 2020, the importance of this in the year of elections can be recognised.

This factor directly links into another of Dupree’s considerations, being the reduction of payments into the regional areas of the nation and the impact on these areas when invading states are attempting to secure control. Considering this warning in reference to the US occupation, they chose to centralise power in the capital of Kabul through the promotion of a democratic government base there. Arguably this military and political decision failed to adequately consider the fact that the political history of the state focused on autonomous provinces beyond this region. Additionally, the widespread accusations of corruption and bribery throughout the political system lead to increasing distrust of western involvement. As such, while the ‘winning hearts and minds’ mission continued, its effectiveness was limited in the outer regions where the provincial reconstruction teams faced mixed reviews. In turn the failure to solidify the relationships built in these areas by the US lessened the provincial’s governments control. This left them unable to extend control meaningfully beyond Kabul, with many viewing the new government to be a ‘puppet of the West’.

Another factor raised in the historical reflections, relates to the negative effects caused by invading forces in Afghanistan, and the committed crimes and attacks against its civilians. While the theatre of warfare shifted to increasingly guerrilla conflict and as it became more difficult to differentiate between insurgents and civilians, it has been claimed that the US’s actions failed to make distinctions when able to between civilians and combatants. This failure can be seen in the 2008 shooting in the western Herat Province where errant US gunfire resulted in the deaths of dozens of civilians. This unfortunate event lead the Taliban to proclaim that the US was unable to protect the population and caused a growing disenchantment between them and the continued US presence on the ground. Following this event, US General Stacey McChrystal declared that, “we must avoid the trap of winning tactical victories, but suffering strategic defeats, by causing civilian casualties or excessive damage and thus alienating the people.” Despite these intentions, increased claims of such events lead to a dip in national support of the US actions and increased the resistance to the occupation, lessening the US control and arguably forcing compromise with the Taliban.

By considering these brief observations above, we can begin to understand the continuous cycle and the failure to observe recommendations made by history, with the reference of Dupree’s factors. In reference to the US occupation, it does appear that their time in Afghanistan lessened their global power and while it may not have been their ‘graveyard’ moment, only time will tell if the peace agreement recently arrived at will bring the long lasting security and peace that the state of Afghanistan needs domestically.

Amelia is an intern with the Australian Institute of International Affairs NSW.