As Syria’s war enters its eighth year, the Assad regime is likely to prevail, defeating and neutralising much of the insurgency in the country. Reconstruction, estimated at around $US350 billion has emerged as the central fault-line in an ongoing political debate over the legitimacy and sustainability of Assad’s narrow victory. For the West and the European Union (EU) in particular, withholding reconstruction funds is seen as the final hand left to play to obtain political concessions from Assad. Pursuing a broad policy of ‘strategic patience’, the EU hopes that withholding their reconstruction funds will isolate the regime, lead to mounting domestic pressure and force political compromise ultimately in the form of political transition. 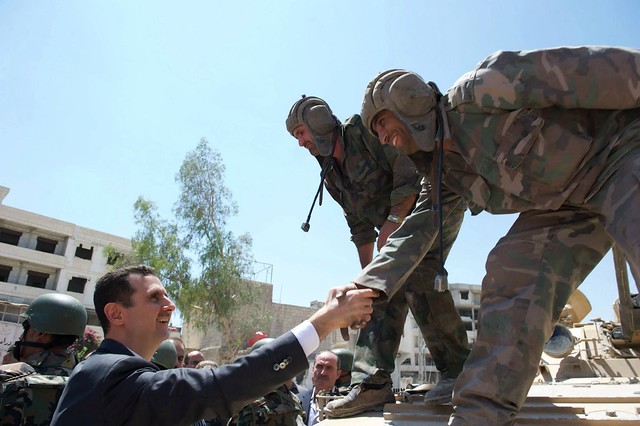 A vote on the renewal of EU sanctions against the regime is expected in June this year. This follows the latest Brussels Conference co-chaired by the EU and the United Nations (UN) on “supporting the future of Syria and the region” which came to a close on March 14. The conference brought together representatives from Syria and the region, UN agencies, regional organisations and donor countries. While significant pledges of financial aid were made to Syria and to neighbouring refugee hosting countries, they were accompanied by continued calls, particularly by EU member states, for reconstruction support to be contingent on steps towards political transition.

But the strength of the EU’s last hand rests on a dubious assumption that the regime will remain isolated economically and diplomatically. Absent from the EU’s calculations is a recognition of Assad’s limited desire to obtain EU reconstruction assistance. Damascus has mocked the West’s inflated sense of its own centrality and in any case, has many opportunistic allies wanting a piece of the ‘reconstruction pie’. Assad has been actively working to ensure funding does not come from powers hostile to the regimes envisioned future. As such, announcements in 2017 that China, along with Russia and Iran, would be given priority for all reconstruction and infrastructure projects in Syria come as no surprise.

Of the opportunistic allies at the regimes disposal, eager to engage in in-country investments, contribute reconstruction funds and re-engage diplomatically, Russia, Assad’s closest ally through the war remains the country most likely to benefit from the lucrative reconstruction opportunities. Moscow’s unwavering support for Assad has already been rewarded with significant access to Syria’s oil and gas resources, having been granted exclusive extraction rights since 2018. It has also secured advanced deals for power generation projects, rail lines and various industrial plants that will be instrumental in reconstructing Syria. More generally, Russia will benefit from foreign capital influx into the Syrian economy which would provide vital hard currency for Russian businesses. Though Russia has limited material resources of its own to provide, its ability to procure and court other opportunistic allies to fund Syria’s reconstruction amount to a principal role in advancing Syria’s bilateral engagement and have undermined the West’s hopes of isolating Assad. Russia has had some success in using the political climate towards refugees in Europe to garner support for reconstruction and the refugee repatriations. This had led to EU member states, Italy, Austria and Hungary looking beyond the strategic patience and isolationist mantra and exploring bilateral engagement with Assad.

China sits well poised to assist and benefit from its calculated engagement in Syria. Shielding Assad from various Security Council resolutions through its veto power, China is viewed by the regime as an honest broker, whose ambitions in Syria will not be accompanied by calls for political concessions. Syria is being eyed by China as a critical node within the Levantine region in its Belt and Road Initiative (BRI). However, China’s economic and trade ambitions are dependent on a relatively stable Syria. With this no doubt in mind, at the China-Arab States Cooperation Forum last year China committed nearly $20 billion in infrastructure development loans alongside a $100 million humanitarian assistance package for Syria and Yemen. In 2017, China convened its first “Syria Reconstruction Projects Fair” in Beijing, putting forward a $2 billion plan to build an industrial region in the country to accommodate over 150 companies. Sending a delegation of over 200 companies to attend the 60th Damascus International Fair, China pledged deals for the construction of steel and power plants, telecommunications systems, car manufacturing and hospitals. Beijing has also donated 800 electrical power generators to Lattakia, Syria’s largest port, recognising Syria’s Mediterranean coast location for its BRI and enabling it to overcome the bottleneck of the Suez Canal.

Much like Russia, Iran hopes to pursue a larger role in the Syrian economy by obtaining investment contracts for its major companies. Tehran and Damascus are trying to establish a banking channel, with the apparent aim of circumventing US sanctions. In addition, public and private Iranian backers have provided funding for electricity reconstruction in Aleppo and the reconstruction and repair of forty-seven schools and a number of hospitals across the city.

Influential Arab countries that once funded the opposition, such as the UAE and Saudi Arabia, have drastically altered their positions in this conflict. Gulf actors have been considering moving back into Syria and allowing its return to the Arab League, seven years after expelling it, breaking the taboo of a return to Damascus. Among the many reasons behind this shift, rapprochement with Syria is seen as an antidote to counter Iranian, and to a lesser extent Turkish influence, (perceived as a close ally of Qatar) something the Assad regime understands well and is playing to its advantage.

The perception that the EU can influence and obtain significant political concessions from a regime which has shown brutal resolve over the last eight years to preserve itself is questionable. The limited traction on a UN sponsored peace process combined with Assad’s diplomatic and economic re-engagement with opportunistic allies in the region and beyond give scant reason for optimism. Europe’s hopes of an isolated Assad seem dubious and a reassessment of the corresponding logic of strategic patience seems warranted.

Hannah Green is currently undertaking a Master of International Relations at the University of Sydney. As a Deans Scholar during her undergraduate degree, Hannah majored in International Relations and Politics. While studying in Canada at the University of British Columbia, Hannah began to direct her studies towards international conflict management and post-conflict environments. She is currently a senior correspondent at the Organisation for World Peace and a project volunteer for the NSW Service for the Treatment and Rehabilitation of Torture and Trauma Survivors (STARTTS). Hannah would like to continue to direct her research towards the promotion of more humane refugee policies in Australia and contribute to the creation of more effective humanitarian support for individuals in conflict and post-conflict settings. Hannah is an intern with the Australian Institute of International Affairs NSW.