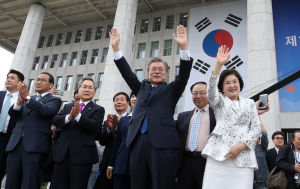 On the 9th of May 2018, South Korea swore in a new president, the North Korean born lawyer-cum-politician, Moon Jae In. Moon came in on an agenda of democratic reform, promising to be a “Gwanghwamun President”. This title refers to his intention of moving the presidential office away from the grand and imperial like Blue House, to the metropolitan area of Gwanghwamun only ten minutes away. The move (which is yet to occur) is intended to bring politics to the people, with Moon promising to “meet with citizens and share small talks in markets” on his way home from work. Unlike his predecessors, Moon wishes to project an unprecedented image of approachability and honesty. Yet, despite democratic changes, South Korean politics has been dogged by authoritarian and corrupt political figures, and it remains to be seen if Moon can bring about meaningful change and be the Gwanghwamun president he intends to be? the answer is not as simple as it seems.

It is easy to overlook South Korea’s troubled and authoritarian past. Immediately after the Korean War (1950 – 53), South Korea was desperately poor and in a worse situation than its Northern counterpart. It was not until the military figure, Park Chung-Hee, launched a successful armed coup in 1962 that the country began to change into the economic powerhouse it is today. Through his efforts between 1962 to 1979, Park built a robust export-based economy that lifted millions of Koreans out of poverty. However, Park left behind a legacy of strongman rule as well as deep entanglement of private and public interests.

This legacy persisted just weeks before his election as President, Moon’s predecessor, Park Geun-Hye, was sentenced to twenty-four years in prison. Park Guen-Hye was convicted of corruption and treason, including the pressuring of private corporations to donate 94 million US dollars to foundations she was involved with. And her predecessor, Lee Myung-Bak, president from 2008 to 2013, was also indicted on corruption charges for receiving over 50 million dollars’ worth of bribes through slush funds and embezzlement. Two former presidents who served in office between 1979 to 1993, Chun Doo-Hwan and Rho Tae-Woo, were also given life sentences for their roles in corruption and misuse of office in 1996. And even Mr Moon’s political mentor, Roh Moo-Hyun, committed suicide during a corruption investigation against him in 2009. Out of South Korea’s eleven presidents, six have been investigated or evicted out of office due to corruption related charges.

Mr Moon has come from humble beginnings which are well known in Korea. His parents, North Korean natives, moved to the South as refugees during the Korean War (1950 – 53). His father then worked at a prisoner of war camp while his mother sold eggs in a Busan market to make a living. Unlike other Presidents, Moon and his well-respected wife Kim Jung-Suk reflect an image of modesty largely unfamiliar in South Korean politics. His background as a human rights lawyer and democratic activist bolster his reputation for honestly and incorruptibility. He was also a close friend and key advisor of Roh Moo-Hyun, a democratic activist and president from 2003 to 2008. As Roh’s advisor, he earned his nickname the “shadow of Roh” for his efforts in reducing corruption during his administration. This is not to mention his recent efforts in fostering closer relations with North Korea during his short time as President; often being credited as the man behind the meeting between Donald Trump and Kim Jong-Un in July 2018.

When Mr Roh, Moon’s former colleague, committed suicide after years of corruption proceedings, Moon wrote somewhat ironically in his memoir that “My life would have changed a lot if I didn’t meet him, so he is my destiny”.

While the verdict is still out on whether Mr Moon can achieve his grand vision, one can only hope that his destiny wont sadly repeat his predecessors.