On Tuesday 30th July, AIIA NSW welcomed Mr Alex Ryvchin, Co-Chief Executive Officer at the Executive Council of Australian Jewry, whose book Zionism – the Concise History will be released in September. Mr Ryvchin specialises in the Arab-Israeli conflict, anti-Semitism, and religion and identity. In his address to the Institute, Mr Ryvchin explored the origins and aims of Zionism and its accomplishments and failures as well as prospects for peace and coexistence between Israel and Palestine.

Mr Ryvchin defined Zionism as the national movement of return for the Jewish people to Zion, or the biblical lands which now include Jerusalem, the State of Israel and parts of modern day Syria. He outlined the foundations of Zionism and its evolution as both mystical and rational, involving natural and forced migration and focusing on grand projects of statehood. Contemporaneously, Zionism has established itself as a “precise political concept of national self-determination and a safeguard of [Jewish] cultural identity”.

Zionism emerges from a rich history of the Israelites and their legacy of national return. It is a product of the incredible resilience of the Jewish people against millennia of vilification, violence and prejudice. Apart from brief periods of prosperity the Jewish people have, since their exile from Zion, “limped from one calamity to the next”. The systematic isolation and eradication of the Jewish people globally and historically underlined Zionism’s commitment to self-determination. Leon Pinsker, the founder of Zionism, had lost faith in assimilation. In his revolutionary book Auto-Emancipation, Pinsker reflected on the Jewish sentiment of “alienation everywhere”. For Pinsker, following the diaspora and a series of migrations across the Middle East, the Americas and Europe, Jews had a shared experience of stigma. The wrongful conviction and ritual degradation of the French military officer Alfred Dreyfus in 1894 had ended all ideas amongst Jewish leaders that the ‘Jews must disappear into the crowd’. Instead, a determination to organise a return to political independence in a Jewish State was invigorated through Zionism.

The British government’s 1917 Balfour Declaration was a clear policy commitment to the right of Jews to reclaim their homeland, echoed in Woodrow Wilson’s 14 points, particularly the right to the unmolested opportunity for national development. The Balfour Declaration was not part of a post-colonial carve up of the Middle East in the wake of the decline of Ottoman rule, but a moral recognition of the Jewish people’s concept of a nation of Israel.

The Al Hussein Riots of 1929 re-incited tense racial animosity between the Arab and Jewish people.  Mr Ryvchin acknowledged that the terror attacks carried out by extremist Jewish groups after World War II had exacerbated tension between the two peoples, but maintained that Zionist leaders, and Zionism as a movement, are not only unsupportive but condemnatory of such violence. The core of Mr Ryvchin’s argument is that Zionism is not a western colonialist imposition but rather an organic national movement back to the homelands that form the Jewish identity.

In question time, Mr Ryvchin was asked about how Zionism approaches the ongoing conflict between Israel and Palestine. Mr.Ryvchin finds the differences between the two peoples and their lifestyles too great to reconcile. He supports the contemporary Zionist movement in pursuing a two-state solution. This would not only allow for the Jewish people to reclaim their homeland but also enable a substantive expression of both Jewish and Arab societies. 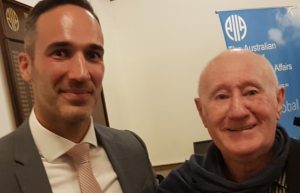 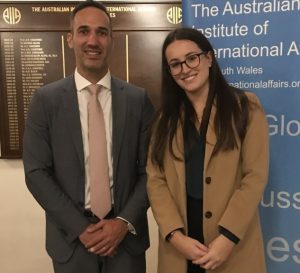