On Tuesday 15th February, Mr Richard Mathews, convenor of Diplomats for Climate Action Now! (DIP4CAN) spoke to the Australian Institute of International Affairs NSW on Australia’s international role in mitigating the impacts of climate change. He commenced by detailing DIP4CAN’s establishment: almost 100 former diplomats, aid and other officials had signed a full-page advertisement in The Australian in November expressing shared concern at the state of Australian climate policy; the group had since expanded and had embarked on a program of presentations to political leaders aimed at achieving climate policy change.

DIP4CAN considered that, to repair its international reputation, Australia must adopt more ambitious climate policies, such as the total ban of fossil fuel projects by 2035 and the halting of deforestation by 2030.

Mathews stressed that climate change issues provide opportunities for Australia: a change of policy would allow Australia to consolidate our standing within the Indo-Pacific through leadership and assisting our neighbours with mitigation and transition frameworks. We would consolidate our economic stability, reducing the current reliance on fossil fuels and becoming a renewable energy exporter. Mathews concluded his address by stating that the first step to becoming a leader on climate action is through domestic policy and that we all have an obligation to help fight climate change.

The full text of his address is hyperlinked  below.

Mathews fielded a range of questions, from the ambition of DIP4CAN’s targets to the role of private interests in helping and hindering climate policy. On ambition, Mathews acknowledged that while the targets proposed by DIP4CAN were conservative, they were aligned with the global consensus of developed economies, and their targets could always be exceeded. He acknowledged that despite the lack of commitment to substantive action by the current Australian government, many ‘moderates’ within the Government would like to contribute to tackling climate change and these targets could provide a reference point going forward.

He also acknowledged the role of the private sector: Renewable Energy Zones in New South Wales continue to attract investors, and Andrew Forest and Mike Cannon-Brookes’ Sun Cable project seeks to export solar power. The private sector could play an important role in Australia’s transition towards renewables. But the ways in which the private sector hinders climate policy, due to the bargaining power of the resource sector and its use of political donations, are problematic.

Questions pertaining to key state actors were also raised and Mathews stated that the policies of major emitters in the Indo-Pacific, such as China, Japan, and South Korea, would be crucial to success in combatting the effects of climate change.

He agreed that Indonesia has the potential to be an example for developing economies should it be successful in its transition to carbon neutrality. To decarbonise effectively, Indonesia will require international assistance, which provides an opportunity for Australia to strengthen its economic and diplomatic ties with an important neighbour and to create a market for Australian renewables and related technologies. Drawing on his experience of funding local aid projects in Indonesia, he recommended continuing targeted aid for sustainability projects. 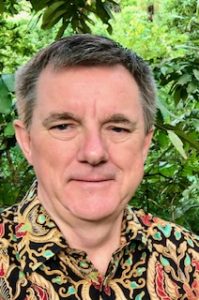 Richard Mathews’ talk:  Why Australia Should Be A Global Leader In Climate Action Text