On Tuesday 12 February Mr Dinny McMahon addressed the Institute on the issues surrounding the US-China trade war and the trajectory of the Chinese economy. Mr McMahon has ten years’ experience as a financial journalist in China with The Wall Street Journal and Dow Jones Newswires in Shanghai, alongside an academic portfolio which has culminated in his book China’s Great Wall of Debt – Shadow Banks, Ghost Cities, Massive Loans, and the End of the Chinese Miracle. On a topic of such complexity, muddied by increasingly heated rhetoric, the analysis provided by Mr McMahon was welcomed by our audience.

With March 1 looming as the deadline for the US and China to reach a trade deal to avert tariffs on Chinese imports increasing from 10 to 25 per cent, Mr McMahon spoke about the path of the Chinese economy and the potential for compromise given China’s chosen economic route.

Perhaps most illuminating were Mr McMahon’s observations about conflicting perceptions of China’s goals held by the US and China. While the US sees China’s actions as incompatible with free trade economies and intellectual property rights, China regards them as necessary to recalibrate an economic growth model that has surpassed its use by date: China can no longer rely on a low-cost work force assembling expensive imported components. Despite these conflicting positions, both countries are intricately intertwined in a global economic system which depends on their amity.

Although the trade war has sometimes been seen as a one-man crusade spearheaded by US President Donald Trump and projected through a nationalist and protectionist rhetoric, Mr McMahon directed attention to the wider constituencies who are becoming increasingly fed up with China’s actions: the military and intelligence community within the US; multinational corporations including US firms operating in China; and the academic thinktank complex. Their support springs from long-held frustrations over barriers to enter China’s markets, China’s heavily subsided state-backed companies, and Chinese demands for technology transfers as a condition of doing business. The overarching concern of the US administration is that these processes are eroding their country’s technological superiority.

Mr McMahon questioned the applicability of the term ‘trade war’ to the relationship, though this has indeed become its visible manifestation. Perceiving the US administration’s objective as being simply to wring deficit-reducing trade concessions from China (such as an increase in soybean purchases from the US to please Trump’s blue-collar voter base) misses the mark. Rather, the US seeks to force a change in China’s whole economic and industrial policy direction. For its part, China relies on this direction to remedy domestic issues which are damaging its growth prospects, including its widespread industrial overcapacity, under-utilised infrastructure and ageing population.

Asked where Australia should position itself in this conflict, considering its security relationship with the US and economic relationship with China, Mr McMahon suggested signalling a more assertive stance to China may prove constructive for the long-term relationship between both strategic partners. A first step could be more robust expression of concern around intellectual property rights. 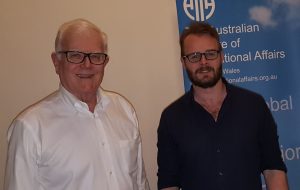