The uncertain and unprecedented state of global affairs, characterised by complex global problems and the rise of populism, is undisputed among global commentators and analysts worldwide. On September 25th, Dr Sabine Selchow shared with the AIIA a unique assessment of this troubling context. Selchow revealed a novel and useful framework for interpreting the world and its issues, positing that only through radically altering our commonly-held conceptualisations will global problems be addressed, which will allow for approaches to globalised governance to be achieved and the structural shortcomings of nation-states to be countered.

Selchow alluded to the work of David Campbell, author of Writing Security, to premise her theory. In 1992, Campbell asserted that “uncertain times demand an unconventional analysis”. Campbell was referring to the unsuitability of the existing theories in facilitating understanding of the world at the time and the cause of events leading to the break-down of the bi-polar bloc system. Paralleling this pivotal moment in international relations, Selchow posits that the same logic must be applied to this point in history. We are living in a time where we must again re-think how we make sense of the world, as our present concepts are inadequate in allowing us to understand our lived reality. Moreover, Selchow asserts that the concepts used at present are reproducing the problems we are experiencing globally, such as climate change and the alienation of populaces that fuels populism.

Thus, to re-think how we make sense of the world, Selchow argues that we must acknowledge two interrelated things. The first is that in order to understand global problems, we need to recognise them not as the dark sides of our doing, being the consequences of industrialisation or modernisation, but as the successes of these developments. In this way, there is a necessity to realise that the same premises and institutions that led us to these problems cannot be used to fix them. The second integral point is that we must acknowledge that nationalist societies do not work any more, and that they are producing and prolonging the issues the world faces. Nationalist thinking results in nations and their populations externalising their issues, perpetuating the notion that where sovereignty ends, responsibility ends. Selchow warns that this is “producing a world of organised irresponsibility”.

To remedy this, a re-imagining of the concepts through which institutions are produced is needed, to envision the world as globalised and then to add in the nation state as a “complication”. This is where the example of Europe comes in. The European context can demonstrate several positive developments which exemplify this shift of understanding, of which Selchow highlights two key developments. The first development is a civic movement in Europe that began in 2007, promoting “post-national” democracy through a pan-European movement. This movement is embodied by European Alternatives, comprising mostly young Europeans who are living the “post-national” reality that Selchow sketched out, promoting culture beyond the nation-state. The second is the development in Europe around a new security framework, being shaped by the European Union’s High Representative for Foreign Affairs and Security Policy, Federica Mogherini.  The recent Global Strategy for the EU outlines a new “sustainable security” approach for the EU, rigorously building human security into its framework which Selchow sees as dissolving the idea of “the inside and the outside”, pioneering a radical re-conceptualisation of security and responsibility. Europe had begun to point to ways of re-thinking how we make sense of the world. 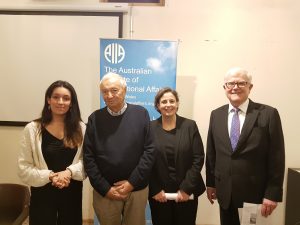 Key questions from the audience challenged Selchow’s assertion that the nation-state “doesn’t work any longer, therefore it doesn’t exist”. This led to Selchow clarifying that her view is not that the nation-state doesn’t exist, but that people feel alienated and unprotected and associate this with globalisation, from which the nation-state is not protecting them, and thus there is something wrong with the kind of existing political discourse that allows for this. There is no point tackling problems like working conditions or environmental damage with the institutions that caused the problem.

Selchow’s talk provided a constructive analysis of the complex world we live in today, providing a refreshing remedy to our present situation. By challenging some deeply-held modes of thinking about the nation-state, international responsibility, and governance in a globalised world, Selchow utilised the example of Europe to illuminate how alternative ways of conceptualising world affairs can work in reality, modelling this possibility for the global stage.