On Thursday 12 March AIIA NSW and the Australia Malaysia Business Council NSW & ACT co-hosted an event entitled “The New Malaysia” at Glover Cottages, under our recently-concluded Memorandum of Understanding on the promotion of joint activities contributing to Australia-Malaysia relations.

The address was given by experienced Southeast Asian analyst Greg Earl. He described the background to Malaysian King Sultan Abdullah Ri’ayatuddin’s unexpected decision to appoint a relatively low-profile politician, Muhyuddin Yassin, as prime minister, presiding over a heterogeneous coalition of mainly Malay parties. He asked whether this was a step towards returning to an element of royal prerogative in Malaysian politics. Veteran Malaysian leader Mahathir bin Mohamed – who had expected to be re-appointed prime minister – had been left stranded, and his longstanding party rival Anwar Ibrahim, to whom he had promised the succession, had once again been passed over.

Muhyiddin was deputy prime minister in the former UMNO (United Malays National Organisation) government which had ruled Malaysia since independence in 1957 until 2018. He had been sacked by former prime minister Razak after criticising him over corruption. Under Muhyiddin, Malaysia had now returned to rule by an UMNO-led nationalist, conservative coalition.

The numerous Malay parties, marked by diversity and rivalry, offered only an uncertain basis for forming a coherent government. This was in part the result of Malaysia’s complex preferential voting system, which facilitated a multiplicity of parliamentary parties. At the same time, the crudities of a first-past-the-post voting system work best in relatively homogeneous societies, and in the Malaysian context would risk adding to instability and divisiveness. Much would depend on the outcome of the next election.

The new political ambiguities meant there was some slight risk of an economic slowdown in Malaysia. In addition, Malaysia’s hosting of APEC later this year would now be under pressure. The APEC heads of government meeting had been seen as “Mahathir’s moment” – the apex to a long political career and a possible point at which to retire gracefully. There might be less enthusiasm in Malaysia now for hosting APEC.

Earl suggested that the current uncertainties needed to be seen in proportion. In the overall Southeast Asian context, Malaysia’s democracy was alive and well. Compared to its neighbours, Malaysia was the only country whose claims to democracy were on an upward trend. Cambodia had the worst record, and Thailand was in decline. Malaysian people liked voting, and did so in a higher proportion than, for example, the people of the United States. While the party composition of parliament was complex, this was no more so than in the cases of Indonesia, the Philippines and Thailand.

In this situation, Earl saw few difficulties in the way of a continued healthy business and political relationship between Malaysia and Australia. 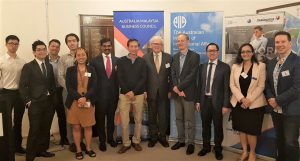 Greg Earl (ninth from left) with AMBC and AIIA office-holders